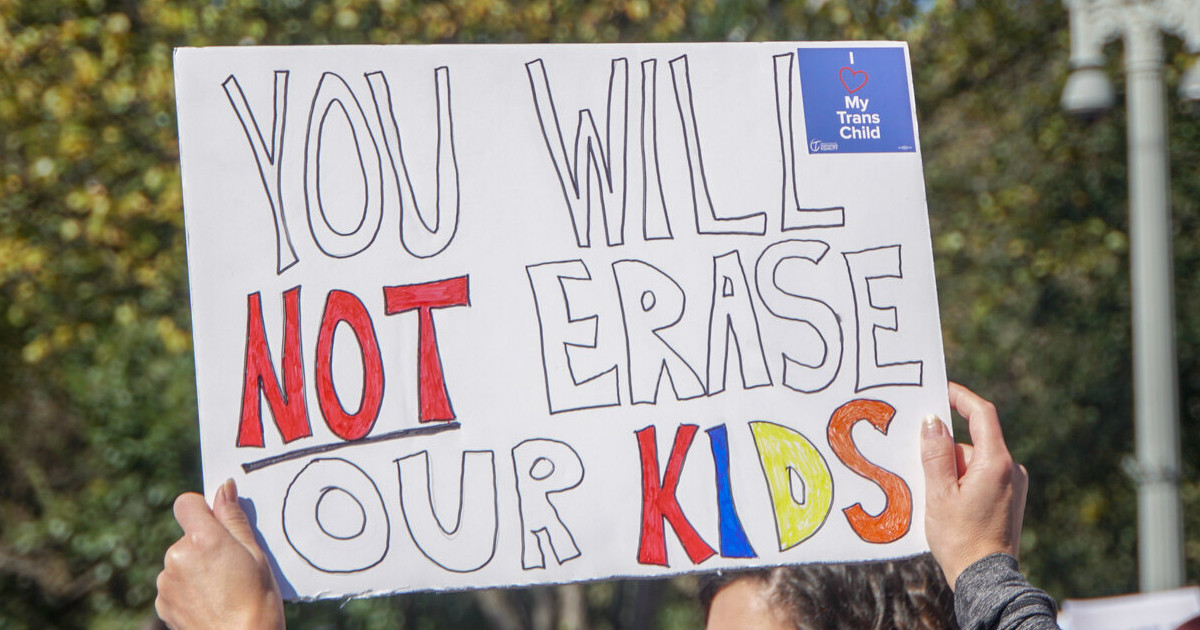 Out, but not out: LGBTQ+ visibility politics

Image Description: Sign stating “You will not erase our kids!” in all caps, with sticker that states “I heart my trans child” in upper right corner. This poster expresses a common grievance in LGBTQ+ led protests: the importance, and frequent dismissal of, visibility of members of the LGBTQ+ community.


As I traveled from the U.S. to the U.K. for the start of Hilary term, I found myself contracting a kind of uneasy, repressed cloud of wrath that floated around me throughout my journey. Why the suffocating feeling? I was called ‘ma’am’, ‘madam’, or ‘young lady’ more times than I had for the past six months in the span of about 15 hours.

And really, what is one to say to some unknowing TSA agent: ‘Actually, if you could stop gendering me as a woman that would be great. Otherwise I’m going to internally scream’? That would cause an unnecessary hold up in an already slow bureaucratic process (that of going through security). Strictly speaking, the TSA agent has no need to know that I’m trans.

And in all likelihood, if I told the agent, chances are I’d get differential treatment of a kind that I’d be less than keen on.

This is because TSA scans individuals in a binary-way – either you present as male or female and are scanned based on these rigid binary constructs, leading to chest or groin anomalies that culminate in invasive secondary pat-downs by ill-trained TSA agents.

But I think, more generally, the reason why the constant barrage of misgendering irritates me more is because it points to a kind of weird liminal state that I exist in. I’m out, but I’m not really out. I write for the Pink section of the Oxford Student– specifically, I write about being queer and trans. Theoretically, anyone could find and read my articles. I make no effort to hide who I am.

But I also would not say that I occupy an extraordinarily visible position in my own social life – my online persona (which includes my publications for the Oxford Student) aside. Sure, I make jokes that, to someone who is paying close attention, would indicate that neither my gender nor my orientation fit into a cis heternormative framework. But when people get my pronouns wrong (as they frequently do), I certainly cringe, but I don’t correct them.

Why not? The answer to this question is complicated, and has to do with the politics of visibility. On the one hand, I recognize the importance of living authentically and also of presenting myself in such a manner so as to be a good representative of the LGBTQ+ community.

When I don’t live authentically, I can feel that it takes a toll on my health – being constantly misgendered, for example, actively annoys me. When I’m not visibly out, I also don’t have the opportunity to meet other members of the LGBTQ+ as easily and may miss out on opportunities to build community and mutual aid.

But on the other hand, visibility can be extremely dangerous. When I don’t know the person very well, I’m not sure that constantly outing myself is safe. Even when I know someone, outing myself is still a dangerous endeavor. I can never be sure what their reaction is going to be until after it occurs, and by then I may be in a risky or perilous position. It’s not that I’m afraid to be who I am. I just like to have my teeth in my head, not on the pavement.

And even when something physically violent does not occur, the process of outing myself can still be incredibly taxing. ‘I’m trans’, I might say. And the other person might have no idea what that means. Thus, I have to explain transgender identities generally, probably stopping to dispel a number of myths. Then I have to explain (read: justify) my own existence. Yes, I know you think I’m a girl. No, in fact I am a man. No, you cannot use she/her pronouns. Yes, I will get upset if you use those pronouns with me.

And even when I explain things to someone, and they’re sympathetic, there’s a good chance they don’t really understand. There’s a joke amidst trans people that we have two kinds of gender expression– one for cis people, and one for trans people. Simply, but slightly wrongly put, I’m a trans man. In reality, I’m perhaps genderfluid and I use he/him and fae/faer pronouns. But try explaining that one to your 41 year old mother.

What is to be done, then, for these visibility woes? For one thing, it would be nice if people could disassociate certain physical traits from binary gender assignment. As in, if people could stop instantly thinking ‘woman’ just because I’m short, that would be great.

If you don’t know someone’s gender identity, don’t assume it via their gender expression.

I tend to use they/them pronouns for people I don’t know until told otherwise. In circumstances wherein I’m having more extended conversations, I ask for pronouns.

And, finally, my usual plea to everyone: increase your literacy in terms of LGBTQ+ issues! It is helpful not only in aiding you to interact with people in your life in a way that is respectful, but also in just increasing your epistemic position generally. Further, seek to educate yourself in particular on the highly difficult topic of visibility politics.