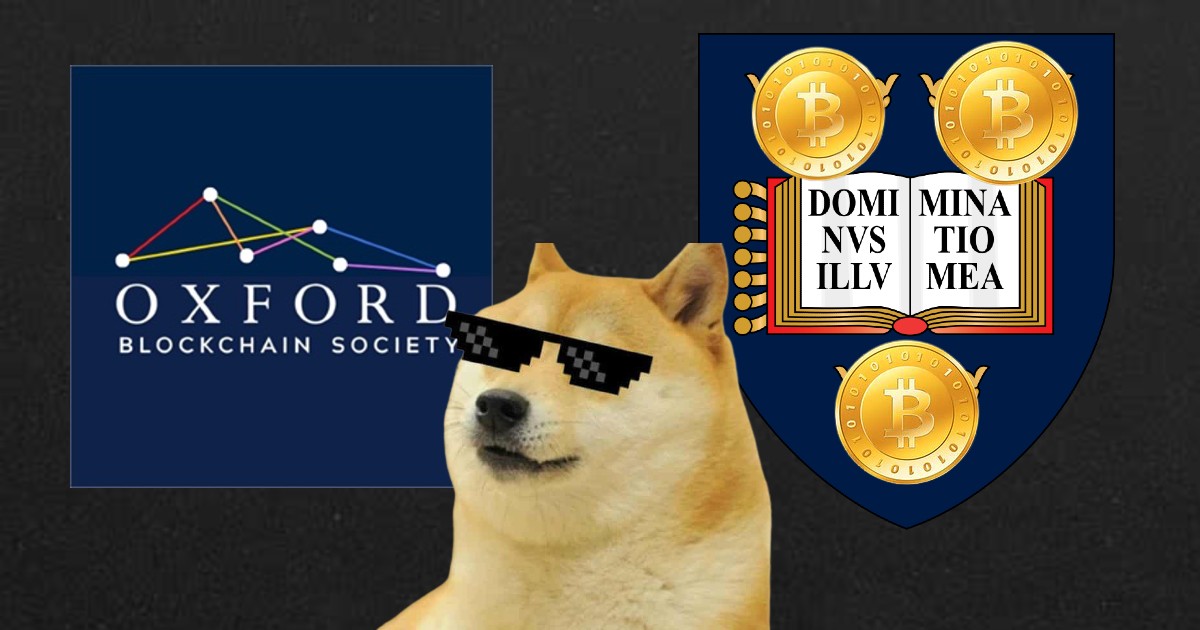 Who wants to be a crypto millionaire? Inside Oxford’s Blockchain Society

Image description: the Oxford Blockchain Society, the Oxford Univeristy shield, and Doge on a black background

The world of cryptocurrency is undeniably polarising – obsessed over by its devoted enthusiasts while the uninitiated regard it with a mixture of suspicion and derision. This was never more obvious to me than when I began to look into Oxford’s Blockchain Society, founded in 2016 as an effort to bring together crypto enthusiasts throughout the university. The mere mention of crypto seems to evoke raised eyebrows and grimaces from many Oxford students and this attitude is prevalent in the wider community as well. When discussing the society with a friend over lunch at an Oxford noodle restaurant, which shall remain unnamed, the manager interrupted our conversation, urging us to stay away from cryptocurrency, which he saw as an unreliable industry overrun by scammers.

Speaking to the members of the Blockchain Society however, I found no such scepticism. I spoke with one member, Elena Vicario, after hearing her enthuse about the society over drinks in our college bar. I invite Elena to discuss the controversial financial technology taking over the world from the comfort of my grimy accommodation kitchen. She borrows my microwave to heat her aubergine with tinned tuna and we talk crypto.

Elena is a fairly new addition to the ranks of Blockchain Society, having joined in November of last term after a collaboration event with Oxford Women in Business. Participants at the event were given $40 worth of the cryptocurrency Ethereum to experiment with as well as access to the wisdom of experienced Blockchain Society members. Having been initially reluctant to attend the event, Elena became instantly hooked and ended up at dinner with the Blockchain Society committee members once the event had wrapped up. ‘I felt like a whole new world had opened up to me. You don’t have to be a computing geek to be a part of it’, she tells me.

‘You don’t have to be a computing geek to be a part of it.’

Elena had a role in the society’s recent project, in which they transformed their structure and now run the society as a DAO – a decentralised autonomous organisation – or, as Elena puts it to me, a sort of company within the crypto world, which is based around communal, rather than hierarchical structure. I can’t pretend that I completely followed the concept, but I nodded along bravely as she went on to talk me through blockchains, crypto tokens, NFTs, and more. As my head starts to swim with these concepts, the big mathematical brains involved in the Blockchain Society seem an imposing prospect. The society is dominated by postgraduates, all studying in dizzyingly complex fields – the society’s president, Keivan Samani, himself a nuclear physicist, lists quantum computing and artificial intelligence among the academic disciplines studied by society members.

But Elena assures me this great store of intellect is nothing to be put off by: “One of the main things for me was the openness. They really want to help you learn”, she insists. This appears to reflect Keivan’s aims for the society, he explains that “We’re trying to build and maintain a culture that makes it friendly for everyone”. He speaks of discovering his passion for assisting beginners become active participants in the industry, citing the power of “a good old fashioned pep talk” for encouraging nervous amateurs to try their hands at coding and other skills. This enthusiasm for new members and spreading the crypto-love begins to make sense as I discover that a large network of enthusiasts is much sought after in the world of crypto. It is the relatively large society membership that allowed the transition into a DAO in the first place.

It seems there is room for everyone in the Blockchain Society, yet this friendly approach cannot detract from the aura of serious money-making that surrounds some of its members. I speak to James O’Leary, the society’s vice-president, who is very keen do discuss his personal achievements in the world of crypto. He claims to have personally raised a large sum of money from venture capitalist, or VC, investors for his football management game Footium in which players own an NFT football club. The confidence with which he reels off his project’s stats tells me they must be impressive, even if they mean very little to me, and he claims Footium is the most successful NFT project founded by a UK student.

Whilst James maintains that he received little help from the society when working on this project, he does strongly recommend Blockchain Society membership to crypto beginners, mentioning their recent collaboration with ChainShot, a company which runs courses in Ethereum coding, in which some members of the society earned scholarships of up to £4,000 to its Ethereum developer bootcamp.

The cryptoworld is fast growing and everyone working on projects now considers themselves early to the game. Even for an initial sceptic such as myself, the enthusiasm I am met with from the society’s members is infectious. I felt myself on the ledge of what is known as the ‘crypto rabbit hole’.

Bitcoin uses more electricity per year than it takes to power entire nations, surpassing the Netherlands, Argentina and the United Arab Emirates in energy usage.

I cannot let myself get too swept up though. The eyerolls that a mention of cryptocurrency is inevitably met with throughout Oxford is often paired with a sincere ethical concern over the industry’s contribution to climate change. The process of mining cryptocurrency is extremely energy intensive; Bitcoin uses more electricity per year than it takes to power entire nations, surpassing the Netherlands, Argentina and the United Arab Emirates in energy usage. I’m slightly hesitant to bring this point up to the crypto-devotees I am speaking to, not wishing to dampen their enthusiasm, but I needn’t have worried – their belief in the industry is unshakeable.

James insists that environmental concerns have nothing to do with blockchains themselves, mentioning blockchains such as Algorand who have claimed that they in fact have a positive impact on the environment because of their sponsorship of various climate-focused projects. I am not altogether surprised that I receive no response when asking Keivan the same question. It seems that Blockchain Society members cannot be tempted to dwell on the more dubious aspects of their passion, sticking resolutely to the bright and shiny hard sell.

As evidence to the enduring spirit of recruitment that is so strong in Blockchain Society, Keivan promptly offers me a position writing articles for the society as a way into the world of crypto – and perhaps I was almost tempted.