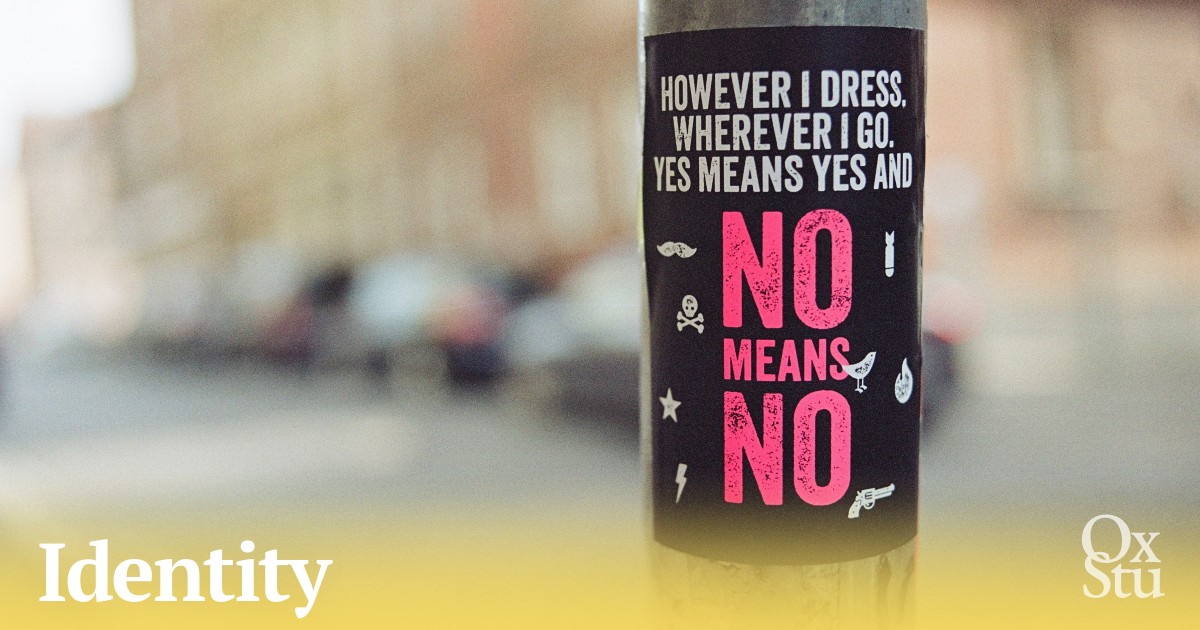 Conversations with My Mother: Perspectives on Misogyny in Oxford

Image description: A poster on a pole with the words ‘However I dress, wherever I go, Yes means Yes and No means No’

I should have had nothing to fear as a girl of eighteen going up to one of the most intellectually exciting places in the world. This is Oxford, a place filled with intelligent people, whom it should be safe to assume are sensitive to social issues and the workings of the law. I’d been given the usual warnings by my mother, who attended Christ Church at a time when women had only relatively recently been admitted: “Don’t get too drunk, don’t walk down dark streets alone late at night, and never find yourself alone in a room with an undesired man and a bottle of wine.” I listened carefully to her words of wisdom, but her views seemed prudish and vaguely old fashioned. After all, men had changed – we were all enlightened now, and as quite a feisty feminist myself, I was sure I would have the means to retaliate against any brutish characters if necessary.

I was even more convinced that my risks were tending to zero upon arriving at Oxford; People here are always saying the right things. Comments with misogynistic undertones are usually met with disapproval, not to mention discussions on more serious incidents. Question any Oxonian on Cornmarket and I’m sure they would be able to give a whole spiel on the disgusting nature of rape or sexual assault. The atmosphere here seems wholly less instilled with rape culture, and entirely different from how it seemed during mother’s time. “One year,” she said, “there was a crossword stuck up everywhere in loos and corridors, and the clues were often quite explicit references to the way we looked.”

Recently, I have become disillusioned. Ignoring my mother’s seemingly out of date advice, I, in my fearless manner, found myself far too drunk and in a strange place with a strange man. For a while, I didn’t speak openly about what had happened to me, but as I developed friendships where I was able to talk about my experience, I was shocked by the stories which I was told in return. There are more accounts of rape and sexual assault than I could have possibly anticipated and certainly more than my mother had indicated in her own tales. It’s not so much that rape culture has been normalised here—rightly, most are still disgusted by such behaviour. There is a sad recognition, however, that although no rape case is ever ‘normal’, this sort of thing happens all the time.

The trauma I endured after my experience was difficult to deal with. I know I am not the only one who has had to suffer through haunting nightmares and grim flashbacks which have left me teary and unable to stop trembling. I was nervous to tell my mother, assuming that she would have been through much worse; her old-fashioned world sounded like a place where rape would have happened much more frequently than it does today. I assumed that the absence of rape or serious sexual assault cases among her anecdotes indicated an even heavier normalisation during her time at Oxford. The more I thought about it, the more amazed I was that so many women must have made light of what I was going through. But it didn’t take much trading of stories for us both to see the surprising and unnerving differences between our two experiences at this university.

“There was only one incident of alleged rape, and that was rumour about a girl we didn’t know well. There was lots of fumbling around and almost having sex—it was something embarrassing and of course everyone drank, but boys weren’t expecting anything. For the most part, there wasn’t pressure on girls to do anything they didn’t like,” she said.

Listening to her talk like this reminded me further of the advice she had given me when I was younger, and one snippet of conversation which I had particularly taken to heart: “If you don’t want to do something, you just have to be open about the fact that you’re not ready and that you’re nervous.  Boys will always be really understanding about that, no boy who likes you would ever get annoyed by that.” I find it extremely sad that this advice doesn’t seem appropriate in today’s Oxford environment.

In my mind, this is where the ominous difference lies regarding male attitudes in her generation  versus ours. The stories my mother recounts often feature well meaning but laddish or inappropriate men. Though her world, in which “it was completely standard for boys to make comments about legs, any comment about a part of one’s body,” sounds more overtly misogynistic than our more progressive cohort today, very serious sexual assault seems to be happening now more frequently than ever.

Perhaps my mother was just lucky and ignorant of sexual abuse going on under the radar all around her. “Possibly,” she admitted. “But I knew a lot of girls. We all talked about mistakes, accidents, whatever—but nothing of the sort of what you and your friends seem to have been very frequently exposed to.” Perhaps the classification for what counted as a ‘mistake’ and what counted as assault—i.e. the degree to which women blamed themselves when taken advantage of—has changed. Perhaps rape only seems more serious now because we acknowledge that rape happens more frequently with acquintances, than in dark alleyways. But is it really possible that so many women were able to deal with the emotional weight of serious assault, simply by pretending it didn’t happen?  As I’m sure anyone whose sexual boundaries have been seriously crossed would agree, bad sex, embarrasing sex, or even sex with someone you don’t like that much, is not at all of the same quality as being genuinely taken advantage of.

I suggested to my mother that she and her friends were just a particularly feisty bunch, differing from their peers in their wariness of men and ability to navigate tricky situations. Or perhaps they were more capable of dealing with the emotional consequences of assault than most. She shook her head. “All the girls at Oxford were strong, really. Just like all the girls at Oxford in your generation are strong. I don’t think that’s the issue.”

In spite of our world becoming more ‘progressive,’ I fear that it would not be far-fetched to argue that acknowledged cases of sexual assault are more frequent than ever. Alternatively, what is considered decent and right has changed. Perhaps a mixture of both. These days, all men claim to be feminists at surface level— women are taught that we have a right not to fear them. The trust women place in men not to rape us means that we are far less careful than women in my mother’s generation would have been. Increased availability of all types of porn also means that misogynistic views are allowed to stew under the surface of many men’s psyches. In response to my retelling of my own experience, my mother noted that “the vulgarity of sex and it’s accompanying violence was something that I don’t think was a theme in the same way. The predatory language, as much as anything, the whole sense of objectification and the idea of ‘doing things to you’, is very scary.”

Another key factor which I think has played a part in creating today’s unspoken culture of rape and sexual assault is, ironically, the rise of cancel culture. Rapists should, of course, face consequences; no one is taking issue with this. The permanence of our  online world, however, makes speaking up about an experience much more difficult. The gravity of the consequences which rapists and assaulters face means that the assaulted, too, tend to face backlash from society. At best, choosing to speak up leads to being viewed more warily by contemporaries; at worst, it results in ostracisation.

I worry that cancel culture has created an atmosphere in which people are more concerned with ‘not being cancelled’ than with striving to be better, more concerned with image than with good deeds. There is a general sense of people being concerned with how much  they can get away with. “She didn’t say no,” can lead very easily to “I thought she wanted it,” –  a classic act of gaslighting. It is difficult for women to speak up about rape at the best of times; blurring the lines of consent seem more than ever to be used as a driving force of a new type of unspoken rape culture.

What’s more, the ostracisation or punishment of any rapist will never be enough to undo the harm already done to the victim; there has to be some way of changing our actual culture in order to protect people from assault rather than solely attacking the wrongdoer after the act. If we are going to fight this, condemning rapists and supporting victims who speak up, though admirable, just isn’t enough. We need to encourage our society to strive to be generous-spirited, irrespective of its fear of cancellation rather than because of it.