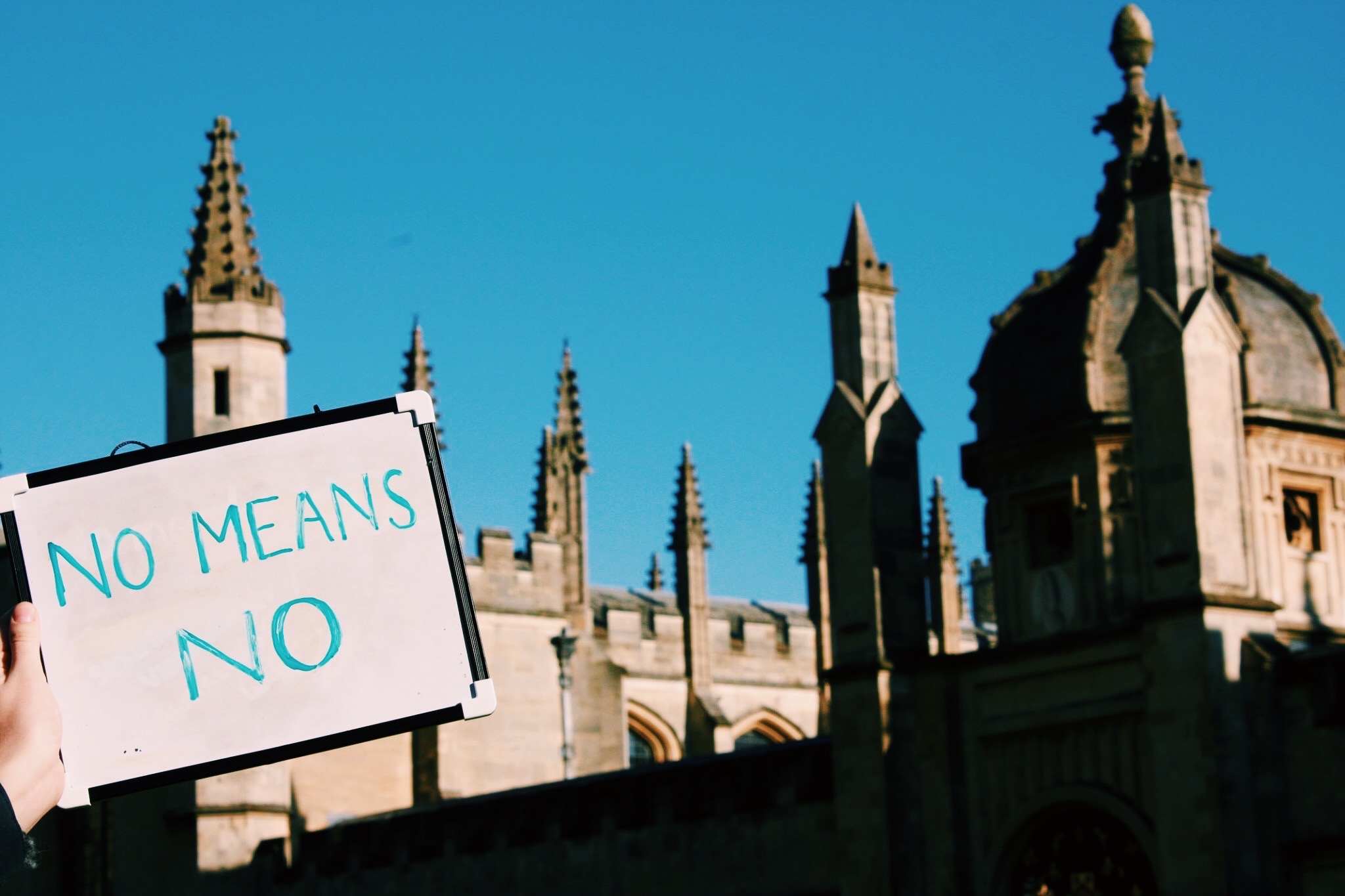 Students to Debate in Charity Fundraiser Against Sexual Assault

Image description: A sign with the text ‘NO MEANS NO’ written in block letters.

In response to ongoing efforts to combat sexual harassment, It Happens Here Oxford will be hosting a debating event as a charity fundraiser. The event, in collaboration with Oxford University Labour Club, Champagne and Socialism, Oxford University Conservative Association, and Oxford University Liberal Democrats aims to take place on 9th February, in fourth week of Hilary Term.

Advertised as ‘THW Raise Money for OSARCC’ (Oxfordshire Sexual Abuse and Rape Crisis Centre),the event’s Facebook page stated that it is meant as ‘a platform to raise money for sexual assault survivors, while giving an opportunity for students to debate on current political affairs’. The organisers have emphasised that the debate motions will not be about sexual violence due to its sensitive and heavy nature, and that the event is meant to be a safe space for all.

A recent article in the Oxford Mail has cited official statistics as being a ‘gross underestimate of the real situation’, with a total of only 26 official reports on sexual misconduct throughout 2017-2021 – a figure seen as ‘incredibly low’ in comparison to reality, where cases remain much more frequent and alarming.

The article revealed the many concerns in the university regarding under-reporting, the many flaws within Oxford’s collegiate and welfare systems, and how its continuous hang-ups with bureaucracy have allowed colleges and departments to become complacent and inefficient in dealing with reports of such cases.

Co-Chairs of It Happens Here, Timea Iliffe and Nicola Sharp, have both been cited in the article, arguing how “it comes down to a power dynamic”, and that “the collegiate system is one of the central barriers that we have continuously come up against.”

The article also found that victims are often concerned with potential backlash and alienation that may occur, especially when it comes to reporting sexual misconduct within staff-student relationships. When perpetrators happen to be students themselves, victims are also often burdened by concerns from others on how their assaulter’s degree outcome and future prospects will be affected.

“Regarding the Oxford Mail article, It Happens Here affirms our stance that under-reporting sexual misconduct is an endemic problem within the university,” says Kesaia Toganivalu, committee member of It Happens Here, who is involved with running the upcoming debate event.

“Building on from the comments given in the article, another obstacle in reporting is the use of Non-Disclosure Agreements (NDAs). It Happens Here asks that the Vice Chancellor join other institutions across the nation in pledging to stop their use in silencing survivors of sexual violence,” she continues.

With regards to the upcoming event, Kesaia emphasised that It Happens Here committee has pledged at the beginning of their tenure to focus on ending sexual violence within student clubs and societies, and that this event is meant to be “an extension of that pledge and a show of commitment by the other societies involved to tackle sexual violence.”

“There should be no room for sexual violence, not in your college, not in your faculty and not in these societies.” She adds, “It Happens Here will continue to work with [the other societies], and we are so happy they have agreed to raise money for OSARCC with us.”

Oxford University Labour Club has also shared with The Oxford Student that, “we are honoured to be participating in this important event to fundraise for the OSARCC. The issues with low recorded numbers is hardly unique to this university. Even from the low base of assaults that were reported to police, a mere 1.6% of reports lead to a conviction. We believe raising money for OSARCC is a particularly worthy cause, because the work they do not only helps survivors of assault recover, but also can be crucial evidence in prosecuting the perpetrators of these crimes. We hope students will join us, OUCA, OULD, and Champagne and Socialism next week to raise money and fight for a very serious cause.”

If victims of sexual assault seek to reach out for support, the Oxfordshire Sexual Abuse & Rape Crisis Centre can be contacted via 018 657 25311 or admin@osarcc.org.uk, and the 24-hour National Domestic Abuse Helpline can be reached at 0808 2000 247. You can also get in touch with It Happens Here via ithappenshere@oxfordsu.ox.ac.uk