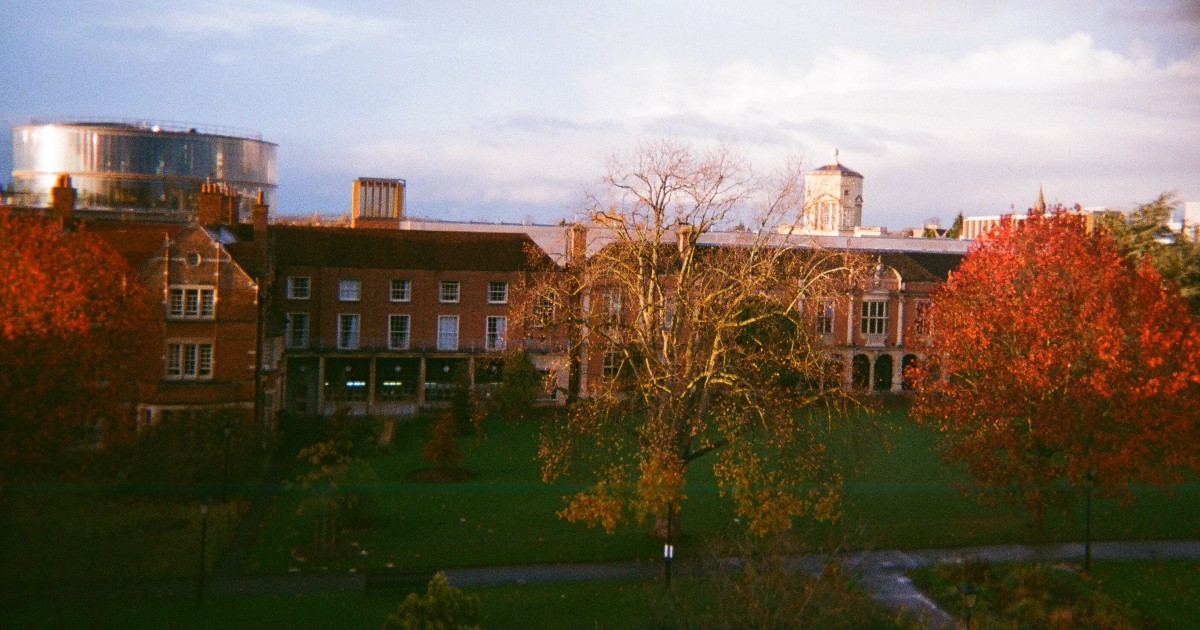 There’s No Such Thing As Personal Space In An Ethnic Household, But Now My University Room Feels Empty

Image description : Film camera image of the Somerville library and its surrounding greenery

From that moment you open UCAS track on a sunny (read: bucketing down with rain) mid-August morning (i.e., an anxiety-stricken evening when the government decides that your teachers should be able to determine your A-Level grades), all anyone seems to talk to you about is : “How are you feeling about moving to university?”

“Is it all living alone?”
“Cooking and washing for yourself?”
“How will you manage?!”

But for me, the worries of well-meaning aunties, somehow didn’t seem to stick. Going to University felt like a distant utopia I couldn’t wait to escape to. The normal two-month university anxiety and excitement had been bubbling over throughout my unexpected gap year, so that even the more unattractive parts of university life, felt like precious gems I couldn’t wait to own.

I watched all of my closest friends struggle through the hell of a locked-down first year and even then there was a part of me that felt alone and left behind. I simply couldn’t wait to be away. The place I was going looked like a far away, yet ever-nearing, paradise.

It was like Emily in Paris, but Paris was Oxford, and my name wasn’t Emily.

Whilst the year out and the growing sense of FOMO (fear of missing out) contributed in some part to my sense of longing, having grown up in as an only child in a Sri-Lankan household, there was also a part of me that had been yearning for the independence university would finally give me.

While often meant as a joke, and an off-hand comment, it is still an uncomfortable truth that, “There’s no such thing as personal space in an ethnic household.”

I have Asian friends who had to stop writing diaries because they knew they’d be read. People who’ve hidden items at other friends’ houses to avoid a family argument. Even in lockdown, there were moments when I’d be calling my friends and felt the need to whisper, suddenly overwhelmingly aware that the walls in my house are wafer-thin. And it wasn’t because it was a particularly incriminating conversation. It just suddenly felt like something that wasn’t meant to be shared that way. It felt like it should be personal.

After years of never having to justify yourself, it suddenly felt unnatural. Hence, I caught myself over-explaining on multiple occasions, especially during Fresher’s week, worrying I was starting to sound like a broken record, constantly citing “as an Asian…” or “growing up like I did…”

Especially as an only child, every swing of your mood becomes apparently noticeable, every action scrutinised in a way it seemed some of my other friends never were. I couldn’t wait to have a space of my own, where I woke myself up, made and ate the food I chose to, and didn’t need to justify any excursions to anyone but myself. I thought I’d considered the things that might be difficult – the things I may have taken for granted growing up. Yes it was sometimes deeply convenient to be awoken by my early-bird father. I also knew that I would eventually miss my mother’s spicy seasoned cooking (RIP hall curry, I know you’re trying your best…). But I’d come to terms with those things, I thought, I’d accept that I’d have to fend for myself in those ways.

Yet, what I didn’t expect was that there was another large part of my life so far I’d taken very much for granted.

Coming to university is a big step out of an often homogenous community, and into a mix of people with the kinds of backgrounds you couldn’t even start to imagine. It feels incredibly naïve to say, but at times, when you don’t leave your hometown too often, if at all, it’s easy to forget that even this fairly small country has such a wide variety of people from all walks of life.

When you grow up amongst people who’ve had similar life experiences to you, the same childhood, same shows, same culture – often, there’s very little you need to explain. I could start describing an experience and someone else would fill in the ending. For seven years I thought that that was friendship; Immediately knowing, immediately understanding. I didn’t have to explain to those people why I wanted to go to the earlier show, what food I was eating for lunch, or the unbearable weight of being a disappointment. They already knew, because they did those things, and they often felt it too.

But at university, you can’t assume these shared experiences. You have to explain, and you’re forced to share. I realise how there is also something deeply special about that too. After years of simply assuming that the people around me would understand, I was suddenly worried, in a way I never have been before. If I didn’t expand on every detail of ‘why’ and ‘how’, the meaning of whatever I was trying to describe would be lost, and that people would lose interest in what I was telling them, because nothing I said made any sense. After years of never having to justify yourself, it suddenly felt unnatural. Hence, I caught myself over-explaining on multiple occasions, especially during Fresher’s week, worrying I was starting to sound like a broken record, constantly citing “as an Asian…” or “growing up like I did…”

I didn’t think it was noticeable, and I doubt anyone but me would have made the slightest note of it. But noticing it made me I hate it. I felt isolated, and I felt alone in that fear. I yearned for the days when I didn’t feel like a nuisance for sharing how I felt, because I knew what I said would resonate.

However, I do think that explaining yourself and everything unique about you to someone who has no understanding of any of it is important. The fact that it took me 19 years to start to have to do anything of the sort is something I now find embarrassing, and yet fairly common. Whilst I’ve detailed my own specific South Asian experience, I believe the sudden realisation that not everyone is like the people you grew up with, is probably the most common university experience in existence, and probably even the most important lesson to take away from it all.

I think, that was the hardest thing about moving to university. Not the cooking, or the cleaning, or the waking up in the morning. It’s learning to grow and love, in a place and with people that look nothing at all like what you were familiar with.

It breeds an ability for empathy and tolerance, and hones communication skills (like when Emily learnt French). They all sound like buzz words and yet I feel like a much changed person for the people I’ve met over the last four months. It was a hard learning experience, especially because I had no idea it was coming. I ran headfirst into the university chapter of my life because I was fed-up of my life so far. I didn’t think it was important to bring with me the things safe, warm comforts that had thus made life what it was. The regular Zoom calls with friends, the snacks from Sambal Express (an excellent Sri-Lankan take-away chain, highly recommended), and even the sense of love for my degree were things I left to the wind in my rush to build my own space, my own life at university; Away from everything I’d known.

After Michaelmas I know that balance is important, between the old and the new. Now there are days I’ll sacrifice experiencing whatever spontaneous adventure my friends get up to, (read: ‘sitting in someone’s room for three hours procrastinating work and then leaving college to get Solomon’s and come back and continue) to catch up with friends with home. My stock of food in my room includes jars of snacks from home, which I’ve now also practised explaining in English so that I don’t have another experience where when faced with explaining what murukku is I said “like a wheat biscuit?” (it’s much more appetising than that sounds I promise). Even my nerd-ish tendencies seem to be intensifying, so much so that I had a much too long conversation about Mill’s higher and lower pleasures outside the SSL, and 99% sure we scared off the postgrads on the benches around us.

I realise now, I had been so ready to find my own space, that when I finally did, it felt empty.

And I think, that was the hardest thing about moving to university. Not the cooking, or the cleaning, or the waking up in the morning. It’s learning to grow and love, in a place and with people that look nothing at all like what you were familiar with.

Maybe it can initially come off as patronising when they send you off to university only to talk to you about such trivial things,  and make no mention at all of the deep sense of identity searching you’re bound to do when you get here.

Or maybe, they just assumed you already knew. People back home tend to do so.

Author’s note: I have not watched Emily in Paris. Any references to this show that actually make sense are purely coincidental.