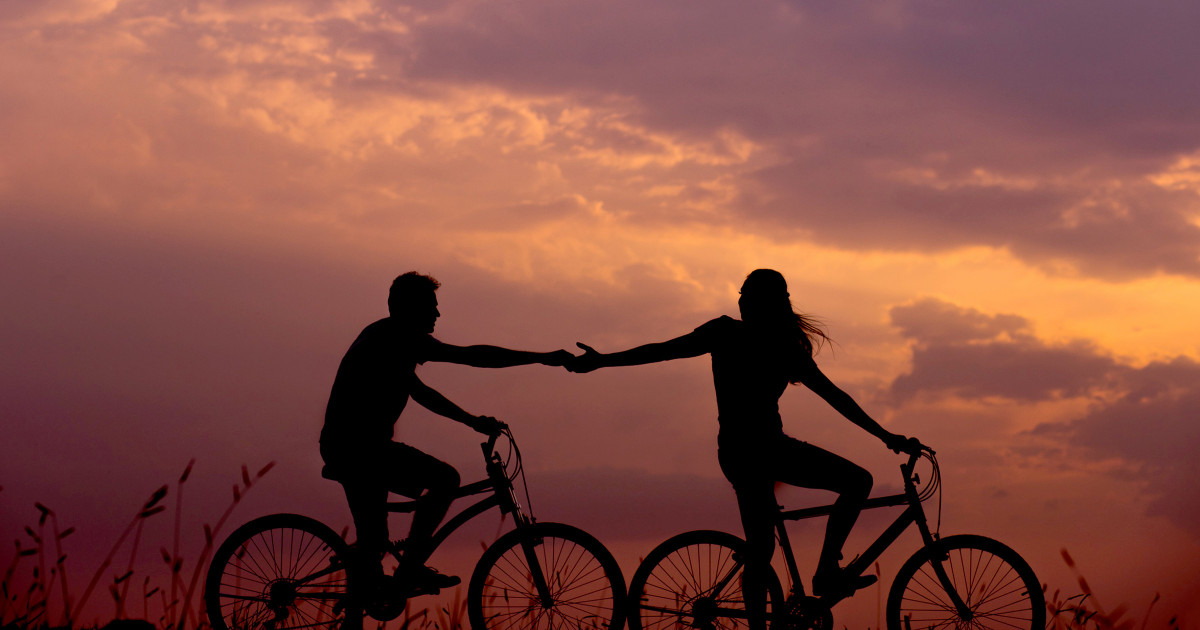 There’s Something About Romcoms

Image Description: A silhouetted couple riding bikes, a scene that one might easily see in a romcom.

There was a time several years ago when I considered romantic comedies my favourite movie genre. Something about the light-heartedness and cheesy jokes, as well as the almost guaranteed happy-ever-after, appealed to my 14-year-old self. Although nowadays I tend not to opt for romcoms as frequently as I did as a pre-teen, I cannot deny that they remain a guilty pleasure, and over the years I have watched an embarrassing number. These range from 90s and 00s staples like Meet the Parents to more recent romcoms like Just Go With It. With Valentine’s Day coming up imminently – sorry to remind you – stop checking Oxlove and instead indulge yourself in a romcom to escape into an idealised world of kissing in the rain and just making it to the airport before the plane takes off. After all, sometimes the optimism and giggles furnished by a good old romcom are much needed on a nauseatingly pink-and-red dyed February day.

I’ll start with a classic. It is rare to encounter someone, no matter how averse to romcoms they may be, who does not have a soft spot for Bridget Jones’ Diary (2001), considered a cult film in British pop culture. The dilemma Bridget Jones faces alongside trying to navigate her career and take control of her life is having to choose between two very handsome, very different suitors – although this may be considered more good fortune than an issue, especially when said suitors are played by Hugh Grant and Colin Firth. It is amusing, to say the least, to see Renée Zellweger’s chaotically charismatic Bridget both complement and clash with the infuriatingly blasé Daniel Cleaver (Grant), and the suave but mysterious Mark Darcy (Firth). There are moments of severe second-hand embarrassment aplenty; who can forget Bridget turning up to what she thinks will be a fancy dress party wearing the costume of a Playboy bunny, with the rest of the guests in ‘floral two-pieces’ and ‘V-necked sweaters’? The experience must be akin to showing up at a black-tie formal clad in a costume intended for the Anne-Sommers bop. Such comical scenes are nicely balanced by moments which are very tender, like when Mark Darcy tells Bridget, ‘I like you very much. Just as you are’.  Cliché? Perhaps, but this somehow does not detract from the swoon-factor of the statement.

The 2000s were certainly the decade for romcoms. A Cinderella Story (2004) serves up the perfect mix of teenage drama and the thrill of first love in a consistently entertaining modern rendition of, surprise, the Cinderella fairy-tale. Although the film’s premise is the pretty standard scenario of boy-meets-girl and is full of other romantic tripes, it is nonetheless compellingly wholesome to see Sam (Hilary Duff) and Austin (Chad Michael Murray) go from being anonymous online pen-pals to experiencing a real-life romance. Nowadays, this could be seen as an idealised version of the “modern romance” presented and popularised by dating apps like Tinder, with more and more people meeting potential romantic interests online before continuing the relationship in person. I cannot possibly go without mentioning Jennifer Coolidge, who, taking on the role of Sam’s evil stepmother Fiona, alone provides many of the film’s most iconic lines; the irony of the perfect seriousness with which she tells Sam, ‘you’re not very pretty, and you’re not very bright’ is stitch-inducing. But let’s not question how on earth Austin does not recognise Sam underneath her mask at that masquerade ball.

Although the buzz of romcoms seems to have subdued a little since the 2000s, recent years have seen a resurgence of the genre. Crazy Rich Asians (2018), based on Kevin Kwok’s 2013 novel of the same name, delivered a sumptuously extravagant rendition of a ‘meet the parents’ and Cinderella crossover. We follow Rachel Chu (Constance Wu), an economics professor at NYU, as she travels to Singapore with her boyfriend Nick Young (Henry Golding), where she discovers that Nick’s family is part of one of Asia’s wealthiest dynasties. Visually dazzling, the film escorts us to glamorous dinners and glitzy balls, while also allowing us to witness the heart-warmingly sincere relationship Rachel has with Nick. Likewise, her interactions with the dynamic and outgoing Peik Lin (Awkwafina, as effortlessly brilliant as ever) are addictive to watch. At the same time, Crazy Rich Asians does not fail to explore the theme of class differences and the detachment of the world of the ultra-rich, focusing in on Rachel’s status as an outsider amongst Nick’s relatives who often turn their noses up at her. Nick reassures her, however: ‘whatever happens, we’ll get through it together’.

For those of you who enjoy old Hollywood film, Roman Holiday (1953) is a bittersweet must-see. It stars Audrey Hepburn as Ann, a European princess. One night, fed up with the ennui of her restricted life, Ann takes off to explore the city of Rome, where she meets an American journalist, Joe Bradley (Gregory Peck). As also attested by such films as The Lizzie McGuire Movie (2003) half a century later, the choice of Rome for a romcom’s setting could not be more apt – who among us has not fantasised about a romantic getaway in this breathtaking cultural capital? Roman Holiday dizzyingly whisks us along with Ann and Joe to locations like the iconic Spanish Steps on the Piazza di Spagna and the magnificent Trevi Fountain. Director and producer William Wyler does an excellent job of using the allure of the scenery both to emphasise the glorious liberation of being free in an exciting city, but also to highlight the tension created by the knowledge that this experience is merely fleeting. Eventually, Ann will have to leave the magic of the cobblestone streets – and Joe – to return to her enclosed lifestyle. On the whole, the movie is an elegant treat.

I would suggest a rewatch of Love Actually (2003), but I fear I might get backlash for recommending a Christmas movie mid-February. Also, I have to give an honourable mention to Jennifer Aniston, who surely deserves some sort of award for the sheer number of romcoms she has appeared in over the years, albeit playing essentially the same character in different fonts. In all, cheesiness and outdated jokes aside, romcoms are a treasure that give us a little taste of fairy-tale romance by allowing us to live vicariously through the main characters as they inevitably get together by the movie’s end.