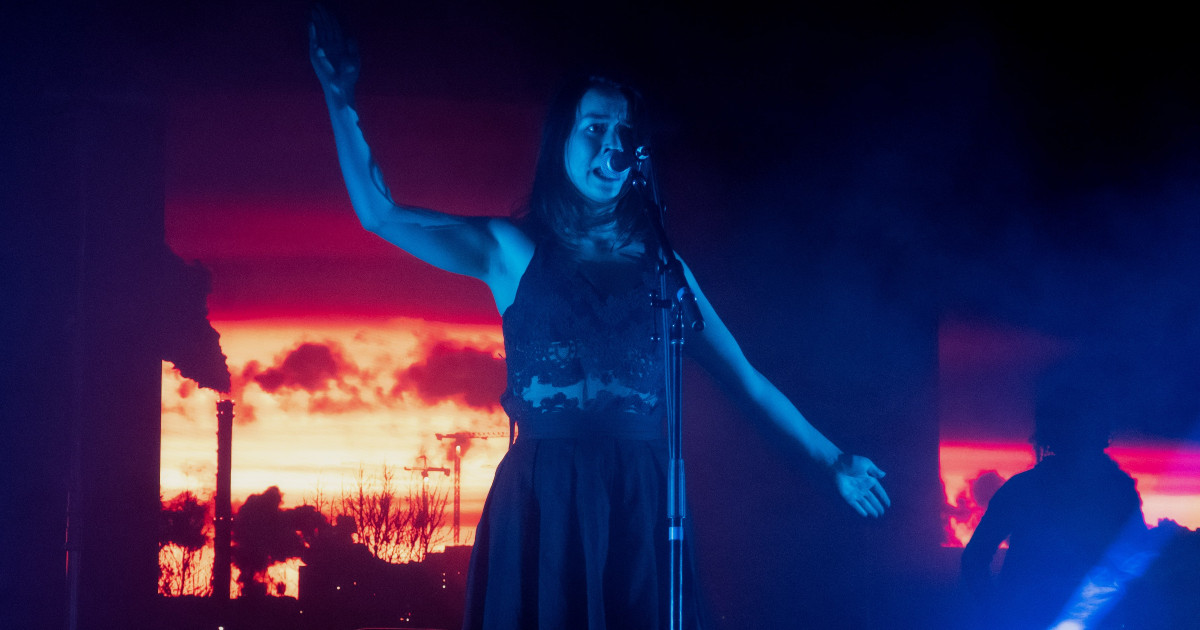 Image Description: An image of Mitski, singer-songwriter behind Laurel Hell.

Two weeks ago, singer-songwriter Mitski released her latest studio album Laurel Hell following an ‘indefinite hiatus’. In October 2021, millions of sad girls around the world (myself included) were overjoyed by the sudden reactivation of her social media to announce a new album and the release of its lead single “Working for the Knife”. Since then, she has been releasing one song from the album along with a video monthly before its full release on February 4th. This article will attempt to do justice to Mitski’s Laurel Hell.

According to Mitski, the title comes from a term in the Southern Appalachians where laurel bushes grow so thick that people have supposedly gotten stuck and died in them.

She explained the appeal of this dark imagery in an interview on Apple Music 1: ‘[L]aurel flowers are so pretty… I liked the notion of being stuck inside this explosion of flowers and perhaps even dying within one of them.’

The juxtaposition of pain and beauty is a common theme in Mitski’s music. Behind gorgeous lyrics, melodies, and visuals lay heart-breaking emotions. The album includes ‘love songs about real relationships’ but also songs which may be addressing Mitski’s own relationship with music and the industry. Although she had written most of the songs by 2018, she finished mixing them in 2021. This is the longest time she has spent on a record. The pandemic has also ended up affecting the form and meanings of many tracks on Laurel Hell.

In the first song “Valentine, Texas”, Mitski creates a powerful image in the opening line: ‘Let’s step carefully into the dark.’ As we enter a new stage of her life and career, Mitski returns to the public world. This is described as ‘dark’ – she does not know where life might take her, and whether making music again is the right decision. The song resonates with its listeners too: after a period of so much uncertainty, the world may never be the same again, and we’ll never know what to expect from now on.

Next is “Working for the Knife”, in which Mitski reflects on being a child with big dreams and realising that the real world is not so idealistic. She compares capitalism and society’s standards to a knife, criticising the fact that we are often forced to leave behind our hopes, interests, and humanity in order to work for profit. Here Mitski may be referring to her own career, indicating that there are things she would have liked to create but couldn’t in order to appeal to her audience and sell music. This cynical but very realistic message is presented in a loosely structured song accompanied by bold synth notes and an expressive music video.

The album’s mood appears to pick up with the sensual and suggestive “Stay Soft”, full of double entendres. Initially written as a rock song, Mitski said that the dark, sexual lyrics felt too dramatic, so opted for an uplifting dance beat to sing about an unhealthy relationship between people trying to make sense of their pain and trauma.

In “Everyone”, Mitski continues the theme of her musical career. ‘Everyone said, “Don’t go that way”/ So, of course, to that, I said/ “I think I’ll go that way” – here she sings about lacking support at the start of her career, which only fuelled her defiance. Later on, she realised how difficult it is to survive in the world of music: ‘I didn’t know what it would take.’ Again, she uses ‘the dark’ as a metaphor for the music industry and the uncertainty of her career. Before the release of this album, it was unsure whether she would ever make music again, and with this song she reflects on the price of fame.

“Heat Lightning” is a ballad inspired by The Velvet Underground in which a dark, sultry instrumental accompanies lyrics about insomnia and its implications. Mitski feels helpless in the face of anxiety, so she lets her thoughts take over: ‘And there’s nothing I can do, not much I can change/ So I give it up to you, I hope that’s okay.’ The song is riddled with rich imagery about beautiful heat lightning, which is actually a metaphor for her pain, comparing anxiety to a storm which she cannot prevent from taking over.

Next is “The Only Heartbreaker”, another synth-heavy, 80s-inspired dance track about feeling like the bad one in a relationship and wishing that the other person could mess up just once in order to make Mitski feel better. She feels as if she is not good enough for her partner, but at the same time she is the only one trying to make their relationship work: ‘I’ll be the water main that’s burst and flooding/ You’ll be by the window, only watching.’ In the music video, Mitski dances as she watches the world burn around her, presenting the idea of self-sabotage and being a bystander in your own life.

“Love Me More” is one of my favourite tracks on the album, in terms of both instrumentals and lyrics. Lines such as ‘If I keep myself at home/ I won’t make the same mistake’ as well as the overall theme of isolation and living a boring, monotonous life, became even more relevant in the context of the pandemic, which is why Mitski chose to leave them in. This song could also be about the constant need for validation from someone else – because Mitski is unable to love herself, she needs external affection.

The final four songs on the album send the listener on an emotional rollercoaster. “There’s Nothing Left for You” and “I Guess” are classic Mitski-esque sad songs which remind me of her 2013 album Retired from Sad, New Career in Business. The former is a heart-wrenching ballad about feeling like she has nothing left to give – possibly in a relationship, or to the music industry. The latter could be about grieving a failed relationship and introspection after a breakup, contemplating how to move on.

“Should’ve Been Me” and “That’s Our Lamp” sound much happier, but in typical Mitski fashion, present sad stories. “Should’ve Been Me” features a funky bass line over which she sings about a relationship in which she was emotionally unavailable: ‘I haven’t given you what you need/ You wanted me, but couldn’t reach me’, so her partner tried to find another to replace her. I can’t help but connect this song to “Washing Machine Heart” from Mitski’s previous album, in which the partner sees her as somebody else to fulfil their emotional needs, whilst she pretends not to notice. It seems to me that both songs could be different perspectives from the same love triangle.

The album concludes with “That’s Our Lamp”, a bright tune about a relationship that has fizzled out. Mitski reminisces about the happy times whilst grieving love that has now been lost. It is a somewhat unusual way to end the album, but does sound like a goodbye. ‘We may be ending/ I’m standing in the dark’ makes one final reference to the theme of darkness, as Mitski expresses the loneliness she now feels, but potentially also the uncertainty of her career.

Mitski is an extremely private person, so we rarely know who or what exactly might have moved her to write such sad lyrics. This means that her music can be very ambiguous. However, songs with multiple or unknown messages make them even more personal to the listener, who can create their own meaning.

I too listen to some songs and take them so personally that I feel as if Mitski herself has looked into my mind and created the perfect song to encompass my emotions. That is the beauty of her music, and while she reminds her fans constantly that we do no not truly know her, there is something really comforting about feeling deeply understood.

What will Mitski do next? Currently preparing to embark on a world tour, many claim that the artist has ‘made it’ in music, having gained fiercely devoted fans who appreciate and understand her music. In Laurel Hell, Mitski expresses mixed feelings about her career and what the future may hold.