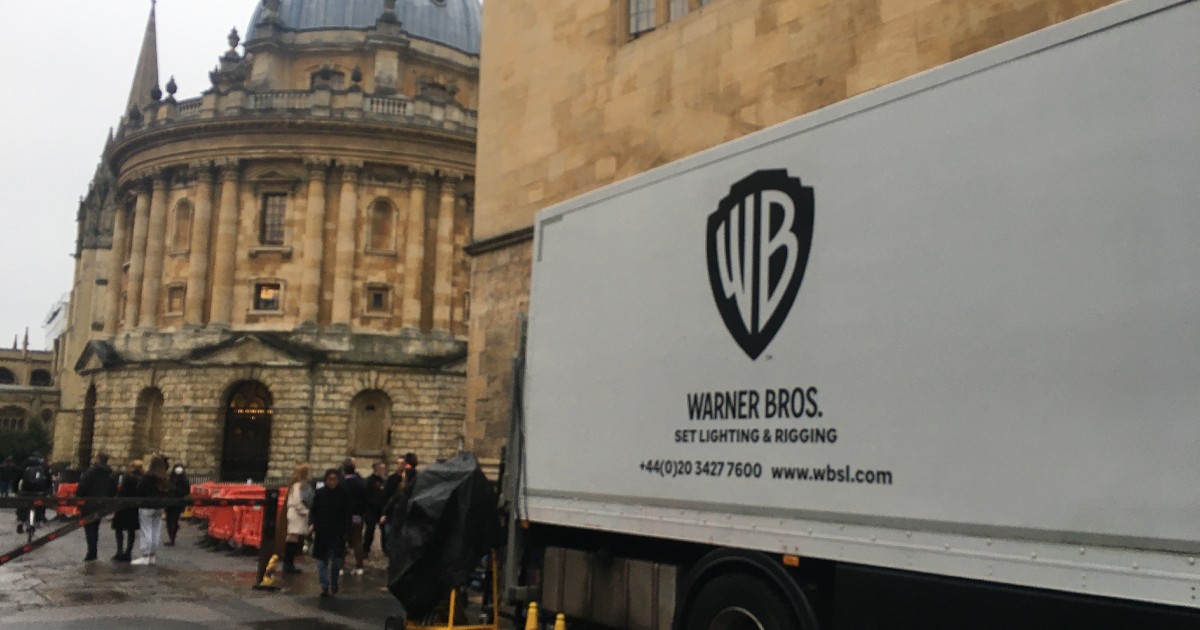 Image description: Warner Bros Studios lorry with the Radcliffe Camera in the background

Filming has resumed for the new ‘Wonka’ starring Timothee Chalamet in central Oxford.  Warner Bros Studios’ newest film, based on Roald Dahl’s fictional character Willy Wonka were last in Oxford in mid December where technicians were seen working on the Radcliffe Camera, with a large crane and scaffolding.

The Bodleian Libraries issued a notice last week stating that filming would commence from the 14th of February to the 20th and that there would be some minor disruption including the blocking of some entrances and exits.

As of the 14th of February the Bodleian Quad was only open to students, and those wishing to enter had to show their Bod card to members of security at each of the entrances.

Also seen in the Bodleian Quadrangle on the 15th of February were signs saying “Pavlov’s Museum” as well as two green, old fashioned and apparently German phone boxes.

Catte Street was also lined with period pieces, most notably a series of period cars, accompanied by a large Warner Bros Studio’s set, lighting, and rigging truck outside Hertford College.

Members of security when asked about the film declined to positively identify the production as the ‘Wonka’ film but assured members of the public that this was part of ongoing filming which has been confirmed by the attendance of Timothee Chalamet on set.

Catte Street was intermittently closed throughout the 16th of February as scenes were filmed with Timothee Chalamet, causing large crowds and queues with some members of the public stating they found the delays “inconvenient” and were pleased to know the filming was only set top last for approximately 5 days.

Chalamet was spotted in Oxford including filming cycling scenes in snow and further scenes in and around the Bodleian.

‘Wonka’, directed by Paul King, whose other notable works including the live-action Paddington, and written by Horrible Histories and Ghosts star Simon Farnaby, is expected to release in early 2023. Starring Timothee Chalamet in the titular role, as well as Rowan Atkinson and Olivia Colman, the film aims to explore a young Willy Wonka and his adventures before opening the famous chocolate factory.