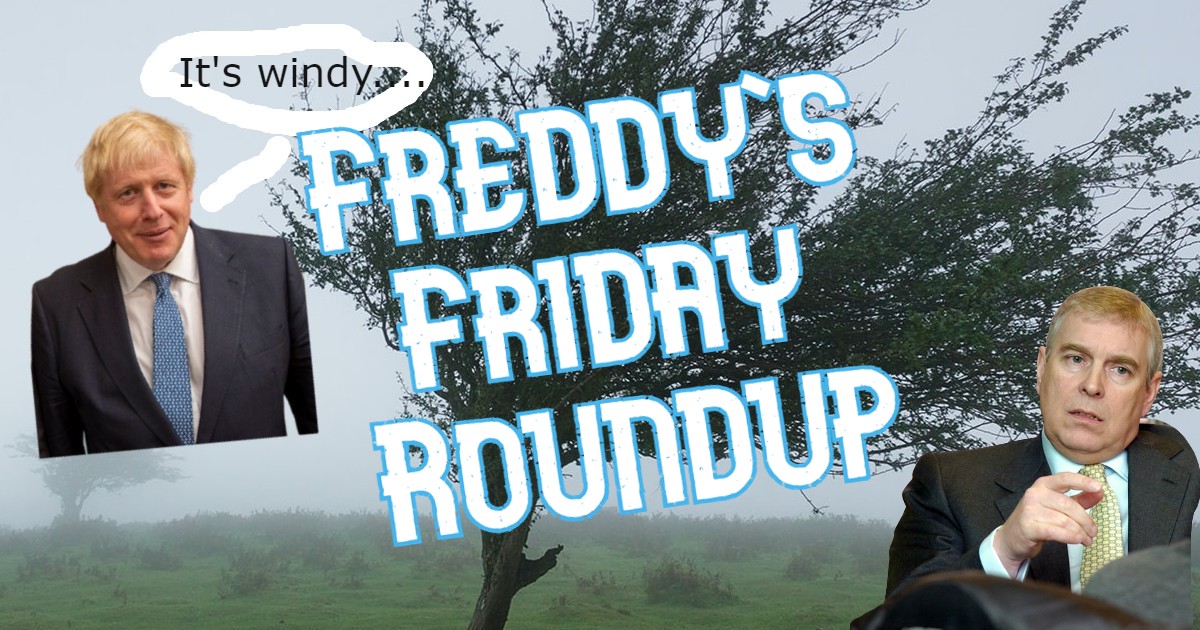 Image description: a tree battered by the wind overlaid with images of Boris Johnson saying ‘it’s windy’, Prince Andrew looking depressed, and the words ‘Freddy’s Friday Roundup’ in white text because why not.

The nation waits with bated breath. Storm Eunice is given a Red Wind Warning as it gathers momentum and ravages the South West of England and Wales, so soon after the destruction wrought by her predecessor Storm Dudley.

One could be forgiven for thinking that the eponymous storm spirits had gathered at a parish council meeting in some such remote British village as Chipping Norton, Nether Wallop, or Upton Snodsbury, along with their friends Storm Frances, Storm Gerald, and Storm Hettie to plot how they might wreak havoc across the country. Their plan is to make themselves famous through their exploits and restore silly-sounding middle class names to the mainstream.

In fact, Chief storm namer at the Met Office, Jonty Herringbone-Smythe, one of Dudley and Eunice’s cronies, declined to comment after numerous Ofcom complaints demanding a greater diversity of storm names. Suggestions of ‘Storm Fatima’ and ‘Storm Giovanni’ were unfortunately deemed unsuitable and Herringbone-Smythe was sacked for dearth of wokery.

The government assembled an emergency Cobra meeting to ascertain why Britain was getting battered as much on its home territory by Dudley and Eunice as it is on foreign shores at the Winter Olympics- Team GB is yet to tally on the medal board and in yesterday’s two man bobsleigh race, failed to complete the circuit, and were consequently beaten by smaller nations Jamaica and Trinidad and Tobago.

So, the national news does not look promising. It’s messy like a Prince Andrew court-case, but let’s hope as a country, we will not ‘settle’- with another Red Wind blowing in from the East and bringing with it the threat of a Russian invasion of Ukraine, Prime Minister Joris Bohnson agreed to step up economic sanctions against Russia, mainly to protect his reputation and resist allegations of appeasement.

In a burst of patriotism, The Prime Minister was said to have reached this conclusion half way through his second bottle of British ‘Brexit’ champagne at the Bacchic climax of a wine and cheese night, which Sue Gray attended. It featured ‘Brexit’ cheeses produced exclusively in the parochial British villages of Chipping Norton, Nether Wallop, and Upton Snodsbury.

Now everybody told him about this party, and ministers and Downing Street secretaries alike could revel in the peace of their’s party’s legality, away from the nitpicking leer of the meddling media and the prying public.

With the hounding of Bojo in newspapers somehow rapidly becoming chip paper as he dodges the bullets once again, the media did however have much to say about London Mayor Sadiq Khan’s ultimatum to outgoing Police Chief Cressida Dick in the wake of her mismanagement of rogue officers in the Met. On what has been framed as her sacking, right wing tabloid newspaper The Fun wrote ‘Khan gets Dick out’.

It goes without saying that accustomed Telegraph readers residing in Chipping Norton, Nether Wallop, and Upton Snodsbury were frankly sickened to see such a ghastly and unbefitting headline on the shelves of their local Londis.

In other offbeat news, a chicken crossed a road, an eagle ate a toad in a jackal’s abode and a giant strode to the isle of Rhodes.