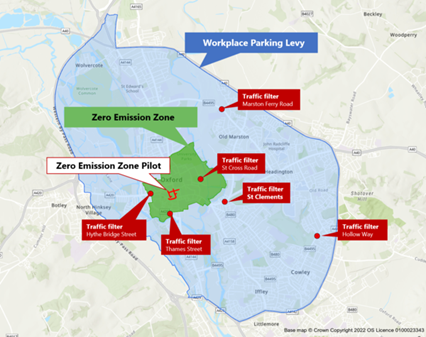 Oxford City Council, in conjunction with the Oxfordshire County Council, has announced plans to create a ‘sustainable and reliable’ zero carbon transport system in the city, introducing a citywide workplace parking levy, traffic filters, an expansion of the zero-emission zone (ZEZ) beyond the currently designated pilot area and improved public transport and cycle routes.

The plans are scheduled to be implemented between 2023 and 2023, with consultation on these new proposals taking place in late summer 2022 when the City Council will gather suggestions and feedback from businesses, hospitals, schools and transport providers. With the addition of the Zero Carbon Network, the city aims to “chang[e] the way people travel in and around Oxford” and “help reduce air pollution [and] create healthy communities.”

Councillor Tom Hayes, Deputy Leader and Cabinet Member for Green Transport and Zero Carbon Oxford at the City Council, highlighted the urgency of the proposals, declaring that “Our air must be cleaner to protect our health. Our energy must be cleaner to protect our futures.” Noting the need to strike a balance between “tackling air pollution and [the] climate crisis” and making citizens can “move swiftly and simply from A to B”, the Councillor argued that the new proposals will be a fix to this problem and allow the public to “enjoy the best possible health and transportation, and to look to the future with hope.”

Specifically, new policies under the proposal include extending the Workplace Parking Levy (WPL) to cover employers across the city, with the funds raised by the levy going to the improvement of public transportation. The city will also set up six traffic filters in city centre to reduce traffic congestion and prioritise movement by cyclists and pedestrians, which will be complemented by the decision to extend the ZEZ to cover the entire city centre, encompassing the University as seen in the map above.

Currently, transport emissions account for 17% of greenhouse gas emissions in Oxford, according to data from the City Council. For the city to create a full zero carbon transport network by 2040, Oxford will need to reduce 30% vehicular transport use and substantially increase cycling, walking, home-working and car-sharing.

Commenting on the announcement, Councillor Duncan Enright from Oxfordshire County Council, said: “The climate emergency and inequalities across the county and city mean Oxford needs a more sustainable and reliable transport system for everyone.”

The Councillor also praised Oxford’s status as a leader in environmental awareness and innovation, adding “we want to make walking, cycling and using public transport the first choice for people. The new plans will not only help us move towards a progressive transport network in the city, but they will also improve the quality of all our lives.”

The funding for these new initiatives will come from various sources, with the County Council actively applying for grants from the government through a zero emissions transport cities bid, according to its press release. Funding applications to the Bus Service Improvement Plan (BSIP) and the government’s Zero Emission Bus Regional Areas (ZEBRA)  have already been submitted in an effort to add more than 150 new electric buses to Oxford’s transport network. The applications are still pending approval.

While the two councils have recognized that certain exemptions to the schemes will be allowed in specific circumstances, more details on its application and the implementation of the schemes in general are still in development. The councils also expect to host a series of webinars for the public to explain the proposals at a later date.