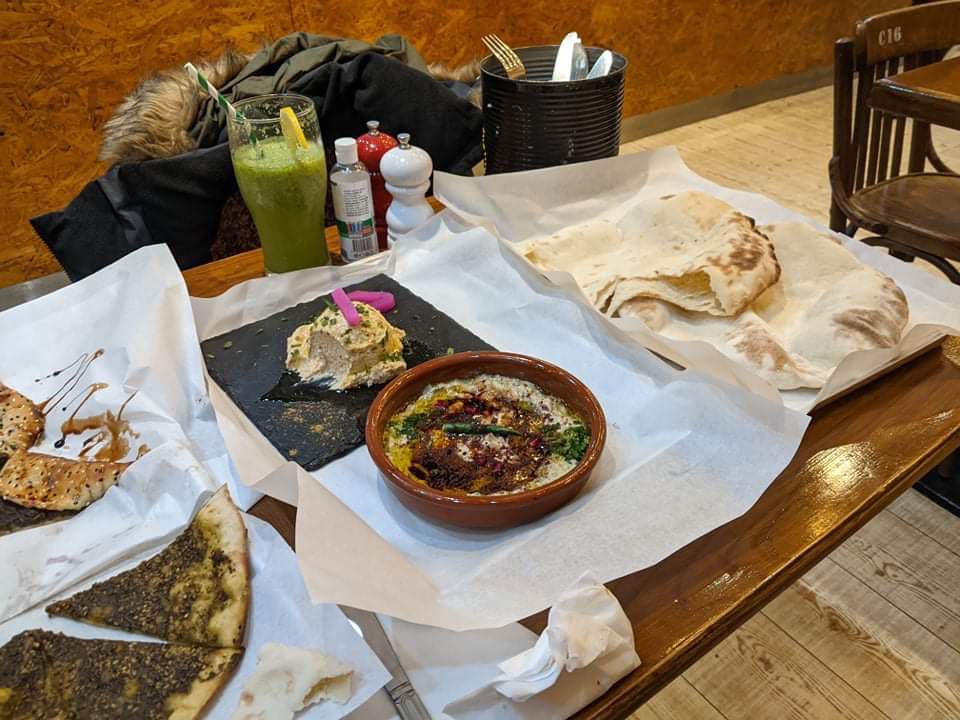 Before we begin, I must make a confession. I adore Palestinian food. In fact, Palestinian food is my speciality. I was taught to cook by my Palestinian Tata (Arabic for Grandmother) and I adore the culture, cuisine and attitude to eating that runs through Palestine. Cut me and I bleed tahini. So, a visit to Za’atar Bake, a Palestinian restaurant on Cowley Road, was basically a rite of passage. Scouting out middle Eastern restaurants is vital. I need to know where I can get my next Fattoush fix.

Za’atar Bake offers a plethora of choices for the discerning inquirer. Entering the restaurant, you are met with Palestine: baklava and various syrup-soaked treats are proudly displayed, Arabic music plays and punters recline on Bedouin-style cushions. My guest and I were ushered to a table where we had front-row seats to watch the magic of the enormous stone kiln at work. In and out of the oven went plate-sized pita, majestic manakeesh (flatbreads) and main courses, each encased in traditional clay pots. It was a joy to see the chefs at work, deftly maneuvering the contents of the oven with a gigantic wooden pole. Now, just to determine what I wanted out of that oven.

I lied. I already knew exactly what I wanted. Although the main courses were infinitely tempting, I yearned for mezze: the quintessential Palestinian meal. Whether for breakfast, lunch or dinner, mezze is always the answer. We ordered falafel, za’atar and spinach manakeesh, hummus, baba ganoush (burnt aubergine dip) and the salad of the day, which much to my delight, turned out to be Fattoush (bread salad). To accompany this feast, we each tried the homemade mint lemonade. I was slightly icy, like a raita, but was wonderfully refreshing, and provided a vital counterpoint to the richness of the meal.

Scouting out middle Eastern restaurants is vital.
I need to know where I can get my next Fattoush fix.

Unbeknownst to us, both the hummus and baba ganoush also came with enormous pita. So, we dramatically over-ordered. But, being left with extra is never a problem for a student, so returning home with a bag of pita under my arm rendered me especially smug. The mezze itself was astounding. First came the manakeesh (flatbreads). Each dish came as it was ready, straight out of the oven opposite and onto our table. I watched as the breads went in, and as they emerged, glowing with heat and awash with olive oil. The za’atar manakeesh was thin, perfectly done, with just enough bite to be satisfying, but not too much to border on pizza territory. The spinach manakeesh resembled the traditional spinach parcels my Tata delivers to me as Red Cross Aid in fifth week. At Za’atar Bake it was bespeckled with sesame and nigella seeds, and drizzled with sour pomegranate molasses. The spinach itself was tart and piping hot, yet balanced by the mellow pastry. It is beside the point to state that it did not last long.

Next came the hummus and baba ganoush, causing a pita-related epiphany. Nevertheless, the dips were fascinating. The hummus was not what I expected. It was presented as a scoop, adorned with cumin, fresh parsley and of course, pickled radishes. It was a hearty hummus, not quite the smooth, silky spread I had envisioned. As my Tata always critiques my hummus, it could have done with more lemon and garlic. But my ability to make my own hummus at Oxford is zero, so beggars cannot be choosers. Hummus misgivings were much made up for by the baba ganoush, of which we ordered the spicy version. Served in a brown clay pot, this dish embodied Palestinian cooking. Basking in olive oil and sumac, shoveled with pita, the slight heat of the chili intertwined with the creamy burnt aubergine, it was a revelation. I cleaned up the dish very neatly with fingers and pita. The epitome of mezze eating.

The spinach manakeesh resembled the traditional spinach parcels my Tata delivers to me as Red Cross Aid in fifth week. At Za’atar Bake it was bespeckled with sesame and nigella seeds, and drizzled with sour pomegranate molasses.

Needless to say that the Fattoush and falafel were of similarly high quality. The lettuce of the Fattoush was brilliantly crisp: none of this wilting, lacklustre nonsense. The tomatoes were sweet and mellow, in contrast to the acidity of the sumac and molasses. The eponymous bread was crunchy and not overly oily: a common shortcoming of Fattoush. A brilliantly executed dish. The falafel were hot and fresh. One could smell the parsley and chickpeas wafting from the bowl, and the accompanying lettuce, pickles and tahini completed the dish.

In all, Za’atar Bake was a resounding success. It is a slight trek out of the centre of town, but one you will be copiously rewarded for. It would be a brilliant introduction to Palestinian food for the complete beginner, and aspires to reach the lofty heights of the learned critic.

Returning home with pita in tow, how could I not love this place? After all, cut me: Do I not bleed tahini?\