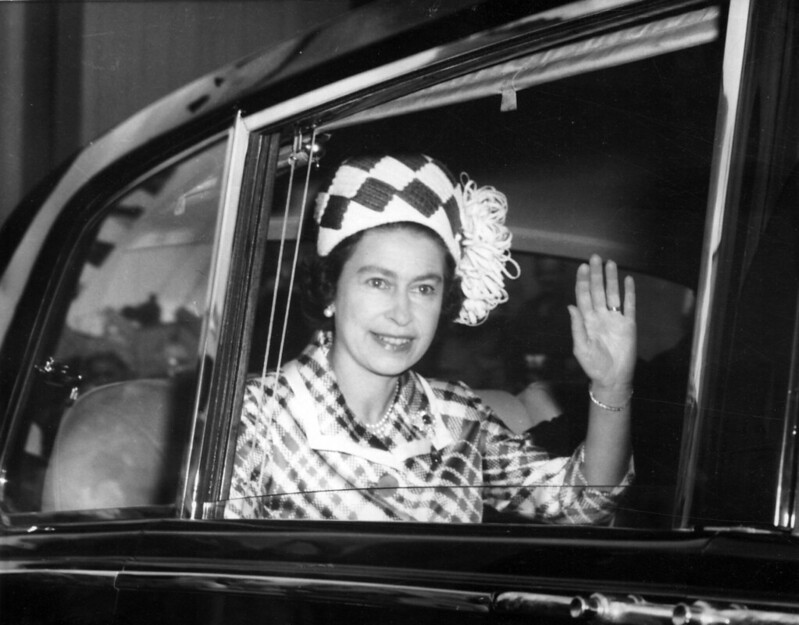 Long to Reign Over Us

Image description: Queen Elizabeth II waving from a car window on a trip in Queensland, Australia.

When Queen Elizabeth II first ascended to the throne on 6 February 1952, Winston Churchill was the Prime Minister, the foreign-born population of the UK constituted just 4.2% of the entire population and the majority of the British Empire was still intact, besides India which had gained its independence just 5 years earlier.

Signs could be seen in windows with rooms to let, listing requirements of ‘No dogs, no Blacks, no Irish’.

Rationing for bread and many other foodstuffs was still in place after the Second World War, owing to the economic frailties which afflicted Britain during Attlee’s premiership. Harold Macmillan’s grand housing plan was underway and would build 300,000 new homes in place of inner-city slums.

Discrimination towards women, ethnic minorities including the Irish was seen as part and parcel of the fabric of society, and signs could be seen in windows with rooms to let, listing requirements of “No dogs, no Blacks, no Irish”.

The changes which were to occur during her reign were unsurprisingly incredibly unprecedented at that time.

The death penalty was still a punishment used by the courts, although admittedly it was rarely issued for any but the most serious and heinous crimes and just a year into her reign, the Derek Bentley case would shock Elizabeth’s country so much that it would be one of the last cases of capital punishment used.

Homosexuality, between men at least, was strictly illegal and the moral shock surrounding its criminality would not be horrifically exposed by the Jeremy Thorpe case for another 20 years. Abortion was a crime, and thousands of women and girls relied on backstreet abortion clinics in order to carry out their abortions. Schooling in this country was still governed by the 1944 education act, whereby secondary school education was strictly only available for the brightest kids who passed their 11+ exams.

The changes which were to occur during her reign were unsurprisingly incredibly unprecedented at that time, but then again so was the fact that the Queen would reign for 70 years.

Indeed, our current Government is taking steps to become tougher on small-boat crossings in the English channels and to increase their own power to strip non-British-born people of their citizenship, simply to save their own skins.

While there is a tendency among leftists to view history as a series of progressions towards a more tolerant and permissive society, there have been many forks in the road between 1952 and 2022. Large-scale race riots would afflict Britain throughout this time, such as the infamous Notting Hill riots, and racism certainly hasn’t become a thing of the past even today. 54 years since Enoch Powell’s Rivers of Blood speech, our society is still one where immigration is a political football that both of the largest parties like to kick about through the pacing of the game.

Indeed, our current Government is taking steps to become tougher on small-boat crossings in the English channels and to increase their own power to strip non-British-born people of their citizenship, simply to save their own skins. Similarly, the path towards tolerance towards sexuality has been rocky in Elizabeth’s Britain. Thatcher’s Section 28, for instance, enacted in 1988 presented a large step backwards in teaching tolerance in children about homosexuality, by recalling funding from any schools that actively sought to teach homosexuality as part of their sex education. It would take until 1967 for homosexuality between men to become legal, until 2001 for the age of consent to be equalised, until 2004 for same-sex couples to form civil partnerships and until 2014, just 8 years ago, for same-sex couples to earn the right to marry.

Now we live in a country that is mostly ashamed and guilty of our Empire.

Marriage itself provides an interesting case study for seeing the way in which society has become more permissive and tolerant. The Divorce Reform Act 1969 allowed couples to divorce if they had been separated for more than 2 years, and removed the requirement for couples to admit or prove fault in the relationship. Even despite this, the Church would fail to keep up with this greater permissiveness towards divorce. Many people would be rejected marriages by their local Churches even until quite recently, as my parents in 1990 were denied a Church marriage and were forced into marrying at a registry office due to the fact that my mother had already been married and divorced.

Most importantly of all these changes though, is the changes in our attitudes towards the Empire during the Queen’s tenure. As we have seen the Empire was still mostly intact in 1952 and the years of decolonisation that followed were more pragmatism than anti-Imperialism. Yet now we live in a country that is mostly ashamed and guilty of our Empire, with a 2019 poll suggesting that only 32% of the public suggesting that they were more proud than ashamed of our Empire, a figure which would doubtlessly be lower now.

Gladly, we are a country that no longer just looks at statues and believes that narrative that they feed us of these people’s greatness. Instead, we look at a statue of Churchill and see him in all his constituent parts; War hero, great orator yes – but also just an imperialist and a racist.