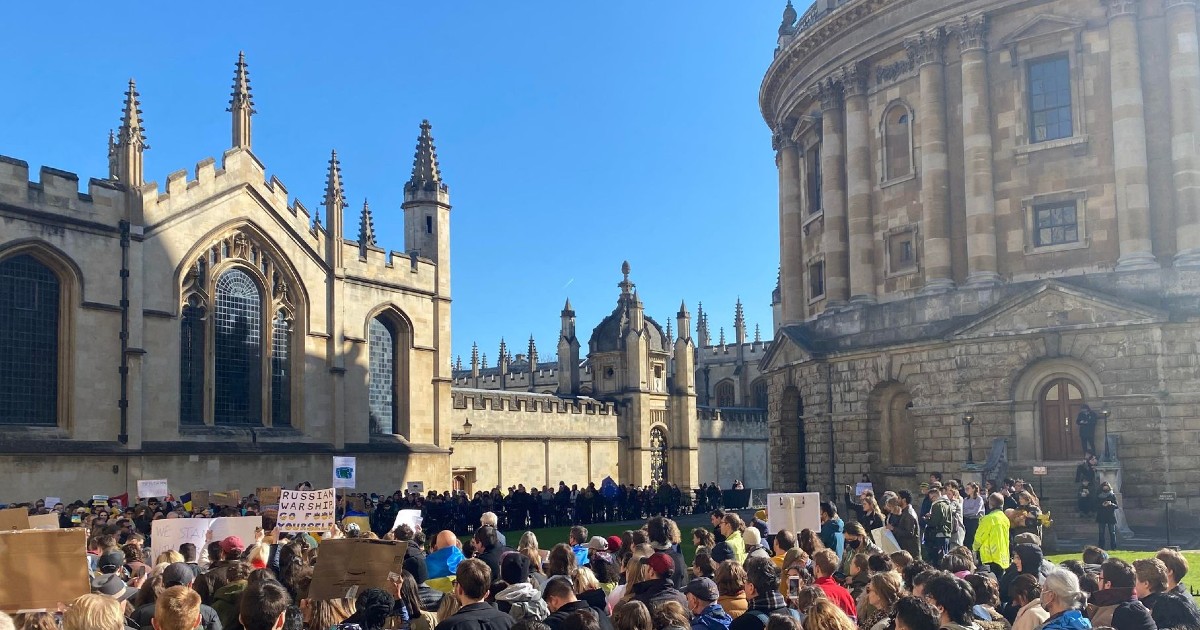 Image Description: Oxford Ukraine Protest in front of the RadCam. Thousands of protesters gather with flags and signs.

Thousands of students, staff, and Oxford residents gathered Sunday afternoon at the Radcliffe Camera to protest the Russian invasion of Ukraine and express solidarity for the Ukrainian people, as well as Ukrainian students. The event, organized by the Oxford University Ukrainian Society, saw numerous Ukrainian speakers detail how they and their families’ lives have been affected by the invasion, and call upon the Oxford community to act. Protesters held signs featuring slogans such as the defiant “Russian Warship, go f**k yourself,” and chanted “F*ck Putin, stop the war,” and “Slava Ukraini.” 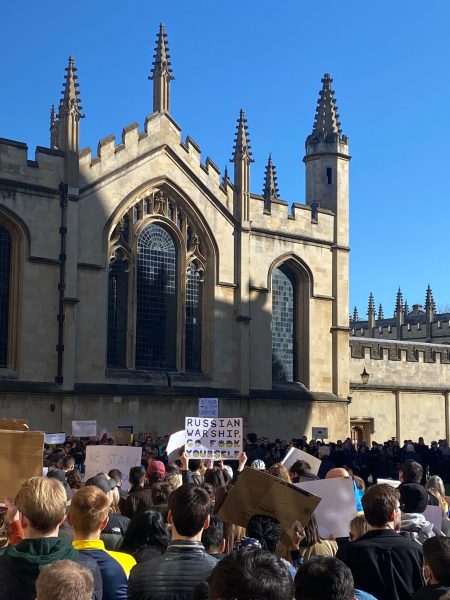 There was little talk of refugee policies as speakers chose to focus on efforts to resist and repel the Russian invasion, from sharing stories and lauding the determination of the Ukrainian people to disseminating ways for people to help. Protesters called for donations to relevant efforts, attend rallies, and write to Mps (detailed advice can be found on the Ukrainian Society’s Facebook page). Student Sasha Mills urged all JCR/MCR committees to approve funding and resources to support Ukraine, pass statements condemning Russia’s invasion, and fly the Ukrainian flag.

Other speakers at the protest included representatives form Oxford University’s Polish, Syria, Czech and Slovak Society, Georgian Society, as well as individuals from other countries affected by war, such as Afghanistan. Many protesters criticized NATO members for failing to do enough to prevent the invasion, while others warned that sanctions alone would be insufficient, arguing that more “decisive action” must be taken.

One speaker, whose family remains in Kyiv and whose father had joined the civilian resistance, was audibly emotional as he recalled their resolve in a recent conversation. Another speaker recounted his brother’s experience waking up to a missile striking nearby.

The tone of the protest was solemn but fiercely determined, as one student summarized in an address directly to Ukrainians: “Thank you for your bravery. It has been inspiring for everyone in the world.”

The Ukrainian Society is holding further events in the coming weeks, including a concert at Common Ground tonight at 17:00.