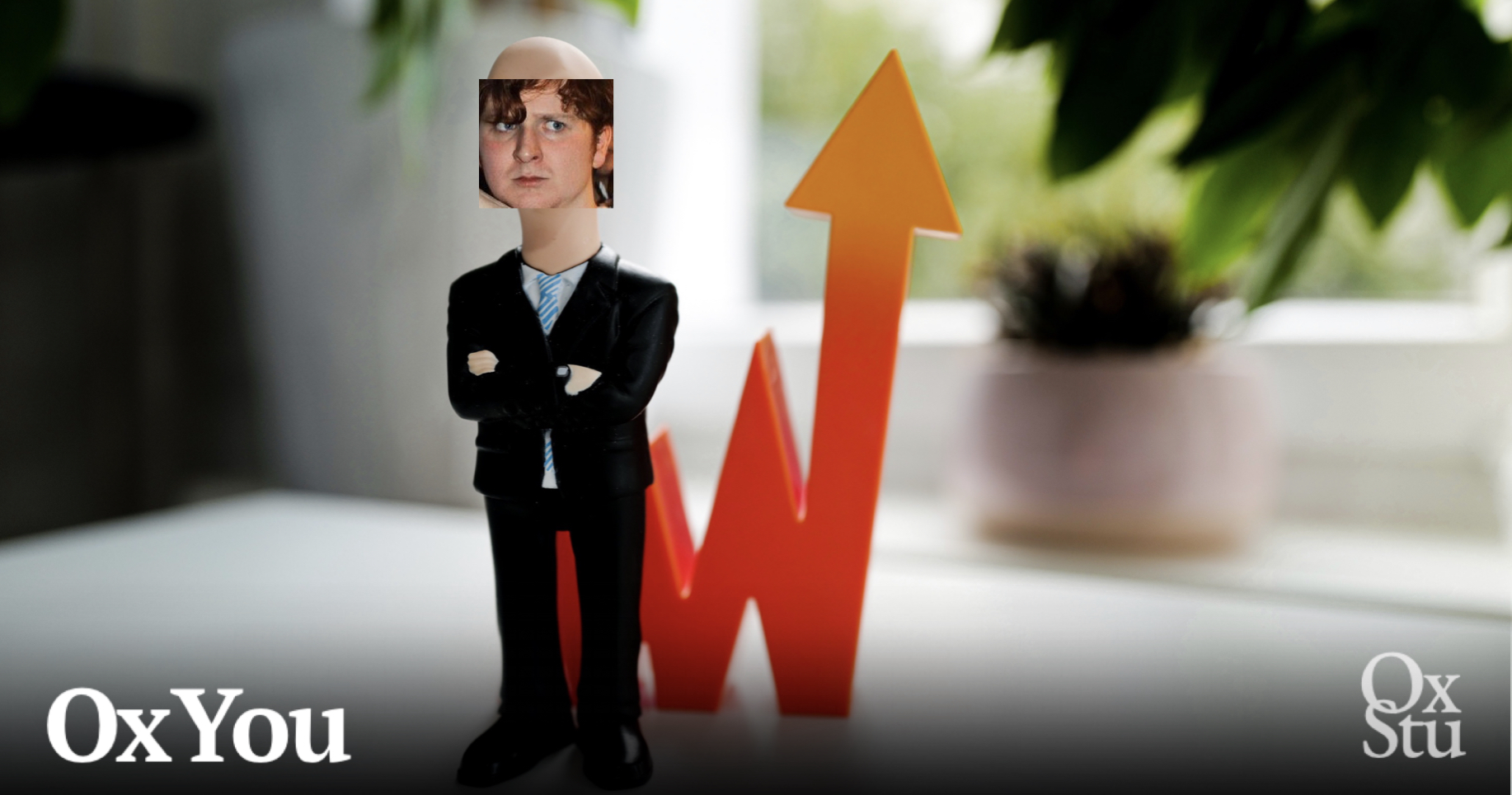 Image description: a bald Alex Foster figurine stands next to a jagged arrow pointing up

Moneygeddon: stocks in Sainsbury’s fall by 0.00008% leaving UK on brink of financial collapse

This week stocks in the supermarket chain Sainsbury’s fell by a catastrophic 0.00008%, leaving the UK economy on the brink of collapse. This incrementally massive change could have significantly little impact on the rest of the UK, economists warn.

Sainsbury’s emerged strong from the recession, with the popularity of Nick Clegg serving as proof of Britain’s preference for bland centrism in both politics and its supermarkets. However, this exponential growth could not last, and it didn’t last, as the piece you are already reading about is already telling you.

After the cataclysmically average performance of its stock this weekend, the City is on high alert and predicts that this could be the end of UK supermarkets as we know it, except also it probably won’t be that unless Tesco’s stock also falls by another quarter of a nineteenth of a percent within the next twenty-two days.

“This is why I shop at Waitrose,” said the Governor of the Bank of England when approached for comment.

Stocks move! In a stunning turn of events, this week saw investment bankers sprinting down the streets of New York in pursuit of some particularly volatile portfolio properties that lost their tempers and as a result left in search of the nearest cliff to fall off. One particularly fast moving ‘stonk’ was thought to have been left disillusioned by its unrealised potential after a promising adolescence led to a disappointingly low ceiling valuation.

Meanwhile in the world of technology there was scandal afoot in Silicon Valley. Despite calls for regulatory oversight, it is unclear whether Mark Zuckerberg’s creation of a clone of himself to run Facebook Skynet Meta’s privacy section will satiate his critics. Despite being a carbon copy of the man himself, it’s rumoured the clone (ZuckItUpTM) has had to resort to the ignominy of a manual passcode on his phone and tablet, due to Apple’s FaceID recent work to prevent non-human faces being used to unlock their devices. After being interrogated last year by American senators on why Facebook’s privacy settings didn’t prevent Donald Trump’s third wife’s cousin from accidentally retweeting a blackface porn video on her android, it seems likely that the world’s closest thing to an alien might find himself dragged back up in front of bureaucrats again soon if he doesn’t start creating clones that are less like himself and are instead a little more human

Good stocks bet of the week: Snap Inc. – union elections call for desperate hacking, including re-downloading messaging apps that were already dead 2 years ago. A resurgence in stock price could be on the cards

Bad stocks bet of the week: Compare the Meerkats – Russians oligarchs aren’t exactly on brand right now, even the non-human ones

“It’s no surprise that [Ann Summers] failed to acquire Toys R Us. In a post-Love Island world, their model is simply unprofitable…Who amongst us even wants to haves sex any more? Definitely not me. Buy bitcoin.” – Paul Chuckle

Wow! Money! Credit! Mortgages! Sounds pretty rad, right? You’re stuck and don’t understand any of it? No, sweat! Coolio! Finance can be FUN! And this column is here to show you – how to be a savvy student saver! Woo!

Finance intimidating? Don’t worry, I thought so too! I thought money grew on trees until I looked in my wallet one day and realised it didn’t! But that’s totally cool, because it can grow on trees – you just have to find the right tree for you!

Say you have a seed in your pocket – a small little seed! This is all your Netflix and coffee subscriptions! Now yeet that seed right into the Atlantic Ocean because you don’t need that in your life, babes!

You need your other seed, the seed in your other pocket – why didn’t you look there first, silly? Except you’re not silly, I did the same thing too! I used to walk around with a beer bottle strapped to my head and wonder why my ears were always hurting – the tape was right around my cartilage, duh! What a silly goose I was! But not anymore, not since I’ve cancelled my Netflix!
Now take your new seed and invest it in a LISA, ISA, JISA, or CATISA, but absolutely not a TISA or MISA – those are for idiots who don’t know anything! Put anything in this account – every little penny makes a difference but I find it especially useful to go to my parents first and ask for a lump sum of £50,000! This sets you up super well and is super easy to do, especially if your parents have stable well-paying jobs!

Now you know how to be a savvy student saver! Get out of that overdraft, it’s that easy! Next week – we talk about bitcoin! YAY!!

Disclaimer: please don’t follow any business or finance advise given on this page unless you want to lose quite a lot of money