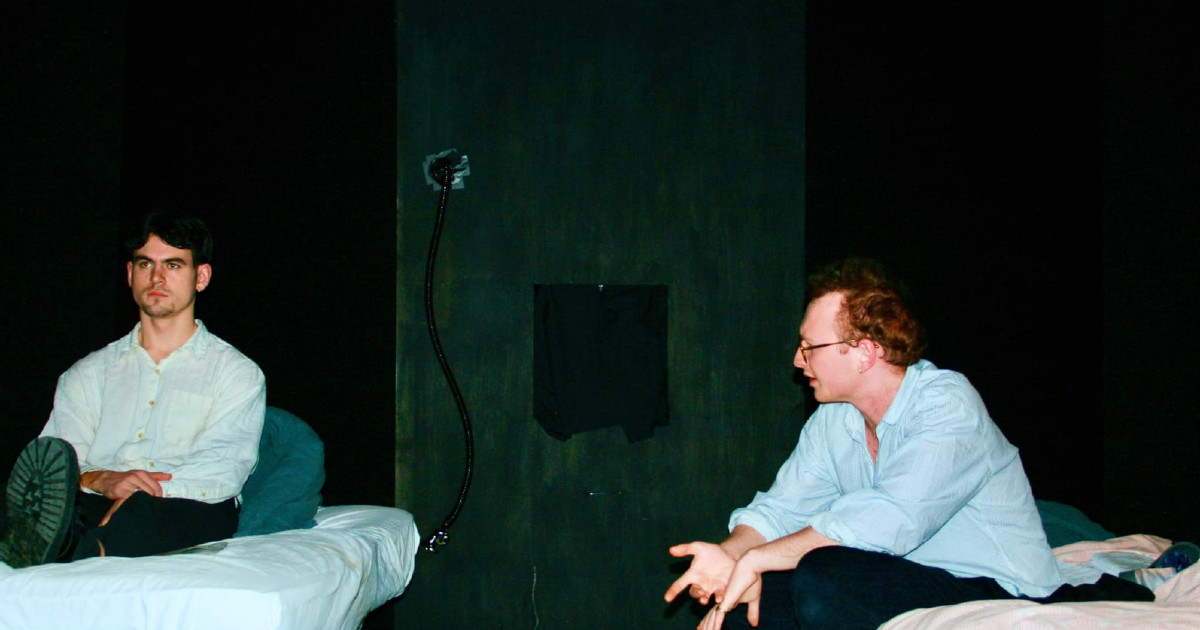 Pinter at the Pilch: “The Dumb Waiter” Review

Image Description: Photograph of actors on set of The Dumb Waiter.

A2 Productions’ take on Harold Pinter’s The Dumb Waiter was nothing short of a success. The sold-out run in Sixth Week saw Pinter’s gripping one-act comedy-drama expertly delivered complete with hilarious performances and tension levels raising the roof.

Having located The Pilch Studio, slightly confusingly situated in part of Balliol College’s off-site accommodation, we took our seats in a small-ish room, where the play’s two characters, Ben (Noah Radcliffe-Adams) and Gus (Henry Calcutt), had already taken their positions on two prison-esque beds. The audience filed in to Ben’s focused and ceaseless newspaper-reading and Gus’ intermittent sighing. The two are hitmen who are waiting in the basement of a former café for their next target to arrive.

When the lights go down, Gus gets up and begins to tie his shoelaces with difficulty. His hands moving twitchily; the first hint of the unease which is to subtly permeate the entire play. He then takes off his shoes again one by one to find a squashed cigarette packet in each, to ripples of laughter in the audience. Indeed, co-directors Alex Hopkins-McQuillan and Alex Foster manage to combine the comic and the bloodcurdling aspects of Pinter’s original script to great effect. The tension is maintained throughout the play but the dark subject matter is handled with remarkable levity, honest to Pinter’s writing.

Being a play with only two characters, The Dumb Waiter relies to a great extent on the performances of its leads – and Noah Radcliffe-Adams and Henry Calcutt shine as Ben and Gus. The two are compelling actors with undeniable stage presence and bundles of chemistry who keep the audience suspended on the edge of their seats throughout. Calcutt feverishly paces up and down the stage, conveying Gus’ meek demeanour and anxious disposition, whilst Radcliffe-Adams’ continuously brooding expression and rigidity of posture suggest Ben’s attempts to mask his true emotions. We gradually come to distrust Ben’s detachment due to the contrast with Gus’ more human, emotionally-charged reactions to the situations they find themselves in.

Within the Ben-Gus ‘team’, Ben is clearly the more domineering figure of the two. He meets Gus’ uncertain avalanche of questions with evasive statements and curt commands. This is not made clearer than when Ben icily asks Gus ‘who took the call?’, referring to the call he received which summoned them to their current job, and Gus grudgingly replies ‘you’. The skewed power dynamic is visually reinforced by the disparity in the size of the two beds, as Ben’s is noticeably taller than Gus’.

The mundanity of much of the dialogue serves to contrast and emphasise the play’s disturbing underbelly. Ben and Gus make inane conversation about newspaper articles to disguise the simmering feeling of unease. Their shock at tragic stories like an old man being run over by a lorry becomes all the more ironic once we know what they do as an occupation. However, the underlying tensions surface at moments where trivial disagreements become violent, like the argument they have about whether one can say ‘light the kettle’ as opposed to ‘light the gas’. The quarrel culminates in a brutal outburst from Ben as he grabs Gus’ throat, one of the few times he betrays his own disquietness.

The play manages to communicate the horrors involved in Ben and Gus’ job without making it gratuitously graphic. Gus’ comment about a previous job, ‘I can’t remember a mess like that’, and his question ‘who clears up after we’re gone?’ sent palpable chills throughout the audience. And yet, the comic relief of moments like their tiff about an Eccles cake rendered them sympathetic and likeable characters, even if they are hitmen. This is a definitive testament to the actors’ and directors’ skill at investing the performance with a lighthearted touch.

The Pilch provides an excellent space for this two-character play, as its intimacy means we are literally confined in the room with them. The claustrophobic feel this creates mirrors the entrapped state of Ben and Gus in their windowless basement room, and heightens the play’s explosive moments as we get to witness them up close. Particularly powerful is Gus’ distraught eruption after several unnerving exchanges through the dumb waiter with whoever is upstairs. They have been sent matches when there is no gas, and requests for food items they do not have. ‘What’s he playing these games for?’, Gus cries out in almost maniacal despair.

The set consisted only of the two beds, a chair, and the dumb waiter itself. The stripped down stage and the limited use of lighting and sound effects was the appropriate decision for a play where so much of the significance hangs not only in what is said, but, crucially, what is left unsaid. Pinter himself has commented on the effectiveness of the naked vulnerability of silence in being as revealing as speech, if not more so. The pauses when Ben avoids answering Gus’ questions, or before they open the envelope slipped mysteriously under their door, leave a sense of foreboding in the air.

When Gus left to go to the toilet one last time (he made several trips throughout the play), the stage was plunged into a deep violet light, and in Gus’ absence Ben’s conversation through the dumb waiter’s speaking-tube was especially sinister. Radcliffe-Adams adopted a menacing stance, a mere silhouette against the wall; his voice becoming as cold and impenetrable as his motives. In the play’s final seconds, with the suspense mounting to a peak, members of the audience held their breath and glanced from Ben to Gus to Ben again as one pointed a gun at the other.

All round, this was a riveting production that deliciously interpreted every facet of Pinter’s play, from the dark humour to the inescapable feeling of dread to the absurdity of the characters’ interactions. They did justice to Pinter’s script – and they did it with thrilling style.