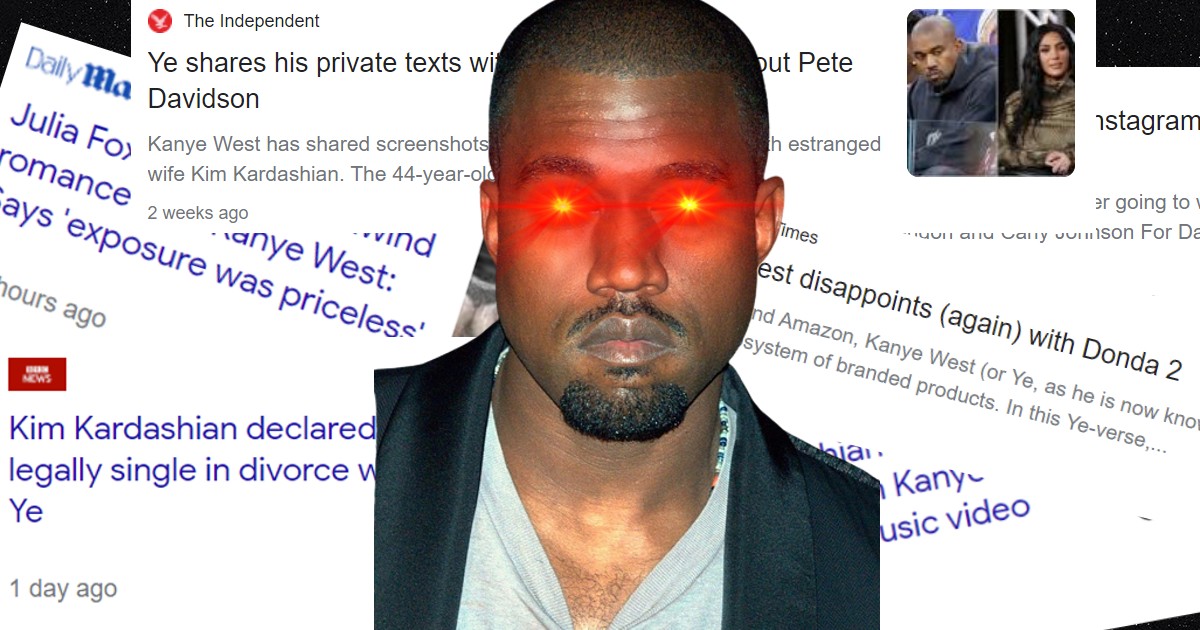 Image description: Kanye West overlaid in front of a series of news headlines about him

Kanye West’s raging instability has become somewhat of an internet meme recently, with his behavior ranging from the positively bizarre–constantly posting and removing Instagram posts, only posting in ALL CAPS, and so on–to downright unhinged, such as buying property overlooking his ex-wife Kim Kardashian’s house. In what seems like a long and tumultuous fall from grace, Kanye’s downward spiral can be traced all the way back to the death of his mother Donda in late 2007, and has progressively intensified. Since his first brush with popular hatred after the infamous “Taylor, Imma let you finish,” Kanye has redeemed himself in the eyes of the public (though not, perhaps, Taylor Swift fans), fallen into controversy, redeemed himself again, and fallen into controversy again in a seemingly never-ending cycle.

Yet as wryly as I may recall the old Kanye, the new Kanye has felt like one prolonged controversy, one that has been quite painful, both in the very public suffering of Kanye himself, and in the nauseating treatment of his mental illness as some modern freak show to exhibit and ridicule.

The public reaction to Kanye West became particularly scathing after his separation from former wife Kim Kardashian and his out-of-control actions since. To be very clear, Kanye’s obsession over trying to sustain a relationship with his soon-to-be divorced wife of nearly seven years is harassment, and should be properly condemned. As lawyer Annie Seifullah told Jezebel, “Targets of this type of abuse know that once they physically separate themselves, they’re still going to be the subject and target of the ex-partner’s obsession. And when the abusive ex-partner no longer has… a physical or emotional control of the victim because they have left the situation, the ex partner often resorts to causing havoc around their target in order to maintain power and control even after they’ve left their relationship.” Kanye’s actions should not be normalized, and the emotional toll of Kanye’s harassing behavior on Kim Kardashian, as well as on their children, is worsened by public coverage. For these reasons alone it is quite perverse that the internet is treating the entire situation as another mere media event.

The media treatment of Kanye vs. Kim not only paints over issues of harassment and abuse, but mental health as well. Kanye’s diagnosis with bipolar disorder is well known, and we can clearly see him struggling with the often profoundly disorienting symptoms. Even after being hospitalized due to a ‘psychiatric emergency’ in 2016, he has continued to alienate close friends through scathing outbursts, from mentor Jay-Z to frequent collaborators and protegés Kid Cudi and Chance the Rapper. With his recent tirade against everyone from Billie Eilish to Peppa Pig, it is evident that he is not fit to stay in the public eye, both because of his inability to maintain the social responsibility rightfully expected of public figures, and because of the obvious repercussions on his mental health.

The latter harms not only Kanye but those around him as well. It seems unlikely that Kanye even understands that what he is doing is harmful, which in itself is a product of how glorified grand displays of affection and romantic persistence are in our popular media. In moments of clarity, Kanye has shown remorse and willingness to take accountability, but these moments of clarity seem now few and far between.

Kanye should not be given a platform–and while he has nearly 15 million followers on Instagram and 31 million on Twitter, I argue that the primary enabler of Kanye’s behavior is the controversy-hungry media. Kanye is a public figure because we and the media made him so; it is simply not the case that major artists need to be public figures. A media notorious for stalking and privacy violation, which Kanye himself has fought against, is all too happy to publicize Kanye’s erratic behavior, making every Instagram post and every slice of celebrity beef into a story one way or another.

While we can’t control Kanye’s incessant posting on social media, or his campaign for presidency, other media platforms in particular can and should be wary of how they address Kanye’s behavior. Presenting Kanye’s comments as beef between celebrities normalizes abusive behavior, as previously mentioned, and giving so much publicity to Kanye’s comments in the first place is problematic. The media’s endless coverage of every detail of Kanye and Kim’s messy separation gives Kanye’s words and actions legitimacy. This is not to say that Kanye is exempt from personal responsibility over his actions because of his mental illness. But giving someone in Kanye’s mental state legitimacy is akin to giving a drunk person the keys to a car.

Moreover, much of the criticism of Kanye has been dangerously ignorant of the rapper’s mental health issues, and often feels like punching down. It should make anyone who has dealt with these issues in any way grimace. Azealia banks, for example, called Kanye an ‘abusive psychopath,’ while even Snoop Dogg taunted Kanye over his ex-wife’s infidelity. While it is right to call out Kanye’s abusive behavior, it shouldn’t be hard to do so without criticizing a mentally ill person for being mentally ill. Meanwhile, it is pathetic that so many think it is now cool to roast Kanye: doing so is goading someone into further action knowing they will only make a fool of themselves.

Critics are also quick to point out that Kanye is often unwilling to take the medication prescribed to him or undergo further care. Yet as therapist Rwenshaun Miller told The Cut, “‘take your meds’ is a reductive way to think about addressing mental-health challenges. For many people with bipolar, medication can be lifesaving, but it’s just one tool for treating a complicated illness where episodes are often triggered by and intertwined with stress and trauma.” That is, just because Kanye has the resources to access care that many of us cannot does not mean he should magically be ‘cured’ of bipolar as if it is a broken leg.

Putting aside the historically shameful media coverage of celebrity struggles with mental illness, most people are happy to let Kanye deal with his issues as he sees fit as long as he doesn’t harm others. Therein lies the problem–very few people took Kanye seriously when he said slavery was a choice, for example, or supported Donald Trump. Yet the press coverage provided Kanye a legitimacy that enabled racists or Trumpists to justify their misinformed opinions through Kanye. And with Kanye’s messy divorce, media coverage has undoubtedly directly worsened the emotional toll on Kim and the kids and normalized Kanye’s behavior. Even those lambasting Kanye’s character over his behavior do genuine harm to those suffering from mental illness. A greedy media and celebrities quick to hop on a clout train are  more responsible for social harm and at least as responsible for his family’s emotional distress as Kanye is.

Admittedly, I too have laughed at the public spectacle of Kanye West, for no reason other than the sheer absurdity of some of Kanye’s actions. Yet taking a step back, the entire situation makes me nauseous. I see someone who is struggling from a serious mental illness that is hurting himself and those around him being paraded around, and being taunted into further embarrassing himself and his family for our entertainment. Of course, Kanye must take responsibility for his harassment behavior, but is it so hard to hold him accountable without further magnifying his platform or being callous about mental illness?

As someone who has struggled with a similar diagnosis, I have often found myself sympathetic of Kanye even at his worst. Everyone experiences symptoms differently, and I can only imagine how terrible it must be to suffer through the highly disorienting symptoms I’m so familiar with while being unable to escape the stress of public scrutiny and the trauma of immense loss. I often find myself wondering–if I were in Kanye’s position, struggling with the same things he is, could I do better? If you confidently answer yes, then you don’t really understand mental illness.