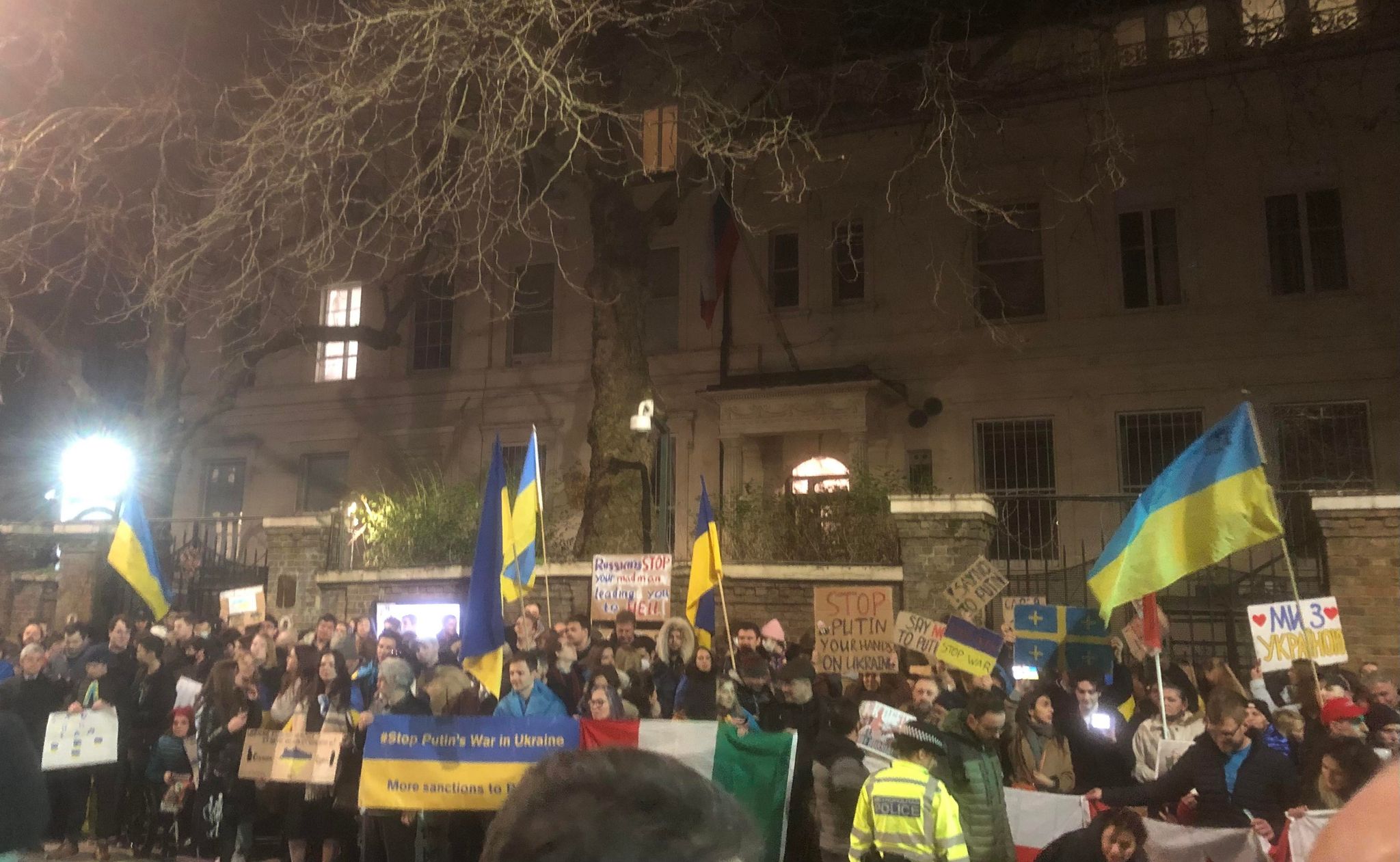 Protest at the Russian Embassy

On Wednesday evening I clambered out of Notting Hill Gate tube station and walked the three hundred metres to the Russian Embassy. In front of the grand Victorian townhouse was a forest of blue and yellow flags.

Chants cut through the night.

It was cold and dark, but hundreds of people had turned out to protest.

They either waved the Ukrainian flag or wore it, and many carried signs: ‘HANDS OFF UKRAINE’, ‘PUTIN IS A KILLER’, ‘STOP PUTIN’S TERRORISM’, ‘MORE SANCTIONS’, ‘RUSSIANS, STOP THE MADMAN LEADING YOU TO HELL’. Some were pithier: ‘PUTIN KILL YOURSELF’.

A loudspeaker blared folk music, and the Ukrainians present – they must have been more than half the crowd – joined in with the words. Notting Hill echoed with the sound. Meanwhile, double-headed bronze eagles perched on the embassy gates. Behind a spiked fence and a neatly trimmed hedge, the Russian flag swung gently in the breeze.

There were protestors of every age, though many were young. Despite everything that had already happened to their country, the Ukrainians I spoke to were hopeful and defiant. This was not a sombre occasion. Each passing car or bus that honked in support received a delighted roar. The protest organisers kept up a steady stream of chants: “Ukraine is not Russia!’ and a call and response favourite: “PUTIN!” ‘Hands off Ukraine!’, “PUTIN”, “Hands off Ukraine!’.

There didn’t seem to be much bitterness, only national pride.

The protestors did not direct their chants at the Russian embassy. Instead, they split themselves across the road, and the two sides of the crowd cheered each other on. Rather than throwing their words against a dark and unresponsive building, they could see each other’s faces, and a patch of London made momentarily Ukraine.

For the seven decades that Ukraine was a part of the USSR, displaying the Ukrainian flag was a crime, punishable as ‘anti-Soviet propaganda’. By celebrating their national identity, Ukrainians are exercising a right their grandparents did not possess. It was only 31 years ago that Ukraine became independent. Now its people may have their right to self-determination stripped from them once again.

This was the night of the 23rd, and so all the conversations were still couched in terms of ‘if’ and ‘when’ and ‘will he?’. Everything was speculative, conditional. We didn’t know it, but in less than 10 hours Putin would thrust Ukraine onto the frontline of a new reality.

Amidst competing accounts of the fighting, it’s very difficult to get a clear picture of how the invasion is developing. But this is certain: Putin is the aggressor. He justified his ‘special military operation’ with a plan to ‘de-nazify’ his smaller neighbour. There’s madness in this rhetoric. Ukraine is led by an elected Jewish President, Volodymyr Zelenskyy. It is Putin who has launched an unprovoked assault, his forces lunging towards Kyiv. Who is behaving more like a Nazi?

For us – outside of Ukraine – it’s difficult not to feel powerless. Especially when events seem to swing so heavily on the whim of a single person, the Russian President. But there was no hopelessness among the protestors on Wednesday. When I asked the organiser, Natalya Ravayua, what more she thought the UK government could be doing to deter Putin, she was very clear:

“Sanctions. Sanctions on the 40 to 50 oligarchs in London. Freeze their assets. Freeze the Russian banks, and go after their [the Oligarchs’] children’s money, their wives, their mistresses.”

She was confident in the resolve of Ukrainians. “They will resist”, she said, “because it is their land, [but if Putin invades] it will be the end of Russia, it will have invaded too many places.”

Moments before I spoke to Ravayua I had asked another protestor – a burly middle-aged man – what he made of Putin. “Arsehole”, was all he said.

I had expected Ravayua to give the same answer. If my country was being attacked by a superpower, I’m sure it’s the sort of blunt response I would have given. But instead she offered Putin measured, sage advice:

“Invest in your own people. Why are you spending all these resources on war? The Russian people, all 145 million of them, they cannot want this.”

No rage, or wild calls for vengeance.

It was an astonishingly measured response. It reflects the fact that Ukrainians possess little ill feeling towards Russians in general, only towards the man who has brought war to their country. Anti-war protests in Moscow and St Petersburg – held despite the threat of a police crackdown – suggest that many Russians feel the same.

Mounting casualties are likely to reinforce that anti-war sentiment. Precise numbers are difficult to discern, but 48 hours after the invasion began, hundreds had certainly already been killed, perhaps thousands.

Ukraine’s people are standing between Europe’s democracies and a rampaging dictator. They need every ounce of support the West can give. This is one of those periodic moments when a generation finds that it must reaffirm the values of sovereignty and national self-determination. It is very important that Putin ultimately loses.

The final act of the protestors gathered on Wednesday night was to sing the Ukrainian national anthem. Putting their hands to their chests, the crowd belted out the song. It was hard not to be moved. The voice of an embattled nation in the chilly London air.