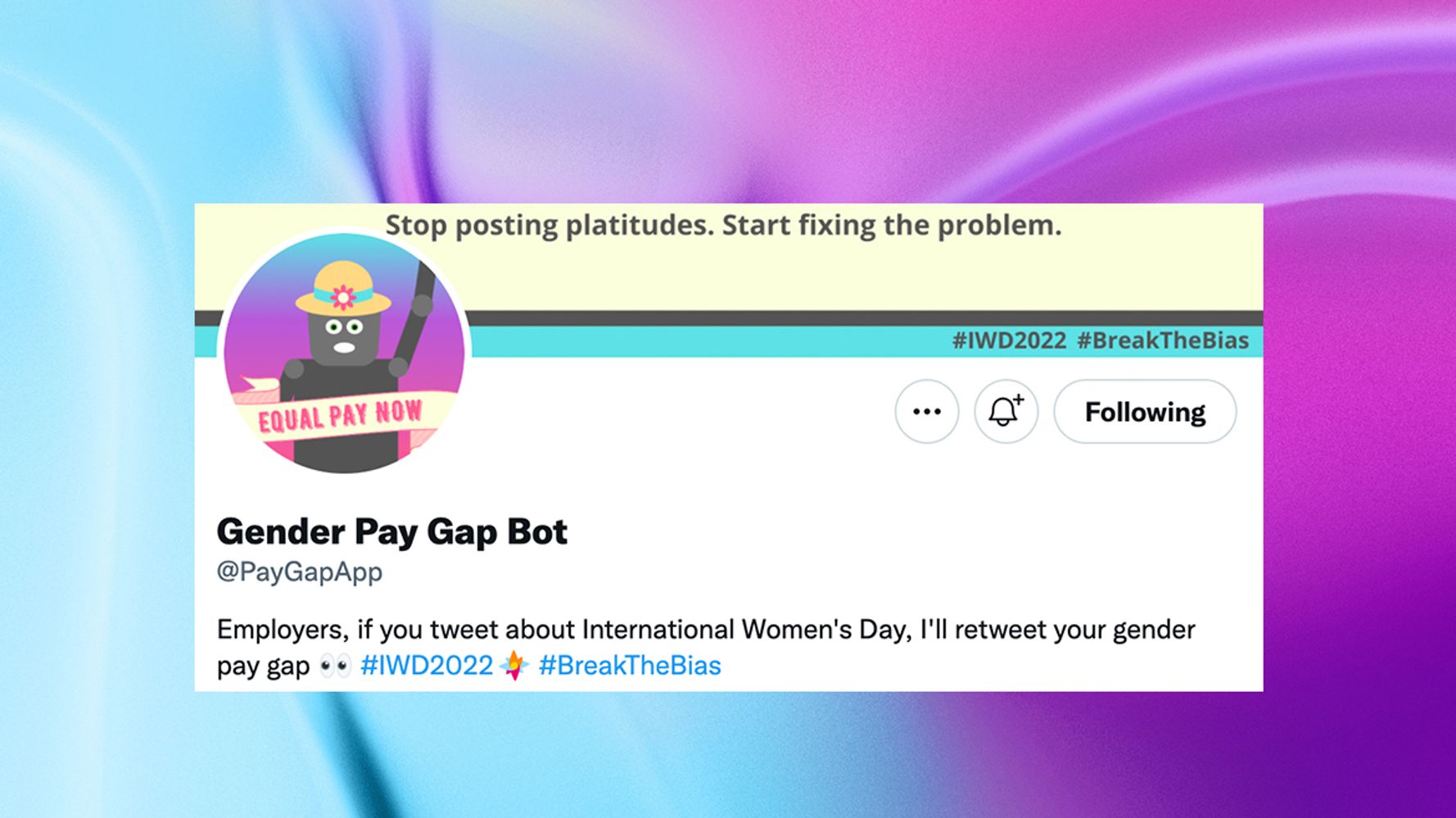 In Conversation with the Gender Pay Gap Bot

This year on International Women’s Day (IWD), like most others, companies and organisations took to social media to show their undying support and celebration of women. The posts came out in their plenty with tags and empowering quotes, this year following the chosen theme of #BreakTheBias. But, something was slightly different this year.

This trend of so-called performative activism is one we’ve seen on countless occasions in the past few years, particularly via social media. Companies in particular are keen to claim their innocence and show support for activists through their PR, often without incorporating any concrete actions or changes themselves. Indeed some of the PR stunts for IWD this year were so elaborate and ridiculous, it almost seems easier to just pay women fairly and equally. I spoke to Francesca Lawson, the creator behind the bot alongside her partner Ali Fensome, about how the idea came about.

“It came from the frustration of seeing companies distribute messages of ‘empowerment’, ‘inspiration’ and ‘celebration’ for International Women’s Day, without actually doing anything to progress gender equality within their organisation,” she told me.

Francesca works as a freelance copywriter and social media manager, and Ali is a software consultant. It seems the bot gave them the perfect opportunity to combine their individual skills, as Francesca explained to me how they split the task of creating the bot:

“I [Francesca] worked on the creative and strategic side, and Ali took care of the coding. I sketched out an idea for how we could best put this data in the spotlight, and Ali’s tech knowledge and skills brought it to life.

There are three main parts to it: first, a bit of code searches Twitter to identify the relevant usernames for the companies in the government data. Next, a listener watches for tweets from those companies using various International Women’s Day keywords. Then when it finds a relevant tweet, sent from one of the companies for which we hold gender pay gap data, it pushes out the gender pay gap as a quote tweet.”

It takes guts to openly and honestly confront so many organisations – many of which hold a lot of power – and display their insincerity in such a transparent manner. I asked Francesca whether she had been worried about backlash from said companies.

“I expected that more companies would challenge us on it,” she told me, “but so far none have contacted us to complain. It’s their own data, and it’s available to the public, so I hope those companies realised that we’re not the bad guys here…we’re just providing factual statements to counteract their emotion-led International Women’s Day PR. In fact, I’m absolutely amazed by the amount of support we’ve had. I didn’t imagine one bit that our story would be picked up by journalists in Australia, Brazil, the US, and across Europe! I think what this shows is there’s a thirst for transparency and authenticity from companies and on social media, and our account managed to tap into that.”

When it comes to the gender pay gap there are often countless arguments which arise about how to measure it, how accurate it is and what it can show us. Arguments which often miss the wider point – that women’s work is still undervalued in comparison to that done by men. The gender pay gap bot notably compared the median gender pay gap, rather than the mean. I asked Francesa what the thinking was behind this choice:

“Salary data covers such a wide range, that a small number of high/low salaries can distort the mean average. For example, the mean pay gap at a company with a female CEO is likely to be low, which can conceal issues with inequality at other levels. Although pay disparity between the lowest and highest earners is still a problem, the median excludes the extremes and therefore gives an indication of the ‘typical’ situation,” she explained to me.

Not to mention that the median can also point to the fact that there are more women in lower-paid positions than men, something which raises a lot of questions about how organisations should be levelling the playing field for all genders. But what more could they be doing?

“We’ll definitely be back next IWD if nothing else!”

“There are actions companies can take to resolve the inequalities within their organisations that they’re clearly not doing, because women’s median hourly pay was less than men’s for 77% of UK companies in 2020-2021,” Francesca explained to me. “Companies need to take responsibility for the inequalities in their organisations. It’s within their control to improve wages, introduce more flexible working patterns, improve their parental leave offering for all genders, introduce ‘blind’ applications and diverse interview panels to root out bias in their recruitment processes. Any of these things would help to remove some of the barriers women face at work, and reduce the gender pay gap.”

Although the gender pay gap bot did reveal some saddening truths about how much disparity still exists within so many UK organisations, it did also provide some glee for those of us who are sick and tired of their PR stunts and inaction. I asked Francesca whether we can expect to see the bot back for next year’s IWD, or even raising awareness of the many other existing inequalities. Luckily, Francesca and Ali seem unwilling to leave their project behind any time soon.

“We’ll definitely be back next IWD if nothing else!” she told me. “We’d love to be able to make a similar bot to challenge messages of corporate solidarity around Pride and Black History Month too, but we’re a bit limited by what data is available. We’re looking into a few different data sources which might make that possible, but what we really need is the UK government to expand compulsory reporting to include ethnicity pay gap data, for example. We know that problems with racial bias exist within companies, and we need to quantify the problem so we can start to fix it.”

Until then we can only hope that the light shone on these organisations’ hypocrisy this year will mean they can no longer shy away from what needs to change. Following the gender pay gap bot’s revelations, several organisations have actually deleted their original Tweets, presumably from shame and embarrassment. And who knows, maybe next IWD there will be people within them actually calling for change, rather than relying on a bot to do so.