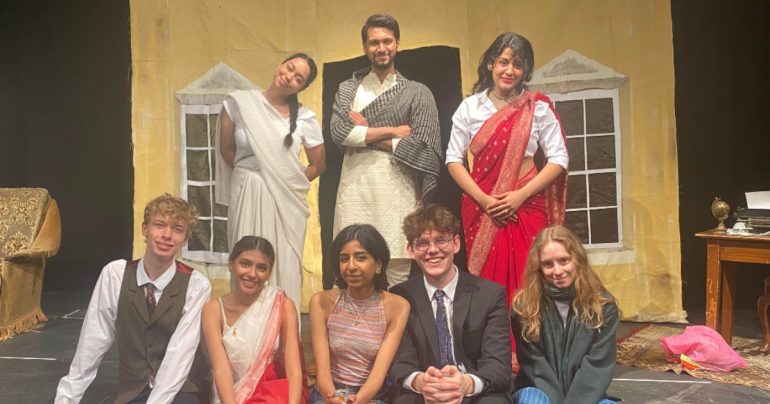 A Doll’s House Review: The Weight of One’s Grief

Upon entrance into the Keble O’Reilly, one cannot help but immediately notice how the overall set design is overwhelmingly beautiful. The backdrop features a house’s front façade painted bright yellow, bathed in colourful lights – representative of a charming 1898 Kolkata and its inhabitants. The muted decor and furniture of a quintessential Victorian living room strikes a most noticeable contrast against its surroundings. As we wait for the show to commence, there is a man onstage playing the tabla to traditional live music, and the room is gradually filled with the aromatic smell of burning incense.

This is how we are introduced into the Helmers’ home.

The Helmers are meant to be a perfect family – static and unflinching as beautifully polished dolls in a perfect, one dimensional world. Niru is revered for her beauty, and Tom for his political power. Yet, underneath the gleam of such superficial desirability, their entire family has been built upon nothing but deception and denial.

This is how their doll’s house eventually collapses, and falls apart.

As the audience sits through a two-hour performance (including a 15-minute interval), we witness the Helmer’s marriage being deconstructed, piece-by-piece, shattering both Niru and Tom’s perception of reality. As the story unfolds, we also witness how each of the characters in this show are plagued by the weight of their grief.

Grief is so very heavy – and yet, the entire cast have managed to carry this complex emotion impressively well. The portrayal of grief, growth, and womanhood, through Niru, Uma, and Mrs Lahiri, are especially poignant and admirable. Disha Kashyap as Niru Helmer, Kiran Dhillon as Uma, and Jade Khan as Mrs Lahiri deserve to be highly commended for their performances.

In the Helmers’ home, grief is intertwined with betrayal, and with unhealed wounds from previous generations.

While the show still adheres to Ibsen’s original that spotlights the imbalanced power dynamics and sexual politics prevalent within the Helmers’ marriage – it has also managed to capture the essence of grief as something inherently universal: regardless of gender, ethnicity, or social stature.

I think that is what I find most captivating and poignant about this adaptation.

The entire team from Velvet Morning Productions have impressively managed to retain the emotional depth and earth-shattering heartbreak that is so prominent in Ibsen’s original, into a setting that is geographically, so distant. If anything, the added dimension of Tanika Gupta’s post-colonial re-writing of this play just makes this story even more humanising, especially for women of colour navigating the many uncomfortable truths that often arise within inter-racial relationships.

Dr Rank, arguably my favourite character from the entire show, is portrayed perfectly by Joe Emmens. Charming and intelligent, yet equally pessimistic and morose in his worldview, I like to believe that Dr Rank is symbolic of the grief that often accompanies ‘what could have been’. He laments a lot about his ill health (despite being a doctor himself) and how being born with a venereal disease has stolen several years from his life. “To have to pay for my father’s sins is so unfair! But then I suppose every family has its crosses to bear. We’re all paying for past evils and mistakes. It’s what you Indians would call karma,” he mourns.

Likewise, his friendship with Niru, is also a wistful portrayal of an un-pursued romance that remains suppressed due to impossible circumstances. When he professes his love for Niru shortly before his death, he remarks how, “I have often felt that you prefer my company’s to Tom’s.” Niru’s initial response is one of shock and horror, yet, she eventually acknowledges this and says, “there are people that you love, and others that you would almost rather be with.”

While their interactions as Niru and Tom appear much more strained and less organic, I suppose that it is meant to be the entire point. Both Nixon and Kashyap deserve praise for their remarkable portrayal of Niru and Tom forcing a marriage to work despite being fundamentally incompatible from the start.

“To have to pay for my father’s sins is so unfair! But then I suppose every family has its crosses to bear. We’re all paying for past evils and mistakes. It’s what you Indians would call karma.”

Tom Helmer, whilst arguably still an arrogant, controlling husband, eventually sees himself at the end of the show grieving for Niru when she decides to leave. Nixon is impressive in depicting Tom’s outbursts of rage; It is a genuinely terrifying spectacle for any member of the audience to see how he is capable of demonising and vilifying his ‘little Indian princess’, to suddenly infantilising and smothering her again, with a fetishising amount of pity and condescension.

In the Helmers’ home, grief is intertwined with betrayal, and with unhealed wounds from previous generations.

We witness the characters whispering to each other about having to pay for their parents’ sins, and how Tom, in a moment of rage, tells Niru that “you have the same blood as your father… I should have known better.“ He deems her as unfit to raise his children, and blames the lack of her mother’s presence in her upbringing. Likewise, Uma’s character is laden with the grief of being estranged from her own child, and she makes up for this by playing a crucial role as their housekeeper, and the sole maternal figure in Niru’s life.

Krishna Lahiri and Kaushik Das (played by Ujaan Ganguly) are brilliant representations of the grief that accompanies class conflict, and financial difficulties. Ganguly’s acting was particularly emotional, and he wonderfully encapsulated Mr Das’ frustrations in the most raw, unbridled way. Tom describes him as a “monstrous, unscrupulous ill-bred Indian man,” and Ganguly’s performance of Mr Das does not shy away from portraying how he no longer refuses to tolerate such disrespect. He does not hesitate to point out to Niru how, “you marry a white man, take his religion and then treat us all the way they treat us?”

As the story draws to a close, it becomes evident that the destruction caused by endless layers of betrayal, especially within the Helmers’ marriage, has reached a point of no return. The grief that accompanies such a realisation is sharp, striking, yet painfully necessary. It is most evident when Niru cries, “for eight years, I’ve been living with a stranger, and had borne him children. I can’t bear to think of it, I could tear myself to pieces!”

Tanika Gupta’s adaptation of A Doll’s House is heavy with its endless portrayals of what it means to be human – the beautiful, the terrifying, and the mundane. More so, it brilliantly explores the extent of intimacy within human relationships that transcend race, class, and time.

A few months prior to the production, Director Jigyasa Anand approached me to ask if I would be interested in writing about their upcoming show. I eventually sat through an enthusiastic, two hour conversation with Jigyasa and with the production’s ‘resident historian’, Srutokirti Basak. We conversed excitedly about the production team’s ideas, vision, and creative aspirations.

Needless to say, when A Doll’s House was finally brought to life, it successfully lived up to every single one of my expectations.