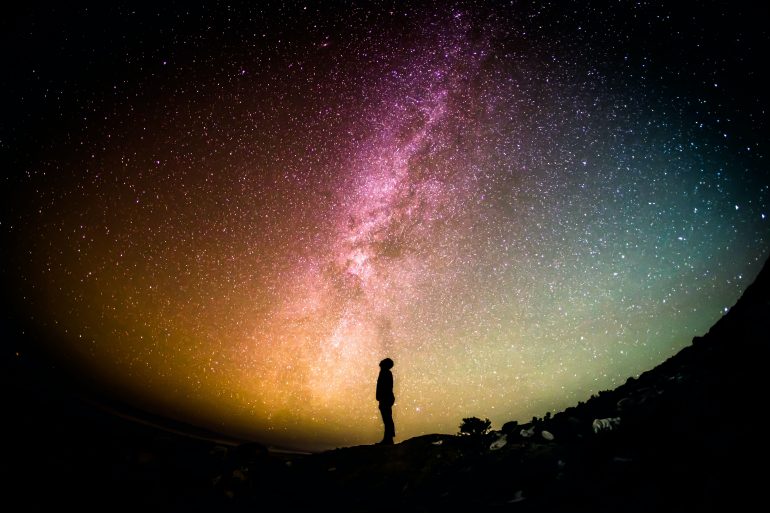 Plutoshine by Lucy Kissick: A Review

Plutoshine is a medium-sized science fiction novel written by Lucky Kissick, a recent PhD student at St Edmund Hall, released on 17th March. It is, to my knowledge, the first such book to explore habitation of Pluto since the New Horizons mission gave us those stunning images of the dwarf planet in the summer of 2015.

The story is set an unspecified distance into the not-too-distant future, but from ages mentioned, I would guess probably 100-200 years. Clavius Harbour, a Tony Stark-like figure, has set up a base on the surface of Pluto, just inside the “heart”, where its residents live permanently. The main character, Lucian Merriweather, arrives on Pluto at the beginning of project Plutoshine. He is a solar engineer from Mercury, whose role in the project is to oversee the construction of a giant mirror in Pluto’s orbit, to reflect the sun’s light and, over the course of centuries, terraform Pluto. On Pluto Lucian meets Nou, the 10-year-old daughter of Clavius, and her brother Edmund who runs the base. She has been totally mute for a year following an accident about which no one will talk.

Science fiction is a very broad genre. One way to characterise where a story lies inside Sci-Fi would be the spectrum between concept-driven and plot/character-driven. For example, much of Arthur C. Clarke’s work is very concept driven (think 2001: A Space Oddysey), with little characterisation, whereas The Long Way to a Small Angry Planet by Becky Chambers is very character driven, with character development being the thread that keeps one’s interest in the story. Plutoshine is probably closer to the plot/character driven side of this spectrum, with the development of the quasi-paternal relationship between Lucian and Nou being the thread that emotionally pulls the story together.

However, every story is about several different things on different levels: the storytelling feels quite similar to Cixin Liu’s The Three Body Problem, in that it is on another level about scientists doing science, with a fair amount of real science related to terraforming explained to the reader (or rather, to Nou). As someone who is easily irritated by false or badly explained science in fiction, I found the science uniformly convincing, as one would expect from an author with Kissick’s background.

The characterisation, particularly of Lucian and Nou, is very convincing. Lucian, a fairly unfit engineer supervising a PhD student, while in awe of the academic brilliance of the others on the Plutoshine team. His very extroverted and paternal nature sees him take as an apprentice Nou – the mute, introverted but very curious girl, whose backstory is explored through the plot. It seemed to me that some of the conversations between Lucian and his colleagues could believably have been adapted transcriptions of conversations the author has partaken in herself, such was the realism of some of these interactions.

I have to note that some things are left out of the discussion: in particular, there is no discussion of the problems presented by microgravity (about 7% that of Earth) with regard to human health, nor exactly how such a small colony can be self-sufficient (or if it is not, the logistics of getting these supplies so far out in the solar system). For books that explore these topics I would suggest The Expanse (James S.A Corey) and Martian Time-Slip (Philip K. Dick).

The particular characterisation of the future is also worth commenting on: while the terraforming and space travel technology is obviously far in advance of current technology, and it is made clear that humans have been living on planets other than earth for over 50 years, in this vision of the future the culture, dialogue, and social order feel very much the same as today’s – even down to the downright evil conduct of scientific journals (if that really hasn’t changed in 200 years we deserve to die out as a species).

“Science fiction is a very broad genre. One way to characterise where a story lies inside Sci-Fi would be the spectrum between concept-driven and plot/character-driven… Plutoshine is probably closer to the plot/character driven side of this spectrum, with the development of the quasi-paternal relationship between Lucian and Nou being the thread that emotionally pulls the story together.”

Thoughts – with spoilers for this and other (old) books, including Dune

To me, someone with a fairly robust but far from encyclopaedic knowledge of SF literature, two books stand out as having significant similarities to this: the first is 2010: Odyssey Two by Arthur C. Clarke, and the second is Martian Time-Slip by Philip K. Dick. 2010 contains life on Europa, an ice-world with an ocean of liquid water underneath, and also a life-form from outside the galaxy, far older than humanity, which urges peace for humanity.

Martian Time-Slip contains a malicious but charming patriarch who holds the native life of Mars in contempt and forms an uneasy relationship with the protagonist, who is taking care of a mute child, hoping to extract important information from the child. Martian Time-Slip also explores in depth the resource-dependence of a small civilisation on its parent, which is not explored in Plutoshine.

These elements are all recognisable in Plutoshine, and hence on yet another level it tackles similar questions about our relationship with intelligent extra-terrestrial life and the motives of our political leaders. Clavius Harbour turns out to want to destroy any native life on Pluto for the interest of keeping his civilisation on Pluto inhabited – and for the longer-term goal of forcing humanity to move beyond the solar system, to his own profit. It seems to me that this reflects today’s political landscape of charming political leaders with self-interested motives coming up against the real and inexorable challenge of climate change – indeed, terraforming is essentially harnessed climate change. I cannot help here mentioning the monolith of Science Fiction: not 2001, but Frank Herbert’s Dune series. The range of ideas explored in Dune is huge, and several are relevant to this book: Dune explores (particularly in Children of Dune) the terraforming of an inhospitable planet for human use, and how this can be sabotaged. Additionally, one of the strongest recurring themes of the series, particularly in the later books, of the “Golden Path” – the necessity of humanity’s continued development, and how political leaders may take truly evil actions for what they feel is the long term good of humanity. Plutoshine presents a new exploration of these ideas with respect to a very interesting setting – in many ways the opposite of Dune: cold, politically inconsequential, and without thousands of years of planning directing the unfolding events.

Plutoshine is not difficult to read. It is engaging and fairly fast-paced. Its concepts are interesting, and though there are a few common tropes, I certainly could not have predicted the resolution. The relationship between Lucian and Nou is very touching, and there is enough interesting scientific discussion to keep readers such as myself who aren’t usually so interested in character-driven stories, also engaged too.