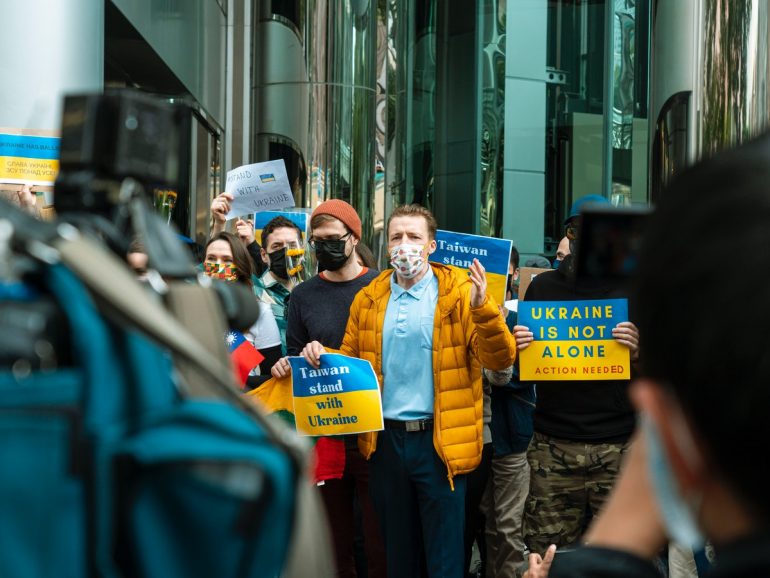 What Russia’s invasion means for Taiwan

On the 21st February 2022, Russia decided to recognise the ‘sovereignty’ of the Donetsk People’s Republic and Luhansk People’s Republics. This essentially undermined the sovereignty of Ukraine’s eastern territory and allowed Russia to move troops into Ukrainian land. After three days, Russian troops attacked what they called the ‘Russian land’ of Ukraine changing its covert support of separatists in Eastern Ukraine into an outright invasion. This was the climax of Russia’s persistent aggression made against Ukraine over the past thirty years since the crumbling of the USSR in 1991. Around six territorial disputes have been made against Crimea have been made since the collapse of the USSR. But why Crimea? It’s simple, why not control a strategically important land which gives you a warm water port in the Black Sea and expands your territorial waters closer to NATO and its ‘unfriendly’ states. Likewise, Putin has also claimed in 2008 during the NATO summit that the southeastern parts of Ukrainian territory were wrongly given to the region of Ukraine by Soviet Union founder Vladimir Lenin when the USSR was created in 1922.

But we must first understand the context of this situation. Russia’s invasion of Crimea in 2014 led many in the western world to finally admit that it was not going to follow down the path of liberal democracy like former Warsaw Pact states such as Estonia and Lithuania, and for that matter, Ukraine. The inadequate response from NATO after the invasion of Crimea showed Putin that Europe was not ready to engage in direct conflict with the Russian state, hoping that appeasement will be enough to bring the Russian state closer to the European Union.

Vladimir Putin has wanted to create a new wave of Russian patriotism that sees Ukraine as an essential piece of the Russian world. This and the incorporation of both Crimea and Belarus would solidify Putin’s place in Russian history. Crimea was recaptured in 2014; Belarus a de facto puppet state, especially since Lukashenko’s crackdown on democratic protests in 2020. This leaves Ukraine as the last major obstruction to Putin’s objective in Eastern Europe before he has to engage directly with any NATO states including Poland and the Baltic states.

But how is China directly affected by this situation, you may ask? Both China and Russia believe that Taiwan and Ukraine respectively are within their natural and historical boarders. Russia sees the land and the people of Ukraine as Russians. The state-owned news agency RIA Novosti printed an article in 2022 stating that Russia has overcome the humiliation of the collapse of the Soviet Union, restored the greatness of Russia, and is in the making of uniting all eastern Slavic cultures into a single pan-Slavic state. This will include Belarusians, Ukrainians and other “Little Russians.” Putin will stop at nothing to achieve this goal, regardless of the impact it has on the global stage.

“Ukraine is not even a state! What is Ukraine? A part of its territory is in Eastern Europe, but another part, a considerable one, was a gift from us!”

While situated on the other side of the planet, Beijing has a very similar position to Russia. Since the Republic of China reestablished itself on the island of Taiwan, the Beijing government has consistently claimed that the island is the 23rd province of China. We can see the similarities between Russia and China on how Ukraine and Taiwan are perceived not as sovereign states, but as regions that must be reintegrated into the Motherland after years of separation.

Taiwan has been a thorn on China’s side for the last 70 years.  The overall existence of two Chinas is a clear violation of People’s Republic of China’s Constitution and brings back memories of its ‘Century of Humiliation’ under European and Japanese invasion and occupation.  The One-China policy has proven to the world that China is on principle prepared to retake this rogue region.

Many in the autonomous regions such as Xinjiang and Tibet have experienced direct oppression from the Communist Party in its goal to achieve cultural and national unity across all of China’s time immemorial’ territories. This is a term often used by the Chinese government to refer to the idea of a Chinese state that stretches from the Himalayas to Vladivostok. But unlike the war in Europe, there has been no direct military conflict between Mainland China and Taiwan. While there have been multiple provocations by the Chinese such as the military encroachment of Taiwanese airspace monthly, the current likelihood of invasion is low. Adding to this, the limited build-up of Chinese troops on the coast across the Taiwan strait is another indication that even during the invasion of Ukraine, Beijing is not ready to capitalise on the invasion of Ukraine to invade Taiwan This is down to two fundamental reasons. Firstly, Taiwan’s de-facto separation from the mainland is guaranteed by the US and its carrier strike force which has been used before under the Clinton administration. Secondly, the logistics to get enough troops onto a relatively small island that has been preparing for an invasion since 1949 could quickly become a military disaster for China.

While there is a clear parallel in Russian and Chinese attitudes toward reclaiming their territories, the contexts behind their aggression are vastly different. Taiwan has a long-standing promise of protection from by the US regardless of which President is in the White House. This has been proven by a constant show of force by the American fleet that has kept Beijing at bay. While on the Ukrainian front, the 1994 Budapest Memorandum stated that the US would never defend Ukraine with troops, and it shows. The lack of time and enforcement of agreements has proven to the global community that history matters.

“The historical task of the complete reunification of the motherland must be fulfilled and will definitely be fulfilled.”

So, what is Beijing’s game? How can they reunite Taiwan into the ‘Motherland’ and fulfil the Communist Party’s prime objective since1949? Rather than an outright invasion that could isolate China from the rest of the world, as is the case with Russia now, China is using its ever-increasing economic power to impose its hegemony over Taiwan and to make it politically, economically, and culturally connected to the mainland. We can see this power being used today. Currently the island only has diplomatic ties with 14 UN member states, none of them in NATO or the EU. By putting pressure on other countries to cut diplomatic ties with Taiwan, China is free to bring the island further into its fold without any direct conflict. Further to this, the Russian aggression has left the Beijing government with safe knowledge that the West will respond and will be a source of discontent for the Beijing government, with the imposition of sanctions and provision of military equipment to Taiwan at a significant scale.

It is clear that after its departure from the European Union, Britain needs to expand its Global Britain strategy and support any new and emerging democratic state. It should be a priority for the UK to protect both itself and every democratic state across the globe. With the support of the US and the EU, a new sense of unified cooperation is required to stop any further aggression across the world.

Image Description: Taiwan Protest against the Russian invasion of Ukraine by Jimmy Liao