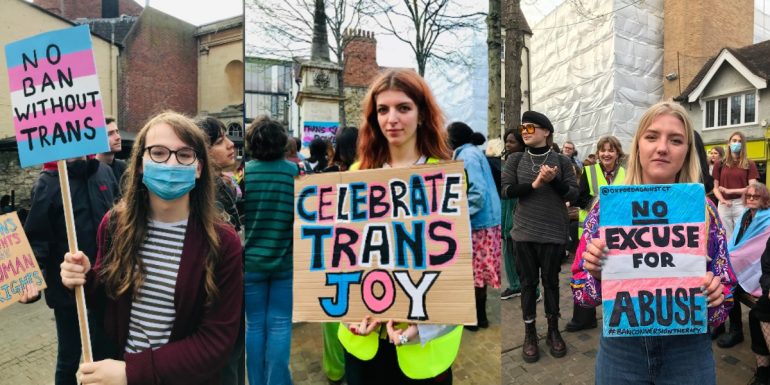 On April 19th (Tuesday), Oxford Against Conversion Therapy staged a protest at Bonn Square, Central Oxford. The group was formed in response to the Government’s changing position on the banning of conversion therapy. A diverse range of speakers took to the steps of the Tirah Memorial to speak against the government – these included members of the University of Oxford, Oxford Brookes University, and the Labour Party.

Many speakers chose to speak about the institutional actions they felt were oppressing transgender and marginalised voices. Oxford University Labour Club (OULC) was represented by two of its committee members including Secretary Fiónn McFadden, who was one of the many speakers praising the way in which the fight for Transgender rights was an undeniably intersectional one. There were shouts from the crowd as he recognised black trans activists, Marsha P Johnson and Sylvia Riviera and their hard work, crediting figures from history that the speakers noted have often been forgotten.

Jayne Ozanne, founder of the Ozanne Foundation — an organisation focused on stamping out religious discrimination based on sexuality and gender — spoke of the need for the media to be transparent on transphobia. They said, “We need truth and we need our media to cover the truth”. Ozanne’s admission to the crowd of how their life changed once they accepted their identity as a member of the LGBTQIA+ community echoed those of Clay Nash who had spoken earlier. Nash spoke of the shame they had felt, and the smile on their face as they shouted “I am here, I am Queer” was mirrored back by those in the crowd.

Nash, Co-Chair of the LGBTQ+ Oxford SU Campaign, spoke to The Oxford Student after the protest: “I think having a protest in Oxford especially is super important because Oxford does have a lot of political importance. It is basically a pipeline for Downing Street. So many prime ministers, and even more of the politicians in the House of Commons at the moment come from Oxford. And so, to have the student body and the community all come together as one to take a stand against transphobia and the exclusion of trans people from the ban on conversion therapy, I think it is very meaningful. And, I think it shows that the future will be better, and if we keep pushing on this issue then we can achieve things.”

Nash’s words were echoed in other speakers. Many transgender speakers shared that whilst there was often “pain in their identity”, they also felt “incredible joy”. Maz McCormick, a student activist studying Animal Sciences at the University of Nottingham listed moments of dysphoria they had experienced and finished by exclaiming to the crowd “But there is also euphoria too!”

Nash was not the only person to speak at the protest who holds position within student government. Sara Radha Pelham, who also rallied the crowd with chants and slogans in between speeches is the LGBTQ+ Representative for Exeter College. They spoke to the Oxford Student, reflecting on the national movement itself by saying “I think what’s telling about it is that people are working so hard to fight the government and it is such a difficult process…” They then turned towards the University of Oxford itself and added, “To get anything sorted at Oxford as a [university], as a whole you have to go through every single college, to get some people speaking about this, to get some awareness… to get people realising it is an actual issue.”

“We should not be having to not do our degrees to have an identity or have a right to live.”

Pelham went on to praise the hard work of students, especially student activists and people in JCR positions but emphasised “we should not be having to not do our degrees to have an identity or have a right to live.” 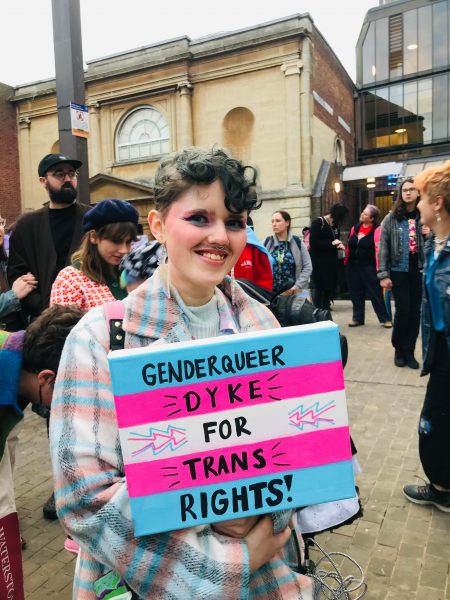 Alana Stewart from Oxford Pride, who introduced every speaker and is one of the founders of Oxford Against Conversation Therapy said, “So many people [have] turned up today. It just shows the fringe groups, like LGB Alliance, that they’re the minority [and] we’re the majority, there’s more support for trans rights in the queer community than there is against them.”

Another speaker, who when asked for comment merely said “I really don’t have anything more to add”, simply pointing to their sign which read “NO BAN WITHOUT TRANS”.

The protest today was intended as a space where members of the LGBTQIA+ community, and in particular the trans community, could express their frustrations at being excluded from the government’s plans in banning conversion therapy. Molly Mantle, founder of Ban Conversion Therapy UK stated, “We’ve waited long enough for the government to protect the LGBTQ+ community with a comprehensive ban. This isn’t an LGBTQ issue- everyone should care about the continuation of this dangerous and pseudoscientific practice.”

Image description: Zoe, Leila and Molly holding their signs at the Oxford Against Conversion Therapy protest.