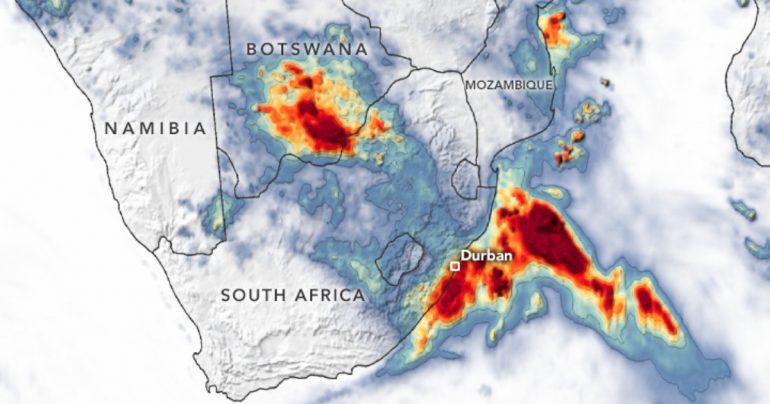 On the Reality of the Durban Floods

Image Description: A map of the 2022 April floods in South Africa.

Walking off the plane at King Shaka airport on the 14th of April, I wasn’t hit by the same wall of hot air I’ve come to love when visiting family in South Africa. Instead, we emerged from our flight into a soggy gloom reminiscent of a cold English March. The rain was falling with a disastrous intensity on South Africa’s east coast – though the extent of the rainfall had yet to make ripples on mainstream media or on my family as we traveled to Durban.

The severity of this rainfall failed to dawn on me or my family during our taxi ride to the hotel. Despite the continual downpour en route, our taxi driver, Marlon, kept up a light-hearted (and continual) stream of chatter about our holiday, COVID-19, the dangers of using Uber in South Africa, and consequently, the benefits of his multiple shuttle companies. It was only after we had screeched to a grinding halt on the N2 (one of Durban’s busiest highways) that the conversation veered towards the floods.

As Marlon swiftly manoeuvred out of the standstill, using the hard shoulder as a natural 4th lane and casually driving the wrong way back up the highway to find an alternative route, he cursed the disruption the rains were having, but attributed the traffic jam to a police roadblock. South Africa is, after all, no stranger to such things. It was only when we noticed  the complete lack of cars on the other side of the highway that we began to realise this wasn’t a roadblock. Instead, a bridge further down the road had crumbled as a result of the almost apocalyptic downpours.

The Durban region in the North Western province of Kwa-Zulu Natal (KZN) has experienced some of the worst flooding and associated landslides in living memory. The catastrophic flooding has displaced more than 40,000 people and the current death toll is estimated at over 420, a figure that will undoubtedly increase as ongoing recovery missions regularly pull bodies out of the mud and tidal zone. Damage to infrastructure, homes, businesses and at least 248 schools is estimated at over 757 million Rand (£39m) and Durban port (the busiest in South Africa) has been extensively damaged and subjected to widespread looting.

Over the 24-hour period of the 11th of April, an excess of 300mm of rain was dumped over KZN, equivalent to around 75% of South Africa’s annual precipitation. This was the heaviest rain recorded in over 60 years. The rains were the result of a cold weather system which rarely reaches as far south as South Africa, but causes large-scale destruction in neighbouring countries like Mozambique. The collision of this cold weather front with the warm, humid Durban climate led to rainfall “of the order of values normally associated with tropical cyclones” as the South African Weather Service reports.

It is hard to attribute individual weather events to climate change under any circumstance, but is particularly difficult to do so in places like KZN and across much of Africa. This is because the absence of comprehensive historical rainfall records makes systematic climate analysis nearly impossible. These gaps in the climate records are an example of climate science apartheid between the global North and South, where the places facing the most immediate and existential threats from climate change are the least studied, measured, and understood. To quote Dr Friederike Otto from Imperial College London, “the people least responsible for climate change are bearing the brunt of the impacts”.

Despite the clear gaps in climate records, it’s undeniable that the intensity and frequency of storms such as those Durban is currently experiencing are increasing as a result of global warming. In a landmark statement, South Africa’s president Cyril Ramaphosa described the flooding as “a catastrophe of enormous proportions” directly linking the event to the climate emergency in a way that South African officials have rarely done before. Upon visiting the flooded metropolitan area of eThekwini and seeing the devastation first hand, Ramaphosa claimed “we no longer can postpone what we need to do, and the measures we need to take to deal with climate change” and declared a national state of disaster.

Post-apartheid, Durban and its surrounding urban settlements have been among the fastest growing metropolitan areas. This puts immense pressure on the already poor and racially segregated infrastructure of the majority black population. Much of the area’s population live in flimsy shacks in informal settlements called townships which are often constructed on steep hillsides or in valleys in close proximity to rivers and lack sufficient foundations. The absence of key infrastructure places communities at an increased risk of climate disasters, as seen in the staggering death toll from these floods and mudslides.

What became devastatingly clear during my stay in Durban was the way in which deep-rooted, ever present racial divisions perpetuated climate injustice. The hotel my extended family and I were staying in didn’t have water for the duration of our visit, but otherwise it remained completely undamaged. The minor inconveniences of boiling swimming pool water for baths were utterly insignificant compared to the tragic loss of life, livelihood, and possessions experienced by those all around us. This disparity in impact points to the fact that, while what is occurring is a natural disaster, the sheer magnitude of death and destruction can be more readily attributed to man-made causes. It was not so much the amount of rainfall, but the sheer inadequacy of infrastructure and housing, especially for the most socio-economically vulnerable, which is to blame for the immense loss of life. This should be unequivocally viewed as climate and racial injustice in its most lethal form.

Friends involved with beach clean-up efforts relayed the heart-breaking scenes of sweeping up mops, spatulas, kettles, bedsheets from the high tide mark – the entire contents of people’s homes, people’s lives. During our stay, the majority of beaches were closed for public use. We were told it was due to the risk of raw sewage and debris in the ocean, but in retrospect, I think it was the risk of finding bodies.

During my stay, I began asking bartenders, reception staff, and waiters at the hotel about their experiences of the flooding. Theo, a bartender in his 20s, recounted how his entire house had been washed away in the floods, leaving him with nothing but the clothes on his back. His neighbours, a family of four, had all been swept away along with their house, down the river and out to sea — a fate that Theo claims would’ve been his had he not been at work.

Robin, the chief waiter in his 50s, told me a similar story. He lived next to a cemetery and had witnessed coffin after coffin unearthed, only to then disappear downstream in the torrents of water. His neighbours had also lost children. While they were helping out on a recovery mission, they  had found a body buried in the mud and a man still in his buckie (pick-up truck) decapitated from being thrown around in storms.

These stories of local communities bearing the responsibility of plucking body after body from the mud and under the corrugated iron sheets of township shacks as clean-up missions continue are far from uncommon. Already, various similar accounts are emerging across the province. In a gut-wrenching mockery however, those still alive have no option but to come into work, over Easter, away from their families and communities, in order to survive.

Assuming climate change would be the most common answer, I often suggested this in my question (poor interview technique on my behalf), but was met every time with an awkward silence and uncertain glance. No, it wasn’t climate change, they claimed. Instead, Theo informed me that similar storms had occurred in 2013 because a local fisherman had accidently caught and dredged up a mermaid onto local beaches. He offered photo evidence from a friend, should I be interested. As a consequence, the weather was acting up and producing storms. Slightly stunned by this response, I asked if a similar mermaid had been found this time, to which Theo shook his head in apprehension, saying, “no, not that I’ve seen on social media yet”. This was also a source of anxiety for all three men behind the bar, who had joined in our conversation. It would be explainable if a mermaid had been found, but thus far there was a worrying emptiness on the beaches.

Robin, however, was unconvinced by the mermaid. Instead, he attributed the floods to UFO sightings. He also mentioned nuclear fallout and radiation, but I was unable to ascertain the links between these and the floods before Robin got whisked away by the imperatives of dinner service.

In relaying these conversations, I am in no way meaning to delegitimise the understanding of these storms by local people, or the importance of community perspectives, which historical climate science often neglects. The epistemic violence of rejecting place based, lived experience of those at the forefront of climate impacts as ‘folklore’ or ‘superstition’ in favour of western ‘experts’ is undeniable neo-imperialism. This effacement of people’s epistemic beliefs – either by branding them as mere ‘superstition’ or ‘folklore’ – constitutes a credible existential threat.

These conversations about the floods also point to the incredible inequity of climate change education, and the immense privilege in not only understanding the basics of climate change, but then having the capability to deny its existence from a point of safety, comfort, and running water.

The Durban floods demonstrate the dire need for much more robust and wide reaching climate education which engages with local communities deeply, respectfully, and without undermining traditional knowledge. In this way, those at most immediate risk from climate disasters can be better equipped with effective and meaningful mitigation and adaptation strategies. This one experience has again exemplified that the dire existential consequences of a warming world are a reality across the world now, rather than a future potentiality and must be addressed with the urgency such a crisis requires.

To provide aid to the recovery efforts, please consider donating to the following charities under the following link: https://www.timeslive.co.za/news/south-africa/2022-04-14-16-charities-you-can-donate-to-to-help-flood-relief-efforts-in-kzn/