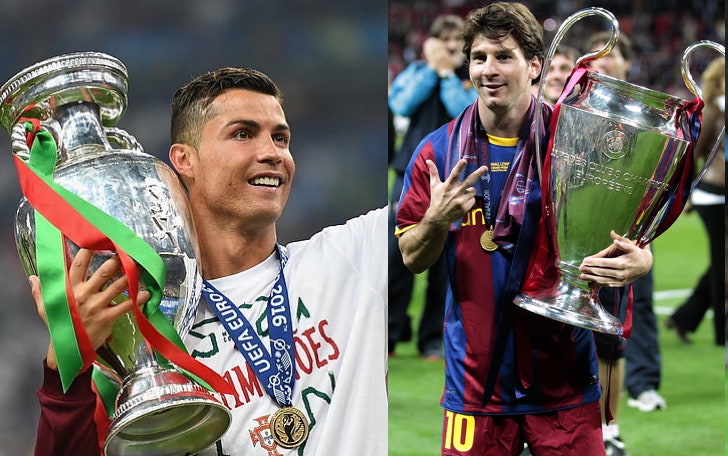 Dominic Enright and Hudaa Bax debate Cristiano Ronaldo vs Lionel Messi to see who is the best footballer of the 21st century.

Dominic: Lionel Messi. The small, Argentine magician that has pulled off more hat tricks than Derren Brown. He has certainly averaged more hat tricks per game than Ronaldo for club and country. While Ronaldo may look like the pinnacle of humanity, Messi is no human. The man is an alien of football, with no peer on earth. I will argue why he is the greatest footballer of the 21st century.

Hudaa: Cristiano Ronaldo. To the naked eye, he is a handsome sports star. To the learned eye, he is a talented, skilful, hard-working, and artistic footballer. To the scholarly eye, he is better than Messi. The list of this legend’s achievements is endless; with his highest jump recorded at 2.56m (higher than the crossbar), a total of 811 goals in 1116 appearances, and a perfect jawline, there is no comparison. I will argue why he is the greatest footballer of the 21st century.

Dominic: Lionel Messi’s stats are without comparison. In the modern era, Messi has the second highest goals per game ratio of players that have scored 25 or more in the Champions League with 0.80 and only Robert Lewandowski is higher with 0.81. While Cristiano Ronaldo is close to Messi at 0.77, Messi has recorded a higher assists per game ratio and higher overall goal contributions per minute. In fact, he has averaged a goal contribution per minute across his career of 81 mins. That is less than the length of a game. However, it is in La Liga where Messi really comes into his own. In the 9 seasons that they played in the same league, Messi won La Liga 6 times and Ronaldo only 2. Messi was also top scorer 5 times in La liga in comparison to Ronaldo’s 3. In total, Messi has won La Liga an astonishing 10 times. It is no wonder Messi has won the Ballon d’Or more times than Ronaldo, with 7 orbs and counting.

“[Messi] has averaged a goal contribution per minute across his career of 81 mins. That is less than the length of a game.”

Hudaa: From Manchester United to Real Madrid to Juventus, this hero has blessed many with his presence. His record number of goals in the Champions League will surely remain for at least a decade, since Messi is unable to reproduce his form at PSG. However, It is his success in winning the competition where Ronaldo excels. He has won 5 Champions Leagues which is more than Messi and less than only 4 teams in Europe over their whole history. Of course, Dominic will probably argue that internationally Messi has been more successful: he has won a continental cup competition, and reached a World cup final. However, Ronaldo won a continental cup too and with a much smaller nation. While Portugal have always overperformed internationally relative to their size, it is hardly a boast to succeed with Argentina who have historically been the second best team in South America.

Dominic: Although Messi has seemed superhuman, this has probably been his worst season. Whether it is that he has got older, or the limelight has been taken away by Mbappe, he couldn’t win PSG a Champions League. However, the international success last year certainly laid to rest the old argument in this debate that he can not perform for his country. However, unlike Ronaldo, he makes it into the PSG starting XI without question while Ronaldo may not even start. PSG have won their league and his addition has definitely helped. He likely has a few more years at the top of the game whereas Ronaldo feels only a few more years from an LA Galaxy or Guangzhou FC.

Hudaa: It is probably necessary to address an elephant in the room for Ronaldo as well; why are Manchester United 6th in the Premier league table if Cristiano is on the pitch? As a Manchester United supporter, I only claim to be writing an article on why Ronaldo is better than Messi, not that he is a miracle worker. Not even a god could fix Harry Maguire’s defensive failings. Yet, Cristiano has consistently kept them competitive despite their shaky back line. For example, his heroics in the group stage, twice scoring in the last minutes, got Manchester United into the knock-out stage. In comparison, Messi’s Paris Saint Germain, despite having a star-studded supporting cast, were knocked out at the same stage as United this year. Clearly, Lionel is no god either.

“As a Manchester United supporter, I only claim to be writing an article on why Ronaldo is better than Messi, not that he is a miracle worker…”

Dominic: The players’ awards and career path seem fairly equal, but the way Messi makes supporters feel, for me, puts him above Ronaldo. Whereas CR7 feels often more than just about football, Messi is for the purist. No statistic can explain the feeling of seeing Messi get the ball, turn away and cut through 7 players like he did against Getafe. While Ronaldo can probably jump higher, run faster and shoot harder, Messi glides in a similar way to Roger Federer playing tennis. He plays with the freedom of any kid in a football cage, and like any gifted year 7 playing with older boys, he cuts through men much bigger than him. It has always been an underdog story for the man who was diagnosed with growth hormone deficiency at age ten, and we are profoundly lucky for the series of events that got him into the professional game. For me, this makes him greater than Ronaldo, as proof of triumph over adversity, even if Ronaldo may have won one more Champions League.

Hudaa: The statistics and facts are endless, but you can just find them almost anywhere and everywhere on the internet. The reason as to why Ronaldo is special is because of something intangible. No, it is not the list of his famous hat tricks, and no, it is not the description of his abs either. Rather, it is about his attitude and mentality. Just at the gym, Ronaldo trains 3-4 hours a day, 5 days a week. At Juventus, he was the first to arrive at training and the last to leave. On the pitch, whether he is playing a bottom table team or a friendly, Ronaldo is hungry for the game. It is this very starvation, perseverance and effort which gives Ronaldo that extra charm when he is on the pitch. And, of course, the jawline. The CR7 brand reaches a wider audience due to this; more than 434 million follow him on Instagram as compared to Messi’s 322 million. People identify more with the hard working lad from Lisbon than the superhuman gifted with talent. That is why Ronaldo’s fanbase and legacy is deeper, and the real reason he is greater than Messi.

Statistics sourced from Messi vs Ronaldo website and FBref.com