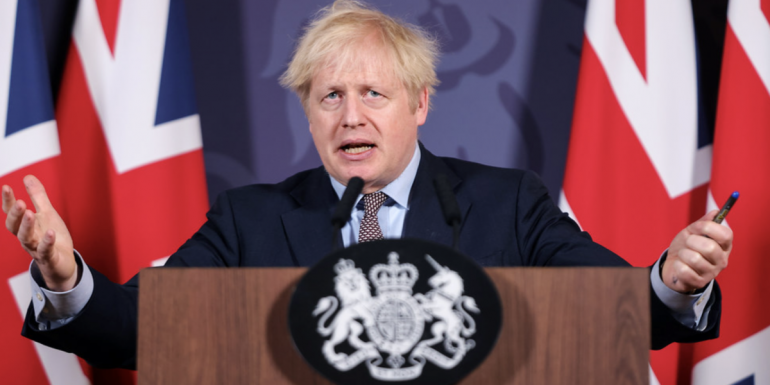 Does Johnson have to BoGo?

Before the time of the pandemic, the Russia-Ukraine conflict, and TikTok becoming a household name, there was a time when our current politics was completely focused on the phrase Brexit. After the resignation of Theresa May, a new figure called Alexander Boris de Pfeffel Johnson, or Boris as many people refer to him, was seen as a breath of fresh air during the time of the Conservative minority government and a grid-locked House of Commons. Three years later and now Boris Johnson’s past indiscretions have started to catch up with him. But how did we end up here, with Boris Johnson being the first-ever sitting Prime Minister to break the law – a law which he created? Is it time for him to move aside, admit his wrongdoings and try to remove the humiliation the Conservative Party is facing today? Or take the pressure on both sides of the House and keep calm and carry on?

To give a summary of the man living in 10 Downing Street: born in 1964, Mr Johnson went to Eton and then studied Literae Humaniores (Classics) at Balliol College, Oxford. A member of the famous Bullingdon Club and the college rugby team, he rose to become President of the Oxford Union and a co-editor of the satirical magazine Tributary. After graduating, Mr Johnson worked for The Times and The Daily Telegraph. In 2008, he was elected Mayor of London. During this time, he oversaw the famous “Boris bikes”: while a favourite for Londoners, they were a financial nightmare. In 2016, Boris campaigned heavily for the United Kingdom to leave the European Union. He famously unveiled the Brexit Bus claiming that the £350 million that we send to Brussels could be redistributed to our NHS, even if the actual truth is somewhat different. After the resignation of David Cameron, Boris became Foreign Secretary until, in 2019, after Theresa May lost the support of Tory backbenchers, Boris ran against Jeremy Hunt for the leadership of the Conservative Party. On 24th July 2019, he became the 55th Prime Minister of the United Kingdom and the 28th Prime Minister to be educated at Oxford University.

During his early months as Prime Minister, he was famous for the phrase ‘get Brexit done’ during the run-up to the 2019 general election, as the Conservative Party attempted to gain a majority in the House of Commons to force its policy during negotiations with Brussels. On 12th December, the catchphrase and promises paid off. A huge Conservative landslide allowed the party to dominate and push through any legislation needed to finalise its Brexit deal. This great achievement was a historic event as it led to the collapse of the Labour Party in the North and its infamous red wall. On top of this victory, it allowed the PM to be more aggressive whilst negotiating with Brussels, who previously kept offering a take it or leave it no-deal situation to Theresa May. Looking back at this, whether you still agree or disagree with the decision to leave, Boris Johnson and his cabinet gave us the best possible outcome.

When the United Kingdom left the European Union on the 31st January 2020, another dark cloud was forming: the first cases of Covid-19 had already spread to the British Isles. This was the PM’s greatest battle. Sure, it would be biased to claim that the Government was 100 percent effective in balancing the needs of the people, the economy, and the NHS. There were multiple missteps throughout the last two years. But there were missteps in every single country on the planet because this is a brand-new situation. However, the PM and the Chancellor started the necessary steps early. For instance, the first national lockdown from March to June helped save thousands of lives and gave the NHS enough time to prepare. This, and the Chancellor’s generous economic package, helped preserve jobs and businesses throughout the height of the pandemic – including a £70 billion furlough scheme. Looking back at this now, in 2022, we can pick (and have picked) holes in the policies implemented during the pandemic. Some claim that lockdowns lasted too long; others that they should have been announced sooner. But overall, according to the Prime Minister, we have come out of this pandemic with the fastest growing economy out of the G7 by protecting the careers of millions of workers – thanks to the Conservative Party. However, in the last couple of weeks, the PM’s words have been debunked. The UK is now forecast to be the slowest growing economy in the G7 due to the conflict happening in Ukraine.

The success of the government’s interventionist policy during the pandemic caused the Prime Minister’s approval rating to grow rapidly to 66 percent in April 2020. Sitting here, we must ask, where did it all go wrong? Emerging evidence of the PM attending parties and drinks receptions at Downing Street began to materialise and has forever tainted the reputation of the Government. Such parties include the 15th May 2020 garden party, the 14th December 2020 Downing Street Christmas party, and, most insultingly,  two parties on 16th April 2021 – the day before the funeral of Prince Philip, the Duke of Edinburgh. While all parties, regardless of their attendance or length, were illegal, and an outright slap in the face towards the British people, allowing parties the day before the funeral of the Head of State’s husband is an insult to both the Queen and her decades of unwavering service to the nation. While the PM has continued to deny these allegations, it hasn’t been enough to deceive the British public. As of two weeks ago, Boris Johnson’s approval rating has flipped, with 65 percent of people believing he isn’t doing a good job.

But does the past fix the future? With the current scandal faced by the Prime Minister and his cabinet, is it possible for the British people to forgive but not forget? The short answer is no. A recent poll shows that around 54 percent of people believe the PM should resign, compared to 29 percent believing he should continue. Within the halls of Westminster, an inquiry has been set up by the Privileges Committee, led by Labour MP Chris Bryant (who has recused himself). This will investigate him on the grounds that he allegedly misled Parliament. Under the Ministerial Code, ministers who wilfully mislead the House of Commons are expected to resign. This isn’t the first time Boris Johnson has been accused of misleading members of our government. Back in 2019, the PM attempted to prorogue Parliament in a bid to stop any further derailing of his Brexit deal, but this was stopped. According to the Scottish court, the PM purposely misled the Queen to suspend Parliament. After an appeal to the Supreme Court, Parliament was recalled.

So what’s next? There are three possible outcomes for the future of Boris Johnson. Firstly, if the Privileges Committee finds the PM guilty of misleading Parliament, he would likely have to go and an immediate Conservative leadership election would take place. Some of the top running candidates are Ben Wallace MP, the Defence Secretary, and Liz Truss MP, the Foreign Secretary. A second outcome is that Boris Johnson is not found guilty, but decides to step down due to the ever-growing lack of confidence by backbenchers in his ability to lead. Thirdly, having not been found guilty, he remains as PM and keeps his backbenchers in line. However, with the upcoming general election in 2024, this could cause a devastating effect for the Conservative Party, as the anger of the British people is expressed via a tiny piece of paper in a box. Deliberating on the possible outcomes the PM could face, it seems that for the good of his country, his party, and his reputation, Boris Johnson should continue in his position until the verdict from the Privileges Committee is given to the Speaker of the House.