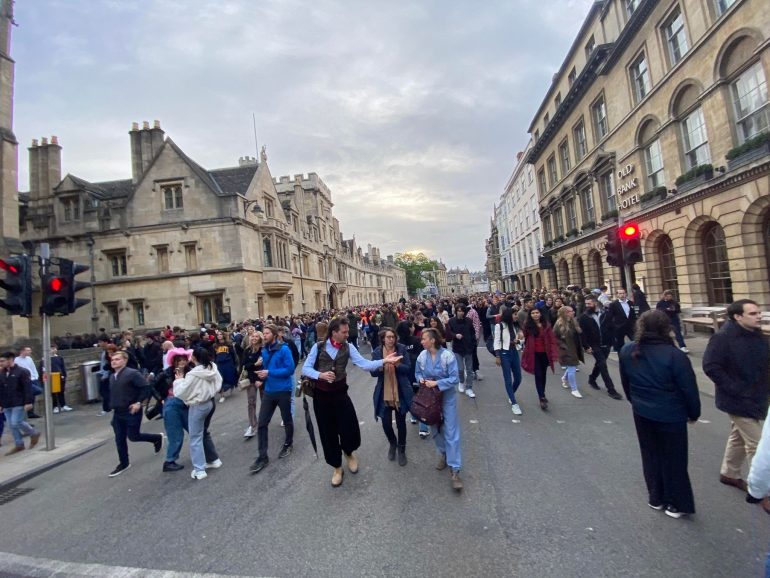 May Day: A Tale of Two Sides from Magdalen College

Kesaia Toganivalu and Dominic Enright provide accounts of their long-awaited "May Day experiences".

I, like many other people who have studied at Oxford for the last three years have never experienced a May Day Morning. It is also crucial to say at this point I still have not. I fell victim to something Fresher Kesaia was also guilty of: not pacing myself.

As a member of Magdalen College, I was invited to the Oscar Wilde Party, an event where first years, finalists, and porters could attend. Unlike the other events happening on the night, such as The Lady Margaret Hall Ball, this one was free. In truth, I was surprised by the invitation, when it initially appeared in my Outlook inbox and was expecting something akin to canapes in the auditorium. I did not even associate the date with May Day. 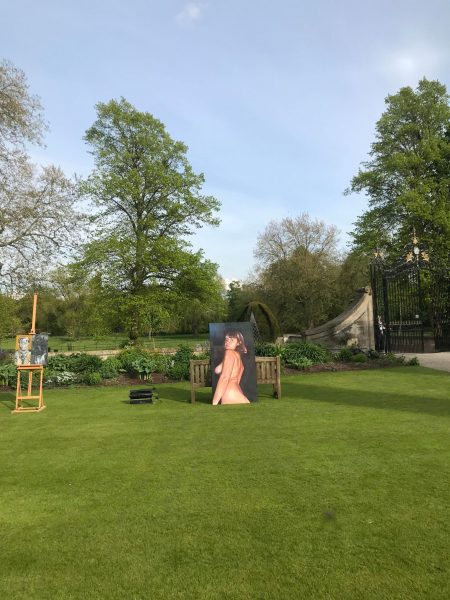 Image Description: Self-portrait by Sophia Hambleton-Grey, on display at the Oscar Wilde Party

The evening started at 6 p.m. and was definitely not just canapes in the auditorium. The entire New Building’s lawn had been transformed with a large white marquee and food and drink trucks spotted around the perimeter. Champagne was being served throughout, with an open bar and Jericho Coffee Traders providing espresso martinis. “This is just like a ball!” One of my friends commented, and it really did feel like one. And it was even better knowing we hadn’t compromised our maintenance loans to be able to attend it.

The tradition of May Morning is that one must stay up all night to listen to the choir sing at sunrise at the bottom of Magdalen Tower. At the beginning of the night, I had boasted that “Yes, you’ll see me there” and no, “I won’t fall asleep this time”. Famously, last year I had stayed up until 4 a.m. and sworn I would be awake for 6 a.m. to observe it in a COVID-compliant manner in college. Readers, I took a nap and woke up at 12 in the afternoon on 1st May 2021. 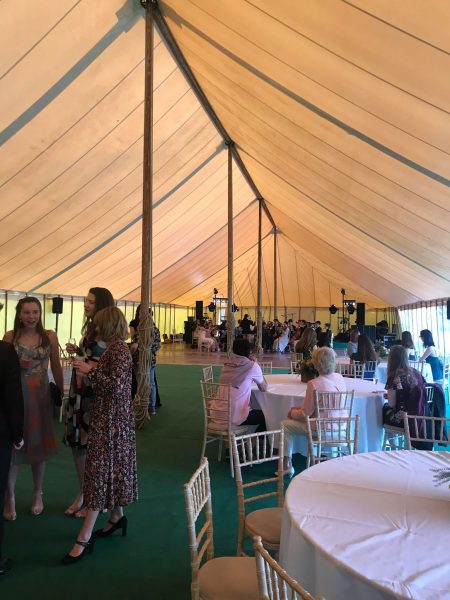 Suffice to say, I took my chances and chose to appreciate as much as the Oscar Wilde Party had to offer. This included bumping into an old Cabinet Minister who was constantly being swarmed by students looking for internships, and a fever-dream-like memory of dancing with the President. I did not make it to May Morning, but my friend Brandon Abreu Smith did.

“The streets were completely full of people, from kids, students to parents” He told The Oxford Student, “Honestly, [it] felt great. Like we were all part of some big community, lots of music being played and people dancing, a lot of drunk people too!” You will have to take his word for what it was like in the outside world. I, like many students who say “forget tradition, I’ll answer for these shots in the morning” was asleep at 6 a.m. on 1st May 2022.

Whilst Kesaia and all of Magdalen were privy to a sophisticated (or maybe not so much) evening of Wildeian garden parties, the vast majority of us had to find other ways to pass the time until the long-awaited 6 a.m. chime from Magdalen tower. Senior News Editor Dominic Enright found himself in this exact predicament. And, like Kesaia, this was his first May Morning despite being a third year.

This was my first May day experience, and hopefully the last of its kind.

My May Day plan and my May Day did not align, as although I had Plush tickets until late into the morning, I spent most of the night helping my friends who had been incapacitated through injuries. To be sure, in both scenarios I would have stayed up until the early hours, but the lack of Red Bull and Jägermeister coursing through my veins made my sleep deprivation particularly pronounced and I entered a state of delirium by 4:30 a.m. Nevertheless, as 5 o’clock came, I made a slumber trek down to Magdalen bridge where crowds had already gathered. 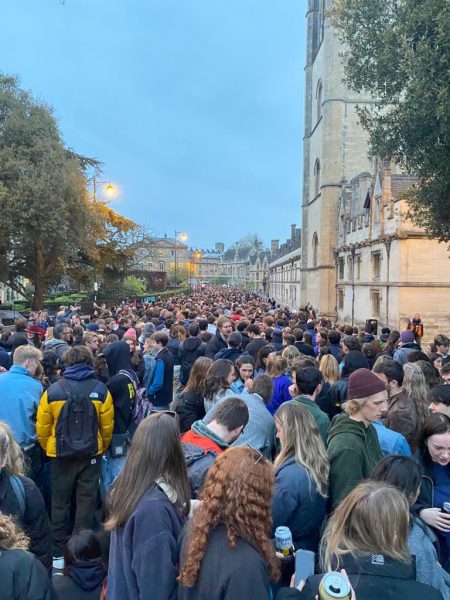 Spaces were hard to find on the bridge apart from (weirdly enough) by the Magdalen chapel where my friends and I decided to sit and wait. As anticipation built we heard various cheers from the crowds from either side of us as the choir got up to the top. It was then that we realised our mistake. Firstly, We could not see the choir which I believe is one of the central draws for people coming along. Secondly, one would think that being so close then would have meant the sound would have been clearer to us, but rather than an angelic paean to start the morning, the people next to the chapel were treated to the sound of every muffle and their ears being blasted when they did begin to sing. While in the era before digital audio technology, we would have been perfectly placed; Now the microphones had been placed so close to the bottom of the chapel that you couldn’t hear yourself think. 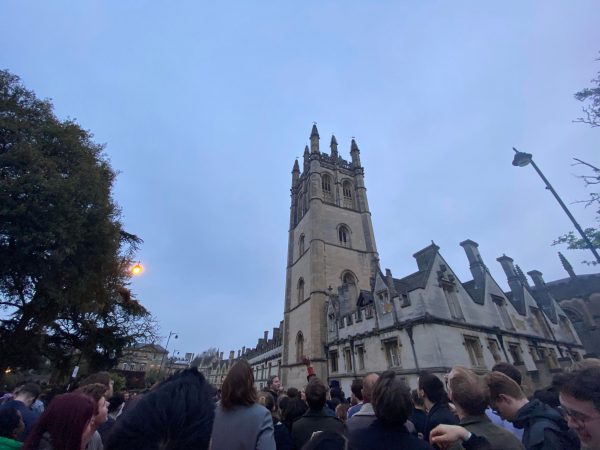 We left afterwards for Christ Church Meadow, intending to bathe in the May morning dew. However, our plans were scuppered by the lack of rain in April. While rubbing myself in dry grass and mud half-asleep, I decided that perhaps next year, I might just get an early night and resist the pressure of medieval traditions.

Image Description: a large crowd walking down Oxford High Street away from Magdalen