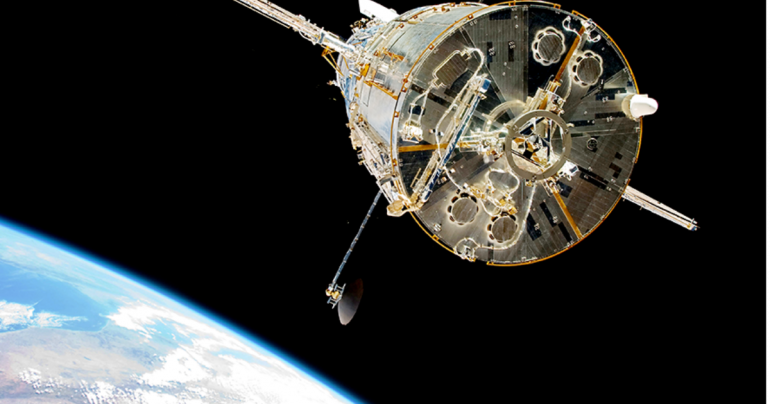 Through the looking glass: the Hubble Space Telescope at 32

The Hubble Space Telescope (HST), launched on April 25th, 1990, revolutionised astronomy, facilitating discoveries such as supermassive black holes and documenting celestial bodies at all points in their dramatic life cycles. The HST has also been instrumental in studies of dark matter and dark energy, which together are thought to make up to 70% of the mass in the known universe and yet remain puzzling to scientists. Its impact on modern astrophysics cannot be overstated.

The most recent discovery marks the telescope’s 32nd birthday: Hickson Compact Group 40 (HCG 40), a group of five galaxies densely packed together which will go on, in about one million years, to form a new, larger galaxy. What makes HCG 40 quite remarkable is its density and diversity, with three spiral galaxies, an elliptical galaxy, and a lenticular (lens-shaped) galaxy all packed into a space less than twice the size of our own Milky Way.

Studying such groups gives astrophysicists an insight into how the universe might have looked in its early stages and hints at the origins of the well-established galaxies we see in our skies today. The most popular theory of the mechanism behind these galaxies merging involves dark matter in an intrinsic way, wherein galaxies orbit in a large cloud of their surrounding dark matter and slow down due to its gravitational effects. Eventually, the galaxies become too slow to remain separate, collide into each other, and merge.

Although it happens over an extremely long timescale (in human terms), there are vast amounts of energy involved in galaxy merging events such as that hinted in HCG 40. This is why astronomers believe that many more such groups may have been present in the early universe, where their hot, dense material may have served as fuel for highly energetic black holes, called quasars.

What makes HCG 40 quite remarkable is its density and diversity

The HST makes observations not only in the visible light spectrum, but also in regions of infrared, radio and X-ray wavelengths. As such, its capabilities far outstrip the human eye or optical telescopes, and this is what has made it so effective in astronomy research. Additionally, being in orbit around the Earth, it is unaffected by atmospheric distortions, ensuring it can reliably look into the universe in detail. X-ray observations of HCG 40 (impossible to make from Earth’s surface) have demonstrated that the galaxies are interacting gravitationally, and that there is a compact radio source at the centre. This agrees with observations made at infrared and radio wavelengths which may point to supermassive black holes – it is quite clear that in one dense group of galaxies there is a lot of physics to be unpicked.

The photograph shared from the HST is recent, but scientists have known about HCG 40 since 1966. This goes to show how developments in technology allow scientists to dig deeper, and in doing so glean richer conclusions from data they already have. This is also true for the HST in general: one of the keys to its success is its regular servicing, with state-of-the-art instruments being added on a rolling basis throughout its lifetime. That said, the lifetime of the HST is finite, and it is expected to re-enter our atmosphere sometime between 2028 and 2040.

The 50 thousand strong bank of images taken by the HST is soon to be complemented by those from the James Webb Space Telescope (JWST), which is due to begin observations this summer. The JSWT was launched on 25th December 2021 and is stationary in space about 1.5 million kilometres from Earth. Designed to photograph celestial bodies which are too distant, hot or faint for the HST to detect, the JWST may take astronomers one step further towards answering some fundamental questions about the universe.