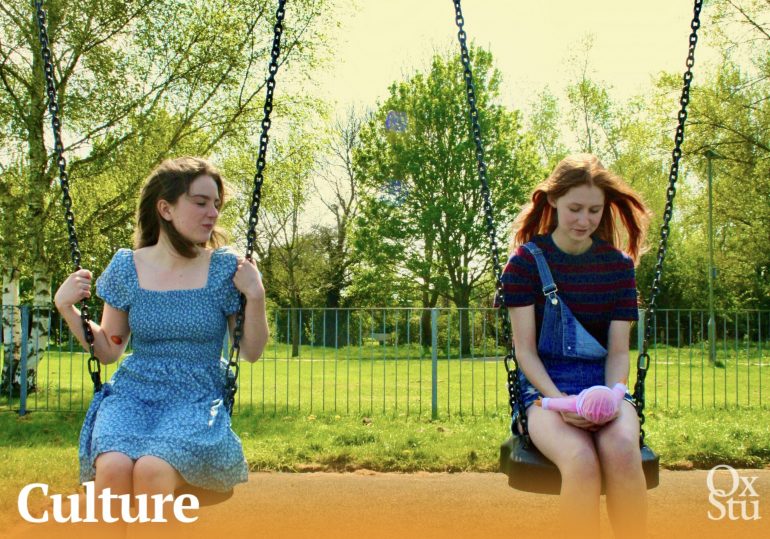 Image Description: a promotional photo for Girls and Dolls.

Given the ubiquity of Derry Girls at the moment, it is shrewd of A2 Productions to capitalise on this by staging a short play by its writer, Lisa McGee. Like Derry Girls, Girls and Dolls is set in Ireland and focuses on the friendship of Emma and Clare, looking back on their early youth and how Clare’s growing obsession with one of their neighbours, and her baby, spirals into a dark and disturbing incident.

It should be noted that the ‘dark’ element of the ‘dark comedy’ subtitle running on posters for this play should not be taken too lightly, and that it features references to sexual assault and some disturbing scenes. However, the jarring combination of McGee’s whip-smart aptitude for comedy and the increasingly unsettling path of the storyline works to excellent effect.

“OUDS generally has a reputation for being cliquey and elitist, and it was refreshing to see some novices be given a chance and acquit themselves as professionals.”

With writing so good, in many ways the direction doesn’t need to be too inventive in order to make it pop. Brechtian elements, such as the use of simple sets and stock props to denote different characters, mean that the most is made of the 2 actors on the stage at any given time. One of the most memorable scenes in terms of production was when Clare approached her father to say good night, and the use of lighting and voiceover created a genuinely unsettling and ominous atmosphere that had my skin crawling. At times I would have liked to have seen the actors pushed more in their physicality in order to better denote when they changed roles, but this is a small objection.

For it is the actors themselves that really make this show, and indeed they have to with no one else supporting them on stage for 75 minutes. Emma Haran is fantastic as, well, Emma, bringing a childish energy that contrasts well against Sylvie Leggatt as Clare, who also clocks in a great performance especially in Clare’s more unhinged moments. They switch effortlessly between playing old ladies, schoolteachers, schoolboys, and middle-aged parents.The Irish accents did not slip once, and it is hard to believe that neither of them have ever had a part in Oxford drama before.

This is the final thing for which I must commend the show: everyone involved in its production was completely new to their role and had never been involved in an OUDS play before this. OUDS generally has a reputation for being cliquey and elitist, and it was refreshing to see some novices be given a chance and acquit themselves as professionals. Hopefully, this will encourage other productions to be more active in their casting, rather than relying on the same old faces and turning their noses up at people who just want to have a go.

Overall, Girls and Dolls receives a well-deserved recommendation from me. Funny and unsettling in equal measure, the production will stay with you long after the house lights come up.

Girls and Dolls is showing at the Burton Taylor Studio every night at 7.30pm until Saturday 14th May. You can purchase a ticket for the remaining four nights here.