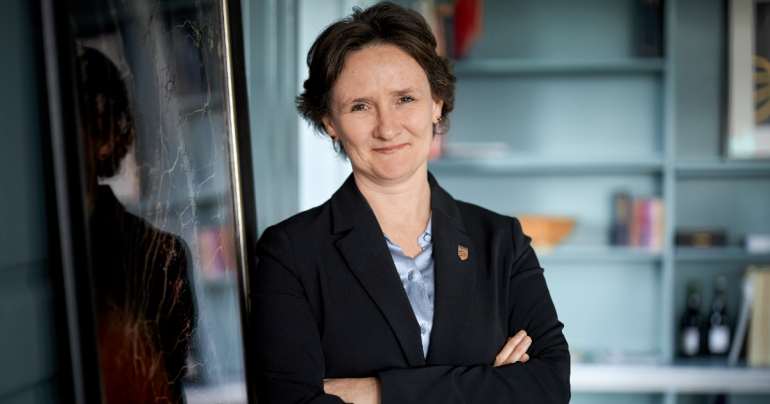 Professor Irene Tracey nominated as next University of Oxford Vice-Chancellor

A renowned neuroscientist, Professor Tracey has led Merton College since 2019 and is now the Professor of Anaesthetic Neuroscience in the Nuffield Department of Clinical Neurosciences, a department she led for several years whilst serving as Statutory Chair. She is also President-elect of the Federation of European Neuroscience Societies (FENS).

Professor Tracey completed her undergraduate degree and doctorate at Merton College, Oxford in biochemistry; her doctoral work focused on early use of magnetic resonance imaging methods to study disease mechanisms in humans under the supervision of Professor Sir George Radda.

She then held a postdoctoral position at Harvard Medical School, working at the Martinos Centre for Biomedical Imaging, before returning to Oxford in 1997, when she became a founding member and then Director for ten years of the world-leading institution now known as the Wellcome Centre for Integrative Neuroimaging.

The Vice-Chancellor is Oxford University’s senior officer, responsible for the strategic direction and leadership of the world’s top-ranked university. Professor Tracey’s nomination has been approved by the University’s Council and is now subject to approval by Congregation, the University’s sovereign body.

The Nominating Committee was chaired by the University’s Chancellor, The Lord Patten of Barnes, and included members from across the collegiate University. They were joined for the first time by representatives of the student body and the early career researcher community.

On her appointment, Professor Irene Tracy said, “I am honoured to be nominated as the University of Oxford’s next Vice-Chancellor, and I wish to thank my colleagues for entrusting me to lead such a magnificent and world-leading academic institution.

The last few years have reminded us all of the crucial role Oxford, along with other leading British universities, plays in tackling global societal issues.

That is why I am deeply committed to growing Oxford’s impact through supporting its groundbreaking discovery research, its excellence in teaching and its drive to create a global innovation powerhouse.

“The University has also made significant strides in recent years to becoming a more diverse community. Coming to Oxford University from a terrific local school, Gosford Hill, I know well the transformative power that great teachers, professors and a good education can have throughout one’s career; Oxford’s commitment to attracting the very best students from whatever their background will remain steadfast.

I am delighted that from next year, having already been an academic leader and college head at Oxford, I will have the chance to further give back to a university that I ardently believe in, and to my home city that I dearly love. I am also proud that I will be passed the leadership baton by Oxford’s first female Vice-Chancellor, Professor Louise Richardson, whose outstanding legacy will be built upon in the years to come.”

The Chancellor of Oxford University, Lord Patten of Barnes, who chaired the Nominating Committee, said, “Irene Tracey was born in Oxford and educated at a local comprehensive and Oxford University, for which she has now been proposed as the next Vice-Chancellor.

It is an extraordinary story of personal achievement, social mobility and academic excellence.

I doubt whether anyone knows more about the University and all its aspects than today’s Warden of Merton. She also, as an internationally recognised scientist, has considerable experience at home and abroad. I am sure she will build successfully on the outstanding achievements of Louise Richardson and lead Oxford in coping with the big challenges which lie ahead.”

The current Vice-Chancellor of Oxford University, Professor Louise Richardson, said, “I am delighted by the nomination of Professor Irene Tracey, who will bring deep-seated familiarity with the collegiate university as well as enthusiasm for its values, to the role of Vice-Chancellor. Irene’s talents, collegiality and boundless energy will stand her in good stead. I wish her every success and I will do all I can to ensure a smooth transition.”

The current Oxford Student Union President Anvee Bhutani and VP Graduates Devika, who were also part of the nominations committee, said on the appointment: “We are so happy to announce the nomination of Professor Irene Tracey CBE FMedSci as the next Vice-Chancellor of the University of Oxford. Both of us have sat on the Vice Chancellor Nominations Committee for nearly a year now and we’re so pleased that we were able to help decide on a woman who’s incredibly progressive and whose story of going from a state comprehensive school in Oxford to Warden of Merton College is very inspiring.”