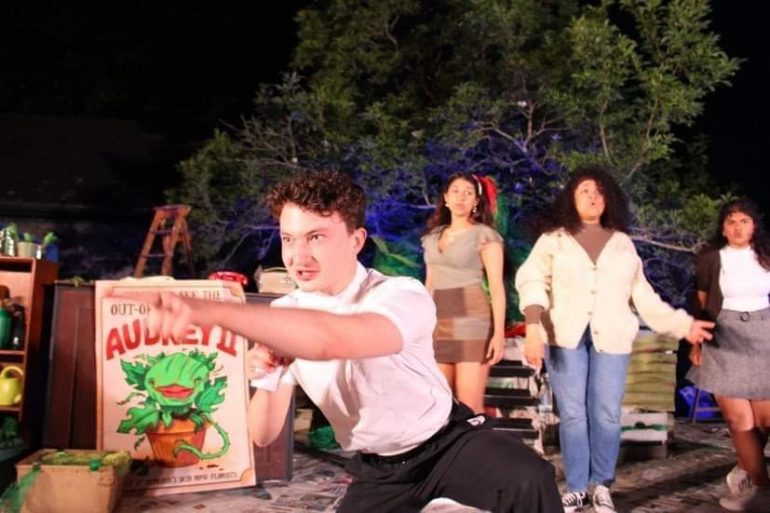 The Eglesfield Music Society’s rendition of Ashman and Menken’s Little Shop of Horrors is wall-to-wall delights. A heartwarming thrill ride of laughs, chills, and charm in the picture-perfect outdoor surroundings of the Queen’s College Garden – even a day on, I can’t keep the smile off my face.

The set is nothing overly audacious: two wooden boxes form the shop counter of Mushnik’s Skid Row Florists and raised platforms at the back and front stage left provide a variety which the show utilises throughout. The newspapers strewn across the floor give a sense of clutter to the down-and-out Skid Row scene, layered ironically on top of the balustrade of All Souls College illuminated in the evening sun and drenched in privilege. The irony is never addressed, but it stays on the tasteful side of uncomfortable. An opportunity missed though, as the ‘big city’ creeps into the plot as the play progresses; more could be made of the organic conflict before the audience’s eyes.

The show opens with the title track, a playful, upbeat tune played expertly by the musical ensemble led by Isaac Adni on keys. Blaring brass overlays bass and electric guitar, all buoyed up and tied together by the percussion. The band drives the mood for most of the show, accompanying, rearing its head to make a statement at moments but never dominating. Adni’s note-perfect virtuosity is complemented delightfully by jazzy licks by Nicole Tay on a second keyboard. Why not. The band sounds as a unit in perfect harmony and makes light work of the potential issues posed by the outdoor venue.

The band drives the mood for most of the show, accompanying, rearing its head to make a statement at moments but never dominating.

The trio of Crystal, Chiffron and Ronnette form the chorus of sorts, and it is they that sing the title track of the production. They coped well with the odd opening night fumble on the sound desk and their impressive vocals started well and only improved. They set the tone, quite literally, for the strongest vocal performance in any ‘amateur’ musical theatre that I have seen. The Queen’s College Choir is renowned across Oxford and beyond, so any show put on by the EMS commands high expectations from the voices (although the cast and technical team by no means consisted exclusively of Queen’s students). Those expectations were blown away.

The male lead is Seymour Krelborn, a gawky, stuttering, and well-meaning florist’s assistant, played masterfully by Cormac Diamond. His heart-melting singing voice couples with an unerring New York accent, full of all the diffident charm the role demands. His first solo number, ‘Grow For Me’, is a touching ballad between Diamond and a small, sickly pot plant, and his performance is charming, endearing, and note-perfect.

His colleague and crush Audrey is a self-effacing sweetheart with an abusive boyfriend and chequered past, played by Eva Bailey. The character has a number of difficult musical numbers, technically difficult and highly emotionally charged, and Bailey takes them on and makes them her own. Her voice is head-turning and show-stopping; ‘Somewhere That’s Green’, Audrey’s first solo, sends chills around the audience, and not just because of the crisp English May evening. The duet, ‘Suddenly Seymour’, later sees these two brilliant voices combine over the delicate and soulful backing of the band. It’s enough to make the heart grow.

Her voice is head-turning and show-stopping…

And late on in the first half comes the moment that we’ve all been waiting for: the first words of the man-eating plant, Audrey II. And boy, is it worth the wait. Jelani Munroe appears from inside the giant flytrap to produce a rendition of ‘Feed Me’ dripping with smooth-talking sex appeal, and the plant can’t half sing, too. With an expressive and impressive vocal range, Munroe is the centre of the show for the subsequent hour as Audrey II’s presence hangs in the air with delightfully poised creepy, camp tragicomedy. The sight of Monroe in knee-high red leather boots with her back turned during ‘The Meek Shall Inherit’ as a symbol of Seymour’s conscience is harrowing, and the grisly growl of ‘Suppertime’ is both frightening and hilarious. The plant dress completes the picture and Munroe’s take on the emotional climax (for want of a better word…) of the show is horrifically, erotically laugh-out-loud. Played to perfection. 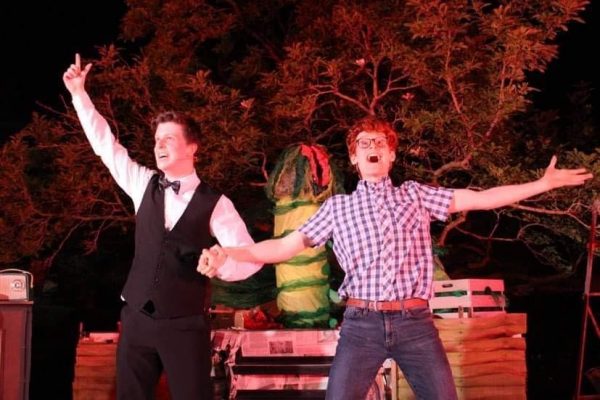 To my absolute glee, Declan Ryder and Cormac Diamond do justice and more to the show’s best song, ‘Mushnik and Son’, with a tango at the end to boot, while Alfred Dry takes on the role of sadistic and abusive dentist Orin Scrivello. Dry was well up to the difficult role and played the maddened, piercing eyes of the unhinged dental surgeon to delightful excess. The quality of the vocals across the board makes Dry’s missed notes stick out somewhat, but he makes up for it in with a lively acting performance.

The show takes full advantage of the lighting opportunities, as the dusky sunshine gives way to brisk spring night-time during the interval. The second half sees the excellent light set-up in use to drench the stage in red, green or bright white at opportune moments. The death sequences are steered by the lighting and the set brings the trees behind the stage into the frame using lighting to imposing effect.

Tickets for Little Shop of Horrors by the Eglesfield Music Society can be purchased using the link below.