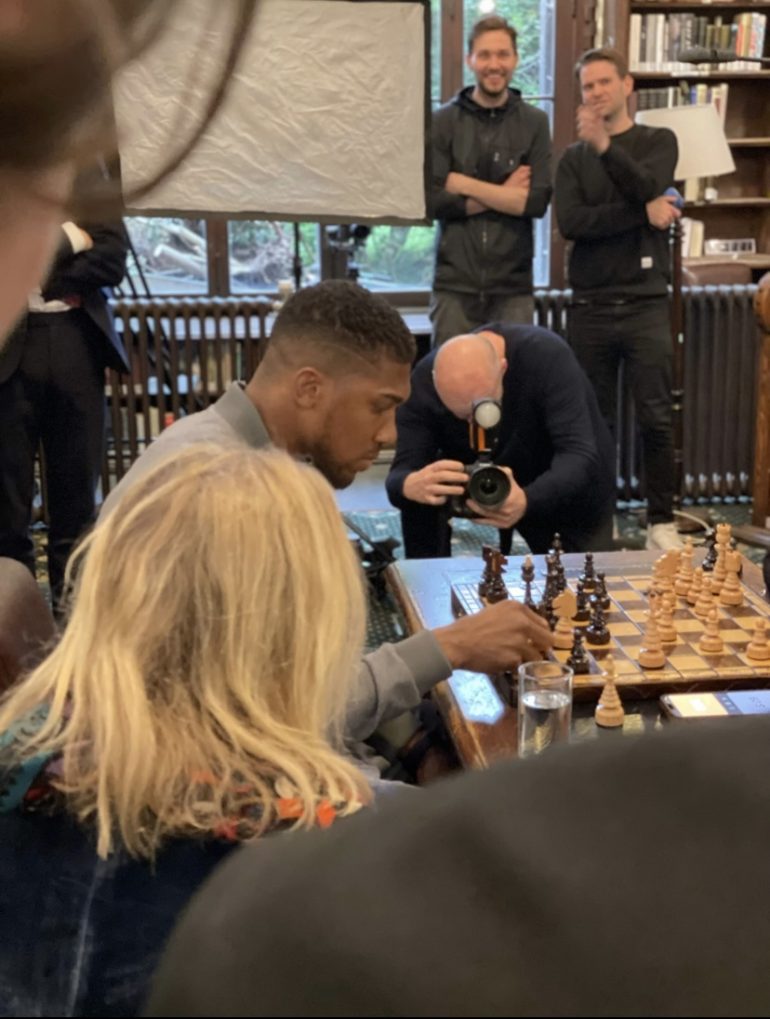 A Visit from Anthony Joshua

A figure to rival the photos on the wall of the Union had the whole of the premises in anticipation. We were waiting in unison in an eager line full of hacks and journo-hacks, as soon as this 6’6” god entered the room. Before the interview commenced Anthony wanted to fight a foe in a different arena, chess. That a man that boxed would also play chess may seem odd to the no-context viewer, but his story is as heart-warming as could be. As Anthony said himself, his niece taught him to play and has currently played for 4 years now. The first joust he offered was to say “I’m out of my comfort zone, I just want to have some fun here.”

The man clearly values education, throughout his visit he wanted to learn from us! Why he would want to learn from oxford students I have no clue. Anthony was playing against a 3 time Chess winner, the guy has confidence to say the least. His fight against the slick champion from Oxford came to an eventual knockout, but he expected this of course.  Anthony was here to make friends and learn, not to chat trash and act his ego. After the match AJ, as all the adoring fans at the Union started to call him, shook the winner’s hand and proceeded to the chamber having firmly established he was here to relax and learn, not to box and battle.

Thunderous applause greeted him as he entered the chamber and sat down comfortable as usual. Questioned first about how he got into boxing, he brought up his cousin, having watched boxing from the side of the ring he ‘thought I could do this’. Alongside this he started watching documentaries about people changing their lives for better through sport, an ideal he wanted to emulate- towards reading, not raving. Having left education to make money, he was asked whether he would advocate boxing over education, he said ‘a smart person makes a smart boxer’, you need education for boxing, you need the ability to predict and research outcomes.

‘a smart person makes a smart boxer’, you need education for boxing, you need the ability to predict and research outcomes

Having settled the audience with the basis of his life, he took a lead hook to his idols. AJ looks up to ‘Alpha males’, conquerors from ‘back in the day’. Mindset to him is key, we should avoid distractions like nightclubs and instead focus, something his boarding school experience in Nigeria taught him. ‘Discipline is key’. For him discipline is not just his routine, but his set of values. Respecting elders, pleases and thank you’s, remembering your ancestors.   But even the little things, he values sleep and being involved in the community, being the ‘big man’ as such. Thus, his idol in his remit was Klitschko,  who he admits to be his hardest fight, but also a man that understands responsibility. Klitschko is admired for speaking multiple languages, wearing suits, and understands the value of respectability.

Another common theme of AJ has and is that he wants to show is respect. Asked about his future? He is looking to get his fingers in many pies. Pointing at the audience he asks for any ideas, God knows why he would ask Oxford students. Yet once again thinking in his boxing mindset of wanting to think smart and long-term and be a cornerstone in his community. He remarks he sees notable other athletes who turned to drugs after retiring and finds that pitiful. Instead, he is looking to have his name in the newspaper for good things like investing and setting up businesses. Respect for him is not just pummelling opponents, but also ensuring grace outside of the ring.

Respect for him is not just pummelling opponents, but also ensuring grace outside of the ring.

The talk throughout noticeably lacks any direct talk on his current fights (only vaguely mentioning his new gameplan for the next fight, that will be more tactical and on his ‘raw ability’), for that he saves the audience on the side of the ring as we learn who is AJ.  Even to mental health, a topic often hidden by boxers, he admits growing up in an African household he felt he had to hide things more. But he admits it is better to get things of your chest. Dealing with criticism, as he said, is by finding the balance. Critics are not all equal, do not take this personally, and at the same time don’t take criticism that isn’t constructive, ‘your mind is your own critic.’ As such to follow gently on, the succinct interviewer asks, ‘what are you not good at’. His answer, he needs to become more selfish, despite earlier admitting money is his central goal, he thinks he is still a people-pleaser in the sense of not choosing his own priorities and taking time for himself. Rather, he helps ‘build the empires that surround him’, that surround the brand of AJ.

Despite wanting us to hide it, his favourite song is Whitney Houston’s ‘Greatest Love of All’. Does this typify his boxing style? His emotional rollercoaster of a story throughout the talk? Or does it just show the man as what he wants to be, comfortable.

Asked about how it felt to host the illustrious boxer, the Union had this to comment:  “Yesterday the Oxford Union was delighted to sit down for an interview with former two-time unified Heavy Weight Champion of the World, Anthony Joshua. He was down to earth with his charismatic interaction with members, and gave an enlightening talk to about his inspirations and motivations, lessons growing up, his heritage and his love of another sport – chess. Indeed, before the interview he played a match against one of our members, herself a former three-time British Women’s Chess Champion and Fide Master (FM). As a care-leaver himself, the Union President, Michael-Akolade Ayodeji, felt particularly inspired by Joshua’s talk on not letting present circumstances dictate one’s destination in life, and thoroughly enjoyed Mr Joshua educating the Union members from a different, but fascinating, perspective.”