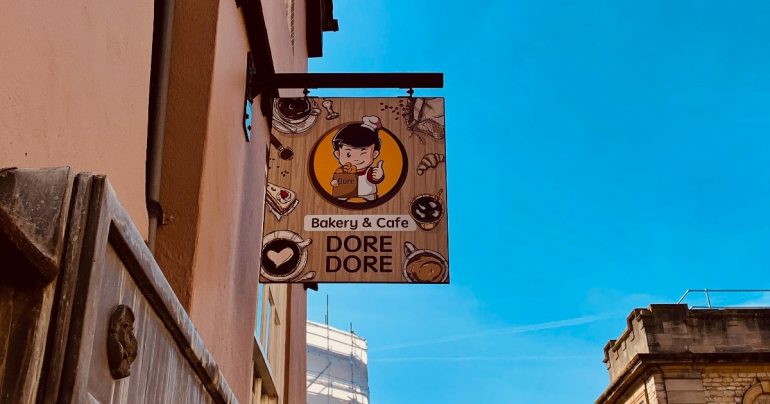 It is easy to miss: a little bakery café in a modest building on New Inn Hall Street, with a plaintive sign showing a smiling chibi-style baker. Despite living just round the corner, I only spotted Dore Dore at the end of Hilary term and, one sunny morning, decided to give it a go.

The atmosphere is cosy and relaxed, helped by the old-fashioned house with its wood beams, as well as various sofa chairs arranged in a homely manner. I was surprised to find that it also had upstairs seating, and was charmed by the whimsical décor, with cheerful pictures, cute wall decals, and a shelf of books to browse. I especially liked the series of kawaii animal designs – rabbit, bear, cat – along the staircase, which leant a friendly playfulness to its air. Though the café is two minutes away from the bustling environs of Westgate shopping centre, it is peaceful enough to suggest a nice studying space, and indeed there were already several students tapping away on their laptops when I arrived.

The atmosphere is cosy and relaxed…

Dore Dore specialises in Chinese and Japanese desserts, particularly celebration cakes, several elaborate models of which are featured in the small display window; such cakes are lighter and softer than their English counterparts, and tend to favour cream rather than icing. Themed birthday cakes are a popular choice, with examples including Harry Potter and Pikachu, often embellished with vibrant fruit.

But they also offer a variety of treats, such as mochi, red bean buns, and tiger rolls, in addition to a breakfast selection of salads and sandwiches. I was very tempted by their coconut bunnies – they looked so sweet (in both senses!) with their delicate pink noses and pensive expressions, almost too adorable to eat.

I opted for a mocha coffee (£2.80) and a Japanese cheesecake (£3.00). They have the option to add special latte art for an extra 80p; you can show them a photo from your phone and they will magically transpose this to your coffee. For now, though, I enjoyed my mocha – it cannot beat the likes of Jericho Coffee Traders, but was lovely all the same. The slice of cheesecake however was a bit underwhelming. I have read other positive reviews, so perhaps I happened to get an odd one out: it seemed too thick, unlike the airy, soufflé-like texture which such cheesecakes ought to have. They should be wobbly and fluffy but mine was distinctly un-jiggly.

On the other hand, the wife cake (£1.60) with its sweet and chewy filling was delicious. I think they are also called sweetheart cakes, and there are various stories about its origins, usually involving a poor but devoted couple trying to stay together. It’s really more like a pie than a cake, this kind of flaky pastry (also found in mooncakes and sun cakes) is a great favourite of mine, and Dore Dore’s did not disappoint. They’ve added a hint of coconut in the candied winter-melon paste, giving it extra flavour, while the pastry was baked to a beautiful golden colour and sprinkled with sesame seeds.

I would have liked to see more vegetarian and vegan savoury options; they had some gorgeous-looking buns just out of the oven, but they contained chicken or pork. And the wonderful fragrance of bakery cafés – the warm smell of fresh bread mixed with the subtle aroma of roasted coffee – was for the most part curiously faint. Still, the variety of desserts to choose from is wonderful, and offers a change from most eateries in Oxford.

As an independent café that opened just before lockdown and managed to survive the pandemic, I admire the evident love and care taken in its creation, and will be back again. The prices are reasonable, the space comfortable, and the food seems tasty. Each baked good has been individually wrapped since to help stay safe post-pandemic. Perhaps next time I will try one of their lattes, if only for the fun of seeing a picture of my dog appear in coffee, and to study while enjoying strawberry mochi and chocolate cake.