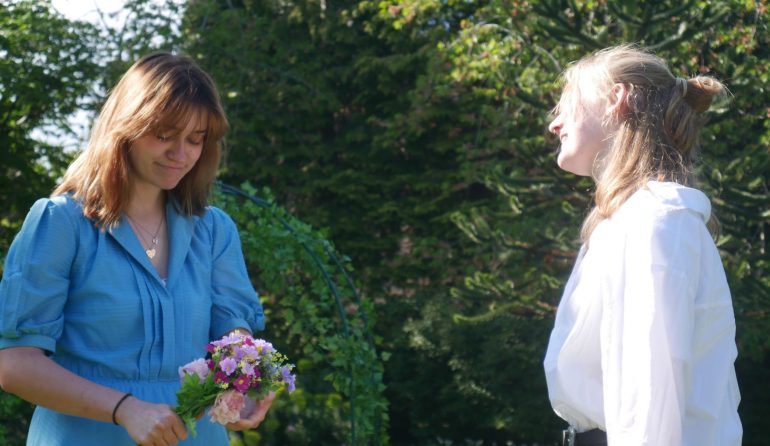 Much Ado About Nothing

Much Ado About Nothing, Shakespeare’s classic comedy of love and trickery, made a fantastic debut this week in the beautiful setting of the gardens at Wadham. The backdrop only grew more characterful as the night went on; unhampered by a minimal set, the sunset meant the actors were lit by nothing but the lights on stage.

The scenery alone made the opening night performance special, but what really animated the show was an excellent set of actors who gave their all to their performances and were evidently having fun as they did so. Everyone managed to get their tongues around Shakespeare’s knotty verses and deliver their lines with a verve that brought the dialogue to life, creating an irresistibly sparky interplay between the characters.

I wish I could shout out every single member of the cast for their thoughtful and engaging performances, but the review would quickly become a boring list of rhapsodic praise, so I will limit myself to commending the three leading players. Jules Upson delivers a highly amusing performance as Claudio, with perfect comedic timing and a sense of melodrama that prevents his character from becoming too unlikable in the second half. He threw himself into every scene with admirable energy, even during the ‘Dancing Queen’ sequence, where others were more hesitant in their performance. Yes, this production has ABBA in it too – what’s not to like?

Benedick and Beatrice were also played to perfection by Ailbhe Sweeney and Vicky Stone respectively. Both leaned into the silliness of their subplot, the comedy of their interactions heightened by their masterful delivery. In her monologues, Sweeney was able to express more vulnerability and engage the audience even when alone on stage. Her standout moment of the night, however, was unquestionably her wrestling with a bucket and a stuffed cat. (I can’t explain more than this, but it was really funny.)

If I were to criticise the show on any level, it would be for some occasionally static staging that Shakespeare performances often fall victim to. Admittedly, it’s hard to make blocking exciting when many scenes involve characters just talking to each other, but were it not for the ability of the cast to breathe life into the dialogue, this could have become dull. Alison Hall’s direction was at its best when movement became more dynamic, for example in the scenes in which the characters are trying to trick Benedick and Beatrice into thinking the other is in love with them. Innovative use of sheets, and the aforementioned bucket and cat, took the hilarity of the scene to new levels, with slapstick physical theatre gamely employed by the actors to maximum efficacy.

Overall, this was a highly enjoyable production that could be enjoyed by anyone, Shakespeare enthusiast or no. Just remember to bring a jumper (I learnt the hard way that gardens aren’t too warm after 9pm, even in British ‘summer time’).

Image Description: two characters (Beatrice and Benedick) face each other, one of them holding a bunch of flowers.