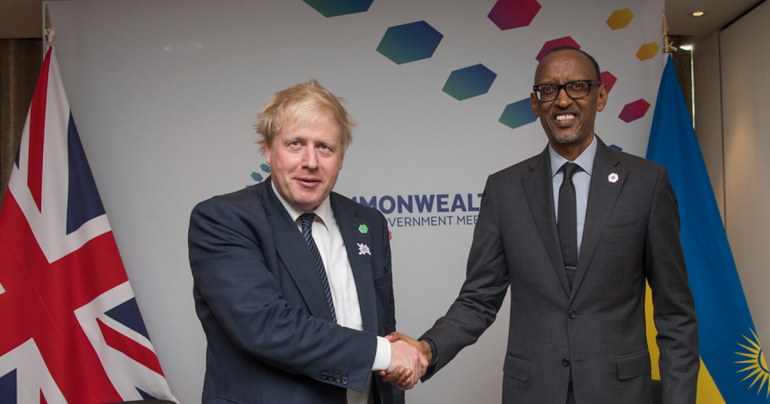 Even by recent standards, the furore that greeted the government’s new ‘Migration and Economic Development Partnership’ with Rwanda was deafening. The Archbishop of Canterbury said on Easter Sunday that the policy ‘does not stand in the judgement of God’. Prominent condemnations were issued by two of the 21st-century Home Office’s defining figures, David Normington and Theresa May, the latter on the rather conclusive grounds of ‘legality, practicality and efficacy’. Gillian Triggs, assistant secretary-general at UNHCR, called it an ‘egregious breach of international and refugee law’.

What, then, were they objecting to? The deal’s contents were undoubtedly unexpected. It did not entail the infamous Australian-style policy of ‘offshore processing’, whereby asylum seekers are removed overseas while their claims are processed. Instead, it represents the offloading of an entire chunk of our asylum system; some refugees will now be ‘eligible’ to be sent to Rwanda, where Britain will pay the authorities to process their claims and then either deport or resettle them. Boris Johnson expects to send ‘tens of thousands of refugees’ there in the coming years.

On a fundamental moral level, there is something deeply troubling about the world’s fifth richest country entering a ‘cash-for-refugees’ deal with a nation where, according to the World Bank, 60% of people live in extreme poverty, on under $1.25 a day, and which has already taken 130,000 refugees. We have a moral and legal responsibility to offer asylum – a human right – and through this deal a government claiming to represent ‘Global Britain’ has vacated an essential part of its international obligations.

This is complicated by the nature of President Kagame’s autocratic regime in Rwanda. Deutsche Welle’s Global Media Forum reported ‘enforced disappearances’ of journalists and opponents, and the suspicious deaths of exiles in South Africa and Mozambique. Earlier this year, Paul Rusesabagina, whose exploits in the Rwandan Genocide were immortalised in the movie ‘Hotel Rwanda’, was abducted in Dubai and jailed for 25 years. His daughter said pointedly that she did not ‘understand why the British government would decide to send vulnerable people to a country that is known to oppress its own people’. The UK’s own human rights ambassador said last year that she had serious concerns over the support given to victims of trafficking in ‘government transmit centres’: the kind of refugee processing which we are now funding. Meanwhile, the charity Rainbow Migration said that ‘Rwanda is not safe for LGBTQI+ people’, highlighting that they had even helped Rwandans seek asylum in the UK fleeing persecution for their sexualities. Considering that political dissidents and LGBTQ+ people are prominent categories within asylum seekers, sending them to a country with such a chequered record seems both a grotesque injustice and a violation of the international legal principle of ‘non-refoulement’, whereby no-one can be removed to a country where they may face irreparable harm.

Much, too, has been made of the cost: £120m upfront, plus an undisclosed cost per asylum seeker. This was clearly significant enough for the Home Office Permanent Secretary to inform Patel that he could not see ‘a deterrent effect significant enough to make the policy value for money’, forcing her to issue a Ministerial Direction. Australia, notably, spent £1.7 million per asylum seeker on offshore detention. This seems to me a slightly less convincing criticism: the government spends £4.7 million daily on private accommodation for asylum seekers, and if the scheme does indeed (spoiler: it won’t) prevent Channel crossings and thus tragic loss of life, the price tag should not be the foremost concern.

Either way, proponents of the scheme would have it that neither of these matter, for in fact the objective is not really to send anyone to Rwanda at all. To understand this, we must return to the entire Home Office view of the Channel crossings: the UK’s ‘pull factors’ attract illegal economic migrants, who clog up the asylum system and fund a criminal ecosystem of people smugglers. Almost everything that Patel says and does – indeed, the entire point of her Nationality and Borders Act, passed just days ago – is to clamp down on these so-called ‘pull factors’ and make Britain such an unattractive destination that ‘illegal migrants’ no longer want to come. Last January, a little remarked piece of secondary legislation outlined that asylum seekers who have passed through ‘safe third countries’ (i.e. France) on their way here are liable to be deemed ‘inadmissible’ and removed to a third country. The Home Office is banking on the threat of removal to Rwanda being enough to prevent migrants masquerading as refugees from getting onto small boats.

The problem is that this entire approach is based on several fundamental misconceptions of the challenges facing our asylum system.

The first mistake is the assertion that the system is dominated by what Patel called ‘vexatious’ claims from illegal economic migrants. According to a House of Commons report, only 28% of asylum claims were refused in 2021, and of those around a quarter were allowed on appeal. Therefore, the entire policy of cracking down on ‘pull factors’ is both malicious and completely pointless. People fleeing for their lives will still make the journeys, and instead all that is being done is throwing barriers in their way. This is reinforced when we look at countries of origin, the three largest of which in 2021 were Iran, Iraq and Eritrea. Anecdotal evidence from reporters in Dunkirk in recent days has backed this – the BBC found not one person who was sufficiently deterred by the Rwanda deal to decide to turn back. Genuine refugees fleeing war and persecution are unlikely to be deterred by the government’s policies, and the crossings will continue.

The second falsehood is the idea that the UK’s asylum system is overwhelmed because this is a uniquely attractive destination. In 2020, the UK had 6 asylum applications per 10,000 residents, compared to 11 as the EU average. Britain’s tally would have placed it only 14th in the EU. But the UK’s number of pending asylum decisions hit 85,000 at the end of 2021, double what it was two years previously; of these nearly 50,000 had been waiting for over 6 months. The Refugee Council found in research earlier this year that most decisions took between one and three years; meanwhile, the asylum seekers Patel is planning on sending away will be processed by the Rwandan authorities in three months. The solution to the backlog is not to limit the number of people applying – it is to properly invest in asylum processing, to provide firm political direction on difficult cases, and to streamline procedures where possible. None of these are happening now, and indeed Patel’s new ‘inadmissibility’ policy has only further complicated the assessment process.

The sum of these two misconceptions has led the Home Office to reject the obvious solution. This is to create safe and legal routes to allow asylum seekers to make it to this country without having to cross the Channel. The government has created these for Ukraine and Afghanistan – albeit incredibly inefficiently – but has refused to expand other resettlement routes, which accepted only around a thousand refugees in 2021. Patel seemed to acknowledge this in November, when she said that her legislation ‘does create safe and legal routes’, but this has vanished into thin air. Without these safe routes, asylum seekers are forced to use people smugglers, and to make the very crossings that the government is trying to clamp down on. Many such systems have been suggested: for example, allowing asylum applications to be tabled in foreign embassies; the creation of a ‘humanitarian visa’, allowing entry into the UK through regular channels; or the expansion of family reunion and unaccompanied child schemes. A variation on this would be to open a reception centre – or even a full-scale asylum processing facility – in Calais, ending the need for crossings at all.

These measures would stop the awful loss of life in the Channel. Yet the Home Office refuses, on the grounds that they would create ‘pull factors’ for migrants. Here lies the fundamental issue with the government’s policy: it will never create a fair and effective asylum system when it is determined to prevent people from claiming asylum in the first place.

It is easy to blame Patel for this heartless approach, but the uncomfortable truth is that she is merely reinforcing the worst instincts of those around her. The Home Office, in the words of former Immigration Minister Damian Green, is a ‘department for saying no’, preventing crime and terrorism, creating a culture antithetical to its immigration and asylum functions, which should be about saying yes (within carefully defined bounds). One has to think back only to the Windrush scandal to see evidence of deep, institutional racism. And Patel simply echoes the right-wing media and its political allies, who over years have entrenched hostility to immigration in broad swathes of this country.

“she is merely reinforcing the worst instincts of those around her”

On that very point, her government’s obsession with casting the EU as the villain of the piece has closed the door on one of the few other realistic and humane solutions: negotiating our re-entry into the EU’s Dublin Regulation, which obliges asylum seekers to claim asylum in the first country they reach (so almost certainly not the UK) and makes them liable to be removed to those countries for processing. As noted in a recent Fabian Society pamphlet, the loss of this deterrent following Brexit may be the single biggest factor in the explosion of small boat crossings in the last three years.

Instead, her deal may cause irreparable harm – and not just from the displacement of vulnerable people or the Kagame regime’s questionable record. The experience of Israel’s brief asylum arrangement with Rwanda suggests that instead of stemming people trafficking, resettled refugees paid the smugglers again to make it to Europe, furthering the cycle of human misery.

Then again, it might never come to fruition. The policy was a big political boost for Patel, whose approval rating amongst Tory party members has recovered in its wake, and Johnson, who has used it repeatedly to attack Keir Starmer’s Labour in the local election campaign and at PMQs. There has been considerable speculation that, safe in the knowledge of a protracted legal challenge, the government never plans to deliver a deal which remains elusive on basic issues like cost, eligibility criteria and transport. On one hand, that would be an enormous relief; on the other, it would be an equally damning indictment of the cynical, uncaring depths to which politics in this country have sunk under this government.