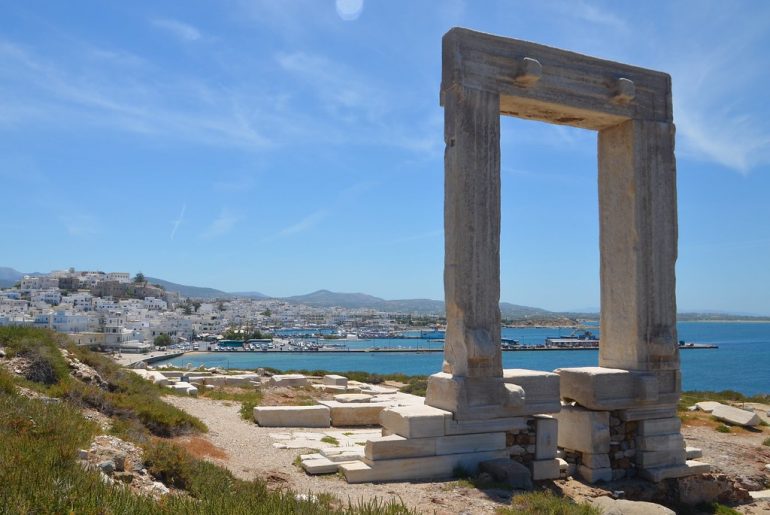 Solo in the Cyclades

Waking up in tents in hot countries is and will always be horrible. Although my tent was beautifully positioned in the late afternoon under the shade of two trees, I had neglected to account for the sun’s movement across the sky. The morning sun had blasted the dark green polyester walls for three hours before I woke up, that is, in a tent resembling a sauna and swimming in a pool of sweat. This was to be a frequent feature over the coming week.

My mission for the day was relatively simple – to get to the port to get to Syros. As we well know, the bus is a thing of myth and taxis are expensive, so I elected to walk. Hitchhiking was an alternative, though it would be a little facile to get murdered two days in to my trip. In this case, it was definitely more of a hike than a walk. Still, spirits high, backpack piled high, mountain before me high, I set off.

After a keen hour’s walk, I was well on my way to the top of the first hill when disaster struck. My bucket hat, my beloved, my authentic vintage Hong Kong rugby sevens 1993 bucket hat leapt for freedom off the cliff. Thankfully its descent was thwarted by some spikey plant twenty metres beneath me. Of course I, dutiful owner as I am, with no hesitation careered over the cliff to rescue my one and only. In actuality, I jogged the long, but safe way around the hairpin bend and through some undergrowth and retrieved him. Tragically, in my heroics I incurred a hole to the sock (right).

My mission for the day was relatively simple – to get to the port to get to Syros.

Careful to avoid another incident, I persevered hat-less along the gnarly spine of the island. I was having a quick water break when it occurred to me to actually appreciate the view. There’s a reason people climb hills: to look down at the immense view and feel the sense of achievement at having come up so far. I certainly felt that when I peered down from the ridge, looking back on the tiny stretch of not-quite-golden sand wedged in the cleft between two towering peaks, where I had been just an hour ago. It was a pretty epic moment.

Two hours of up and down later, the capital Ioulis came into view, perched imposingly on a hillside. At this summit I indulged once more in my staple Greek salad and Amstel, not a care in the world about my distinct backpack-induced sweat patches glaring at passers-by. From Ioulis it’s all downhill to Korissia. The view was magical once more. An unsuspecting chain of white, of activity tacked on to a sheer hillside. I chose to wait for my ferry in another waterside café, just sitting on the dock of the bay. I asked how much a beer was, and was met with “6 euro”. In the classic English fashion, I cordially ordered one, calm and level-headed on the outside, on the inside boiling with enmity at the price, institution and waiter. The ferry was late too. Nothing good ever lasts.

Nothing good ever lasts.

I read in my guidebook that the approach into Syros and its capital Ermoupoli is one of the most phenomenal sights in the Cyclades. It was dark when I got there. After disembarking the ferry, I made straight for my accommodation. The single bed ensuite at the Atlantis hotel is the cheapest room in all Ermoupoli and is an expectedly sparse affair, but it was luxury after the tent. I even had a balcony! Massive. I only had 12 hours on Syros and was intent on making the most of it. Post change and shower, I went exploring.

Ermoupoli is the capital of the Cyclades administrative region and is huge compared with other Cycladic towns. It stretches all the way up a 500m hillside and sparkles in the night sky. Interestingly, I was only three days away from bumping into Harry Maguire at the courthouse after he drunkenly smacked someone up on Mykonos. Next time. The lifeblood of the city is Miaouli Square, a neoclassical plaza that feels plucked right out of the Italian heartlands. The late night Mediterranean square scene is an established one: children screaming, those ghastly little balls of gunpowder exploding everywhere, flying footballs and nonchalant, drunk parents. All at midnight. I wandered through this customary melee of chaos for a while before I caught some kids laughing at me and became self-conscious so I left. To be fair, I was tired as anything and there’s only so much you can lament the tedium of English childhood before you get depressed.

Strangely enough, I woke up in my bed in my hotel room. I had a couple of hours before my ferry to Tinos, so I decided to get ahead on the tickets. I had pre-booked all of my ferry tickets, but they were required to be picked up. This is done from an agency in the port, but here’s the catch: every different ferry company uses a different agency, but all the agencies have the logos of all the ferry companies on the shopfront, and which agency the ferry company uses changes every so often. So, it’s just a case of trial and error, and it’s very annoying. It’s a very Mediterranean system too, just carnage. Still I managed to pick up all the tickets for the rest of the week, enjoying my tour of the waterfront.

The sunlit view of Ermoupolis was even more spectacular than the night-time one. I was sad to leave it behind having barely explored it, but there was plenty more to see, like Tinos, which has precisely one thing to see. It just so happens though, that this one thing was the most spectacular of the trip. There’s a church on Tinos which is a pilgrimage sight in the Greek orthodox tradition. It’s got a long Greek name that I can’t be bothered to reproduce and that you wouldn’t remember even if I did, but if you google ‘church Tinos’ it comes up. I’ve checked. Anyway, this lovely bit of architecture sits proud above the small port town, gleaming down on us mere mortals like any good ecclesiastical structure. The road up to it even builds suspense, or perhaps a sort of penance-inspired dreading excitement, with a lovely red carpet all the way up the pavement. I felt very humbled, and soon after, out of breath. The view from the church is typical of the Cyclades: you can see the sea and some other islands. Shocker. Still pretty nice. There’s no point me describing the architecture because an image will do a better job, but for the sake of the narrative I will affirm that it’s very beautiful indeed. 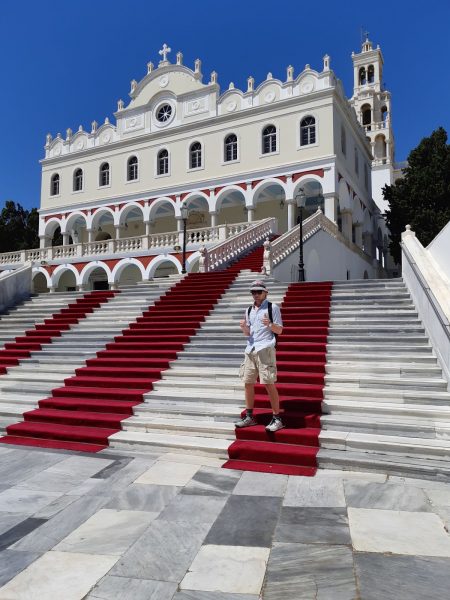 The one attraction on the island done, I went down to where I would be staying, dutifully buying an icon for one euro on the way. Tinos, like Syros, lacks a campsite, so I again booked the cheapest room I could find on the island. This place was quite nice, and more expensive. I had my own little bungalow hut type thing with an egregious three beds in it. I settled down to some reading and sleeping, figuring that I might as well make the most of my final tranche of luxury. I had another Greek salad for dinner on another town square, although a definitively btec one. Don’t worry, the trip’s about to get more interesting.