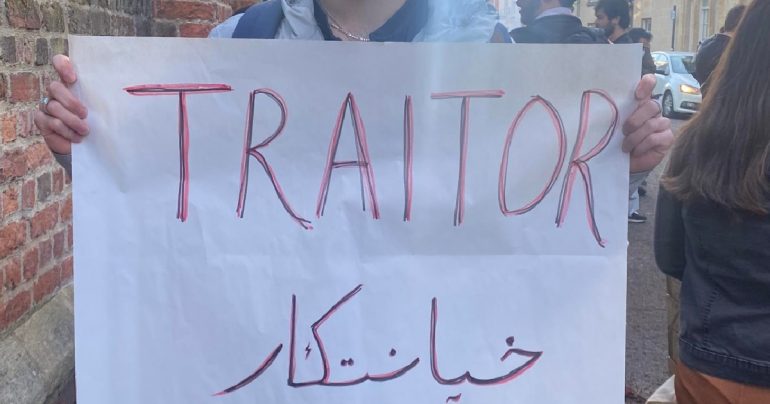 A group of protestors gathered outside the Oxford Union on Wednesday, 11 May, in opposition to the invitation of Afghanistan’s former National Security Advisor, Hamdullah Mohib.

In a recent article published by the Cherwell, the Afghan community at Oxford have also managed to circulate a petition garnering more than 10,000 signatures opposing Mohib’s presence at the Union.

In response to ongoing pressure, the Union decided to change the accessibility of Mohib’s talk to a ‘members’ only event’, shortly before it took place.

Summia Tora, one of the few members of the Afghanistan society with a Union membership, attended the event and interrupted Mohib’s speech in defiance. She eventually left the chamber in protest after he consistently failed to offer meaningful responses to her questions.

When she interrogated Mohib about the report of himself driving a red Bentley in London, and asked him how he would hold himself accountable for the tragedies in Afghanistan – Mohib’s response to her was merely, “I understand your frustration”.

Summia spoke to The Oxford Student regarding her first-hand experience as a refugee, and holds the belief that Hamdullah Mohib played a significant responsibility in the collapse of the Afghan government in 2021.

Protesters chanting, “Oxford Union let us in!” outside the building.

One student from the Oxford Afghanistan Society also told The Oxford Student that “the Oxford Union is a space of power, they should have consulted their marginalised Afghan students when deciding to invite him after the tragedy that took place in Afghanistan,” and how, “lying to a nation and its people is not free speech. Leaders (like Mohib) who are criminals should not be given prestigious platforms while the people of Afghanistan live under suppression.”

Another student added, “it is important to know that if Afghanistan had a functioning state and judiciary, Mohib would have been tried for treason and locked behind bars. But we don’t have that recognised and functioning, legitimate state because of people like him and the former President.”

Mohib has been criticised by the Oxford Afghanistan society in a public post on Twitter for his “facilitative role in the ongoing murder and genocide of thousands of Afghans and the crippling humanitarian crisis they are subject to,” and for notably fleeing the country upon the Taliban takeover in 2021.

He allegedly fled Kabul on August the 15th, and has been reported to be living lavishly abroad. His frequent appearances at distinguished talks and events have resulted in constant backlash from the Afghan community.

Outside the Union, protestors brandished placards called Mohib a traitor, and urged for the ending of Hazara genocide, with chants of “Oxford Union let us in!” and “Hamdullah Mohib, Traitor!” echoing along St Michael’s Street.

Update as of 16.05hrs, 17 May 2022 – An official spokesperson from the Oxford Union has responded to us with the following statement: “All of our members were invited to listen to Mr Mohib’s perspective and challenge him during the interview, as they are able to do with any of the speakers we invite to the Oxford Union.”