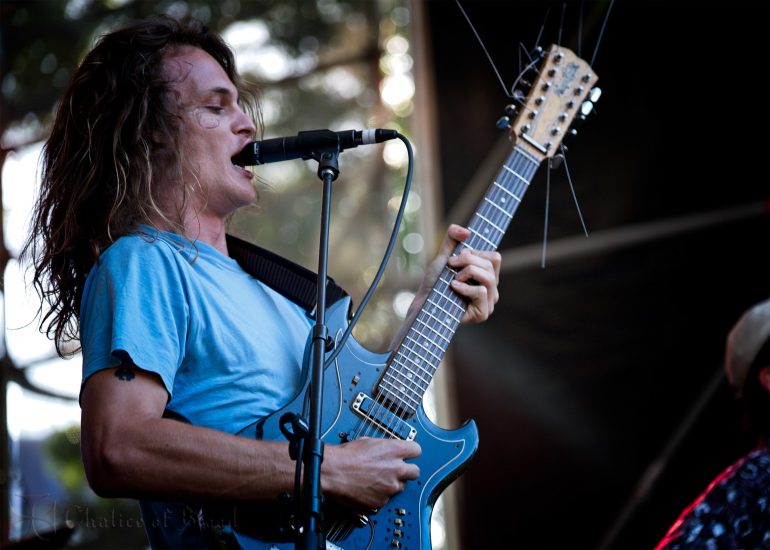 Review: Omnium Gatherum by King Gizzard and the Lizard Wizard

Omnium Gatherum, the latest release by Australian quasi-psychedelic prog rock band King Gizzard and the Lizard Wizard, is an acid-fuelled fever dream of weirdness. The album is a collection of offcuts, songs which did not fit into previous albums reanimated, made complete, and slotted in amongst a handful of new tunes. It’s a risky strategy for a band renowned for politically charged works on big issues, and those after a hazy yet gritty admonition of the perils of fossil fuel dependence will be disappointed. But aside from these, or frankly any, expectations, it is a complete work full of humour, profundity, and unique sounds.

Few artists can compete with the prolific ‘Gizzy’ on volume of musical output: astonishingly, this double-LP is the twentieth album that the band has released in a decade. King Gizzard have earned the right to choose their own musical direction and to fly in the face of expectation, and they waste no time in doing so in this album. The first track, ‘The Dripping Tap’ is an unapologetic eighteen-minute thrash, lasting the whole of side A. It opens in the melancholic lounge-pop style of Oddments (2014) before turning up the metal just one minute in. The lyrics and melody of the introduction recur sporadically over the driving distortion-heavy guitar line, and the drums push ahead incessantly. In spite of the speed at which most of the song moves, there is no rush, and eighteen minutes slips by effortlessly. Frontman Stu Mackenzie’s vocals are mischievously tongue-in-cheek and the entire track boasts an attitude of unfazed playfulness. Dizzying, maybe. Impressive, no doubt.

The title of the album means ‘an assortment of miscellaneous things’, and the freedom of this concept is palpable. Side B glides through synth-led ‘Magenta Mountain’, a hits-the-spot pop track, into the jazz-hop style ‘Kepler-22b’ before moving onto the thuds and grates of metal smash ‘Gaia’. The first four songs have no right to be in the same album, but that doesn’t bother The Gizz. The switches are erratic but the transitions are beautifully crafted and rarely feel forced. ‘Gaia’ melts into ‘Ambergris’ with the ultimate satisfaction and it’s clear that the group is up to this ambitious task.

Not every experiment hits the mark though. ‘Sadie Sorceress’ is Gizzy’s surprise rap debut, bottled 90s hip-hop mixed with crash-bang-wallop bassline funk and poured over pseudo-ironic angst. It calls back to a strange phase for music, the mid-2000s hey-day of white male American rap: artists with full tattoo sleeves and names like ‘Mac Lethal’ evacuate their Mid-Western twang all over the floor with a fuzz-pedal bass backing and an indifferent drummer to boot. It doesn’t do it for me. Whilst I am a big fan of the throw-enough-shit-some-of-it-will-stick approach, I think this one will go down as an own goal.

Whilst I am a big fan of the throw-enough-shit-some-of-it-will-stick approach, I think this one will go down as an own goal.

The rest of the album rocks back and forth with the delightful ease of an inside joke. There’s time for silly ideas like ‘The Garden Goblin’ and ‘Presumptuous’, tracks slathered in the indulgent nonchalance and disposable hyperbole of a band pulsating with confidence in its own unique sound. The punchline finally lands with the last four songs. The overdrive vocals of ‘Predator X’ are extreme to the point of ridicule, which give way to a psychedelic fade-out lasting three songs. ‘Candles’ is a masterclass in the drummer’s ability to entirely dictate the mood of a song. Spooky synth overlays leering vocals and it is the drums which remind us if we weren’t sure before: we needn’t take any of this too seriously. We might think that we’re getting it, but the last laugh is Gizzy’s with ‘The Funeral’. Search for the meaning if you like, but the inescapable fact is that this album remains ‘an assortment of miscellaneous things’. A perfect cadence would feel wrong at the end of over an hour of chaos; it at once jars and fits seamlessly, simply by virtue of its weirdness.

Omnium Gatherum is a complete work. King Gizzard and the Lizard Wizard started life out as a jamming outfit and this album illustrates how they have evolved without losing sight of the musical freedom upon which they are founded. It is an album where the overarching point is that there is no overarching point; it takes this as its unifying principle and enacts it uncompromisingly. The album speaks of an uninhibited group of musicians unfazed by external expectations of their sound. Very few of these tracks will make it onto your playlist and some miss the mark entirely, but they’re clearly enjoying themselves in their weird acid-trip delirium, and there’s a lot of joy in being there with them.