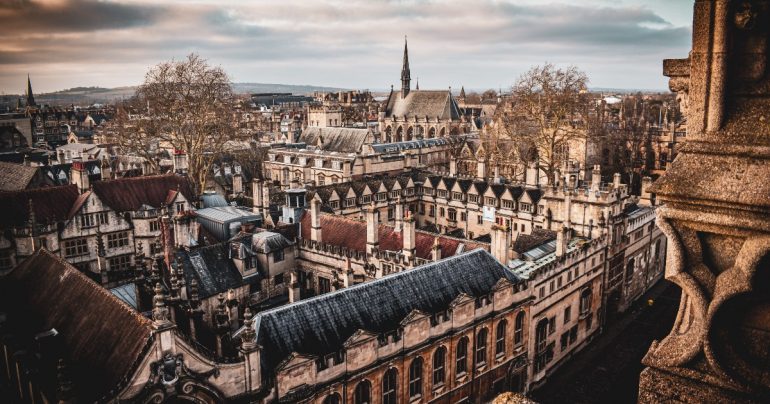 "How a Tiny Caste of Oxford Tories Took Over the UK"

I write this review with the redbrick Union visible from my window and the sound of applause within earshot, though sometimes it is music (or, at night, unearthly shrieking). That gated edifice and the privilege it represents forms the focus of Simon Kuper’s book Chums, which argues that Oxford was the crucial formative experience for the Tory coterie who went on to push Brexit.

Reading this book as a current student, one is struck by how easily it might all happen again – or still be happening, with someday prime ministers as hacks, squabbling away with their future Cabinet. Kuper highlights the Union as a training ground for Parliament, a place for students to practice good oratory before launching into political careers, often along the well-worn path from Oxford to Westminster.

Boris Johnson’s tactics in running for Union president, he observes, were uncannily similar to his efforts at gaining Downing Street, and Kuper’s portrait of Johnson is the most interesting. We are told how our government leader honed his “charm” in the Union chamber, learning that sheer personality could attract voters. Still, his first (failed) attempt at presidency involved his then-girlfriend inviting his opponent for tea, asking him not to go against “my Boris”. Kuper notes that not much policy was enacted once he had won and, with an awful sense of fatalism, points towards his mishandling of the pandemic as conforming to pattern.

…the main picture this presents is one of startling entitlement and, more dangerously, narrow thinking.

Where this book does best is in the obsessive tracing of connections: the Etonian Boris Johnson was messing about at the Bullingdon club while the spectacled Michael Gove led tours around the Union. Both Gove and Jacob Rees-Mogg (“dressed like a Victorian vicar” even then) had been awarded the title of “Pushy Fresher” by Cherwell and were popular objects of satire. Meanwhile Keir Starmer argued for the printers’ strike at the Labour Club against the more centrist David Miliband. The Labour Club also held debates but with rules that “killed high-wire speechifying”; no wonder, as Kuper sadly suggests, Starmer is such a dull speaker.

The hyper-intense focus on the Union of course risks complacency. It’s satisfying to read anecdotes such as how Nick Robinson, then president of the OUCA, goes on to present the Today programme several decades later, “where in October 2021 he told a verbose Johnson, ‘Prime minister stop talking’” – like having puzzle pieces click into shape. Yet the main picture this presents is one of startling entitlement and, more dangerously, narrow thinking.

That the political network at the height of the establishment is so intimately linked is no surprise, but the extent to which this affects policy is urgently relevant. With the economy still suffering from the impact of the pandemic, knowing that the government is dominated by elites willing to risk people’s livelihoods for a hole-ridden dream they had as twenty-somethings posing theories in their JCR seems far from reassuring.

This feels more tragic given that they tread in the shadows of men (they were mostly men) who invested much of their lives in trying to secure prosperity. There is a fascinating chapter called “A Generation without Tragedy”, which posits that politics have become less serious since the deaths of those who had first-hand experience in the wars. I had not realised that so many past prime ministers had engaged in direct conflict; Kuper states that from 1940 to 1963, Britain was ruled by individuals who had volunteered to fight in the First World War. It is sobering to consider how the UK’s entry into the EEC was influenced by a desire to avoid such conflict as would lead to death and devastation – while Brexit began almost as a Union boy’s whim.

Somewhere out there (heaven forbid!) a hack is dreaming of Downing Street.

Still, I am not quite so cynical as Kuper, whose solution to the problem of Oxford alumni dominating the establishment is to “stop them [the university] teaching undergraduates” altogether. I clearly have a vested interest in disagreeing, but the suggestion does seem terribly facile. Better to improve the access work already in place, or expand them further, than take it all apart.

A book like this necessarily involves an element of complicity. When Kuper (columnist at the Financial Times) notes how “Oxbridge men used their establishment podiums to issue ritual laments about the powers of Oxbridge men” but “they struggled to feel this viscerally”, the reader cannot help feeling that the pronoun should be “we”. What does it mean to “feel this viscerally”? To contend, engage with, and negotiate privilege is something that every student at Oxford, regardless of background, must do – though we are forced to in different ways.

There are the parts of Oxford which do not speak to a narrative like the bleak one presented by Kuper. Last month, Oxford Against Conversion Therapy held a strong protest against the government’s refusal to ban conversion therapy. More recently, some colleges have voted to sign a pledge promoted by the Can’t Buy My Silence campaign to stop using non-disclosure agreements in cases of sexual violence, bullying, and other misconduct. There is a lot of dedicated effort especially by BAME reps to ensure an atmosphere of welcome and understanding. David Cameron who called the Brexit referendum in 2016 may be an alumnus from my college, Brasenose, but it is hardly a point of pride.

I believe that, while there might be a future Boris Johnson II walking in our midst, it’s more likely that there are cleverer and kinder people. At least, I hope so.

It’s not a romanticised, rose-tinted view. Sure, there might be fireworks, garden parties, or jazz music floating through the night, from the Union visible from my window. But there are also drunken yells and crashes. Somewhere out there (heaven forbid!) a hack is dreaming of Downing Street. But there are more who dream of better.

Featured image description: a view of Oxford against a cloudy sky