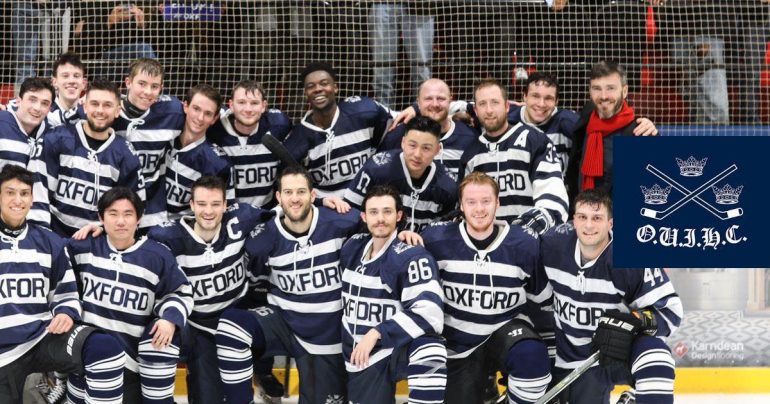 When you think of Oxford, ice hockey might not be the first thing that comes to mind. But the sport actually has a long and extensive history within the University, with the first Oxford/Cambridge Varsity match taking place all the way back in 1885 in St Moritz, Switzerland. The Oxford University Ice Hockey Club (OUIHC) continues to be popular with students to this day: the OxStu chatted to two of its players, Jeff Fasegha (MSc African Studies, Jesus – next year’s Men’s Blues captain) and Henry Rhyu (MSc Criminology and Criminal Justice, St Antony’s)  about the sport, its ongoing success, and how students can get involved.

How did you get involved in ice hockey?

Jeff: I was born in Nigeria but I grew up in Calgary in Canada. I used to watch the Calgary Flames, the local NHL [National Hockey League] team. The captain back then was called Jerome Iginla, who is now Hall of Famer in the NHL. He was also half Nigerian, from the same part of Nigeria as my family. Seeing this guy play I thought, oh, yeah, that’s exactly what I want to do. So I started playing hockey when I was seven.

Henry: I started playing ice hockey when I was 8 years old not long after I immigrated to Vancouver, Canada to make friends, learn English, and become adjusted to Canadian society. After my very first session, I was hooked and so my parents signed me on to play for a local team. I gradually began improving and I progressed up the ranks the next 8 years until I eventually signed to play Junior “A” ice hockey in British Columbia at 16 years old. I had a lot of fun memories playing this sport and I feel very lucky to have had this opportunity.

How did you get started in the OUIHC?

Jeff: I came to Oxford on a Rhodes Scholarship. There’s a strong ties between Canadian Rhodes Scholars and the hockey team – they were the ones who initially started the team [in 1921]. A Rhodes Scholar from Calgary, my hometown, was captain 10 years ago and was the first one to tell me about the time. Henry and I went to the same undergrad, but didn’t meet until the summer before we decided to play on the team. He also encouraged me to join. So I shipped out my gear, and signed up. There are lots of international students on the team, mostly Canadians, Americans. Russian, Swedish. But there are also 2 Brits! It’s been great getting to play with people from around the world.

Henry: I connected online with Jeffrey Fasegha during the summer before coming to Oxford. We both graduated from the University of Toronto for undergrad and had some mutual friends so I reached out. It was during our first time speaking in person that he filled me in about the ice hockey team and asked if I would be interested. Long story short, we were both interested and reached out to Matthew Downer (the captain) online shortly after.

We’re a group of students who have fun playing our game, but when the puck is dropped we all go in 100 percent

What leagues and competitions do the OUIHC play in? Which of its recent achievements are you most proud of?

Jeff: We have our Varsity match against Cambridge every year. And then we have Nationals, where all the British universities come to compete. There’s also the British University Ice Hockey Association, where we play a regular season. We finished towards the top of our division there, but unfortunately we lost the Varsity match to Cambridge when they scored the winning goal in the last minutes! In the Nationals we beat Cambridge in the quarter finals but lost to St Andrews, in the semis.

Henry: I am most proud of our effort and performance at the UK Nationals Championships that took place this past April. We came tied for 3rd place in the country and lost in the semi-finals to the team that eventually won gold. At this tournament, we played 8 games back-to-back over the course of 2 days. Our whole team bonded very well and we persevered through the tough schedule.

In terms of individual performance, both Eli Harris-Trent and Jeff Fasegha were named to the National All-star Team. Thanks to some amazing passes from my teammates, I managed to come 5th in the tournament for points registered.

More importantly, I want to emphasise that every single person on the team really stepped up. We’re a group of students who have fun playing our game, but when the puck is dropped we all go in 100 percent. Every single line stepped up and we had a great experience and weekend as a group, with Matthew Downer leading the team as captain.

What opportunities are there for students to get involved in ice hockey?

Jeff: This year, there’s still ALTS hockey, which happens at the Oxford ice rink, which happens every Wednesday night and Friday night at 11.30pm. They have open skates, so if you’ve never played hockey, you can go and pick up a hockey stick, rent skates, and play hockey with other people who are new to the sport. That’s a lot of fun.

Henry: The Vikings teams are developmental teams that are open to all students at the University of Oxford and Oxford Brookes seeking to begin their ice hockey journey or hone their existing skills. We are open to and actively encourage players of all skill levels to join the team! On-ice practices typically take place one to twice a week at the Oxford ice rink, while gym sessions take place once a week at Iffley Sports.

Jeff: We have a men’s Blues team, and a women’s Blues team. If you’re new to hockey, and you want to play, you can join the Viking squad and get a chance to develop and learn how to play hockey. There’s going to be try-outs in Michaelmas term next year, but I would say if somebody’s interested they should send an email to the OUHIC because we’re always looking for new people to play.

What social opportunities are there within the club?

Jeff: We have a lot of social activities within the club, but we also open things up during the season when people come to the games and we all go out after. Its a lot of fun, would highly recommend checking it out next season!

Henry: My favourite thing about the OUIHC is definitely the camaraderie between all the players. All the players are extremely supportive and I very much enjoy my time with them off the ice as much as I enjoy playing hockey with them. While I will unfortunately not be able to be part of next season’s squad as I am set to graduate in the summer, I am excited for the new leadership team to help bring about another fantastic season. We recently elected Jeff Fasegha as the captain, as well as Nils Lager and Matthew Downer as alternates. Under their leadership, I believe we have a great shot at coming first in Nationals next season and beating Cambridge in the Varsity Match!

Image description: the team members of the OUIHC’s Blues squad