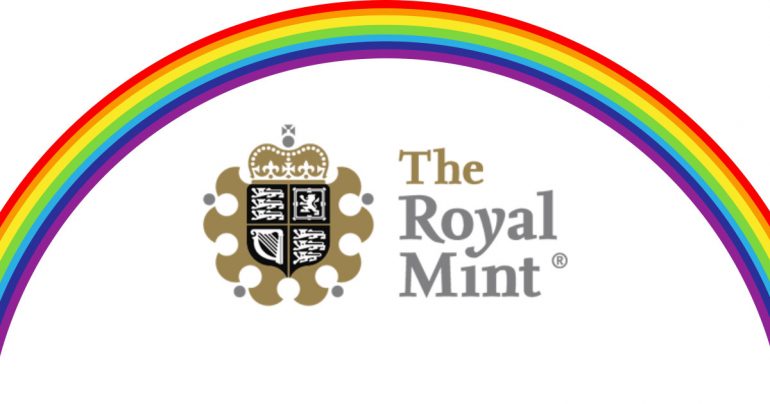 Image Description: The Royal Mint logo, crowned by a wonderful rainbow, in lieu of their issuing a 50p Pride coin.

On 20 May 2022, the British Royal Mint issued a commemorative 50p coin to celebrate the 50th anniversary of the UK Pride Movement, made in partnership with Pride in London. The coin will not be in circulation. Instead, it will only be available online.

The Royal Mint has historically used the 50p coin to commemorate special events. This is the first time that official UK coinage has celebrated the country’s queer community.

The new Pride coin has the number “50” inscribed at the top. Its face features a silver filigree with a heart motif. There are five rainbows which feature Pride in London’s five values: Protest, Visibility, Unity, and Equality. At the bottom is a series of five chevrons: white, pink, blue, brown, and black. These five chevrons, in combination with the rainbows, are a reference to the Progress Pride Flag. The coin was designed by an east London artist, writer, and LGBTQ+ activist: Dominique Holmes.

In an interview with Dezeen, Holmes said they designed the coin with the purpose of evoking “images of the original Pride marches – the hand-made placards and protest signs calling out the demands of the brave LGBT+ people who were taking to the streets to fight for their rights.”

Those involved in the coin’s creation have been excited about its imminent release. Pride in London director Asad Shaykh told the BBC that “Nowhere in the world had this been possible, except the UK. Pride in London feels very proud today.”

The Pride UK 50p coin will be released this summer, but the Royal Mint has not announced a specific date.