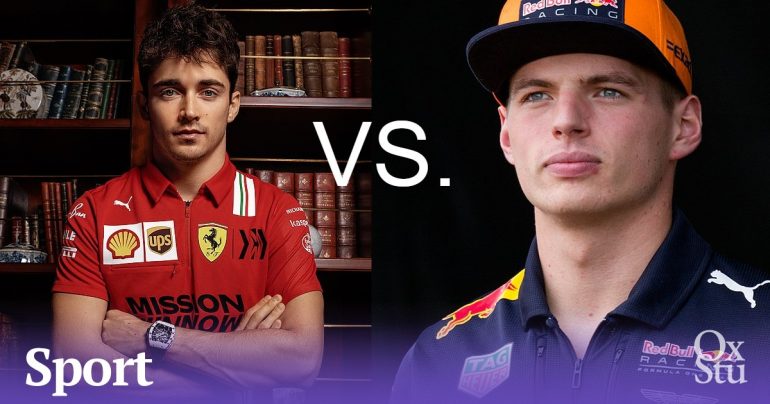 This Formula 1 season has so far proven to be a titanic and fascinating battle between F1’s two greatest young drivers of this generation. Max Verstappen is a Dutch driver who currently races Red Bull Racing Team, and is the reigning World Champion having won his first ever World Championship last year following an equally blockbuster battle with Lewis Hamilton. Charles Leclerc is a Monégasque driver for Scuderia Ferrari, having spent several seasons now establishing himself as a fast, consistent racer with a car that didn’t match his abilities. Who will come out victorious at the end of a thrilling season?

Charles Leclerc had established himself as a promising young talent within the sport long before his entry in Formula 1 with great success in the junior categories, notably winning the 2017 Formula 2 Championship by 72 points over his nearest rival and becoming the youngest ever driver to win this Championship. His first season in Formula 1 racing for Sauber allowed him to showcase the obvious talent which had earned him such a great reputation as a young driver. He would finish his first season in Formula 1 in 13th in the Championship, 30 points ahead of his teammate who he would out-qualify a staggering 17 out of 21 times. The greatest way for a Formula 1 driver to display their talent is to be consistently ahead of their teammate, the only other person with an equal car to them, and Leclerc’s obvious success earned him the seat at Ferrari which he continues to hold.

Despite having teammates of a high calibre since arriving at Ferrari, 4-time World Champion Sebastian Vettel and fan favourite Carlos Sainz, he has been able to hold his own successfully against these teammates and achieve relative success during a difficult period in Ferrari’s history. He finished 4th in his first season at Ferrari and 8th in his second season compared to Vettel’s 5th and 13th place finishes. And while Carlos Sainz finished ahead of him last season, this was only by a margin of 5.5 points.

Fast forward to this season and Charles Leclerc finds himself in the first title fight of his Formula 1 career. After 6 races, he finds himself currently only 6 points behind Verstappen, having already won 2 races and claiming 4 pole positions so far, highlighting his unbelievable one-lap pace which may prove instrumental in helping him overcome Verstappen at the peak of his powers.

In the 2022 Formula One season there will only be one winner, and that man will be Max Verstappen.

Currently sitting pretty atop of the World Drivers’ Championship is none other than reigning champion Max Verstappen. Having just won the Spanish Grand Prix, Verstappen is in form that is quite simply ominous for the rest of the grid. This makes it three victories on the bounce, and more impressive is that this means Verstappen has won every race he has finished.

Indeed, there has been an almost Terminator-like quality to Verstappen this season. Somehow, someway, he hunts down the cars in front of him and comes out on top. After a venture into the fine gravel of Barcelona and a very temperamental rear wing, it looked as if this might be the weekend that Max falters. Yet, one Charles Leclerc DNF later and Verstappen stole the win.

Charles Leclerc, the man who many others back to take the title, the man who will not beat Max Verstappen in a title fight. Why not you ask?

For one, Verstappen has already done it. This might sound simple, but no title fight can put you under as much pressure as your first, let alone one where you have to beat arguably the greatest of all time in Lewis Hamilton. Verstappen has experience that Leclerc simply does not, he knows where a desperate rival might send a late lunge because only one year ago he was that very rival.

Furthermore, Verstappen has proven his ability to be relentlessly consistent. Since his FP3 crash in Monaco 2018, Verstappen has been at the peak of his powers. Over a Grand Prix he will keep that Red Bull at its very upper limit, and he has proven that he can do this without making many costly mistakes. In contrast, Leclerc has shown that sometimes he does make the errors that count. Take his qualifying crash last year in Monaco, losing the chance to start his home Grand Prix from P1.

Finally, the proof is in the pudding of their wheel to wheel encounters this season. After Leclerc outfoxed Verstappen with some DRS shenanigans in Bahrain, the victories have fallen to the Dutchman. You cannot trick Max Verstappen the same way twice.

With his immaculate car control, bulletproof mentality, and formidable straight-line speed, the WDC will be staying in the firm grip of Max Verstappen this season.