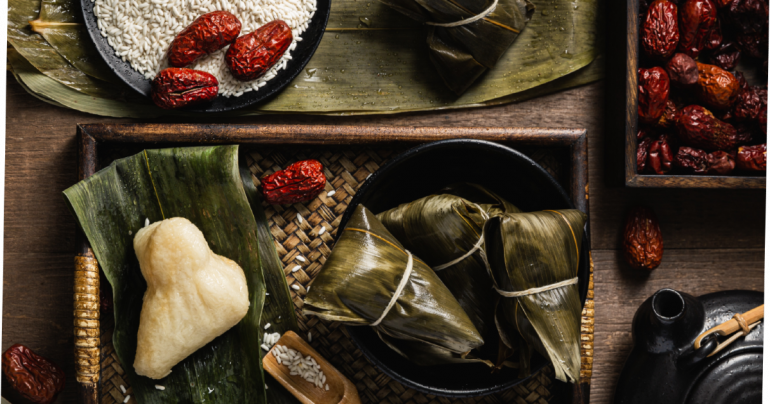 And what zongzi means...

But what is it? I hear you ask.

It appears to be a small parcel that is vaguely shaped like a pyramid. A parcel wrapped in a leaf, like something out of My Neighbour Totoro, except a fragrant steam is rising – don’t touch, the zongzi is still hot.

I present to you zongzi, or rice wrapped in bamboo leaves. The name is also sometimes translated as ‘rice dumplings’, although such a name does little justice to this delectable concoction. Eating zongzi is one of the main ways to celebrate the Dragon Boat Festival, or Duanwujie, which also sees people taking long boats painted as colourful dragons to race along the river, in China, Hong Kong, Taiwan, but also more recently in America.

It takes place on the fifth day of the fifth month of the Chinese lunar calendar. Admittedly, I’m unfamiliar with moon phases, but my relatives assure me it means zongzi shall be made and eaten on Friday 3rd June.

The making of zongzi ought to be a group effort, as my mum would pointedly say, since it requires various stages and ingredients – glutinous rice, soya sauce, pepper, and five spices. The filling has to be stewed separately. Often people choose marinated pork belly, but since we’re vegetarian this typically means tofu, peanuts, soya meat, and shiitake mushrooms. I like these savoury ones best, although there’s a sweet version, with red bean paste, dried fruit, or chestnuts; you might eat these with honey and a cup of hot tea.

The fiddly bit comes next: wrapping the rice in leaves. You can buy dried bamboo leaves in most Chinese supermarkets around this time; it’s usually the job of my sister and I to rinse them after they have been soaked, and then snip off the tips with a scissors.

To eat – undo the string and carefully remove the leaf.

My own attempts at wrapping zongzi always end up slightly lopsided… First, you overlap two leaves to make a little cone which you fill with rice, before adding some of the soya meat or shiitake mushrooms you stewed earlier. After some deft folding, the leaves are secured with a string, tied in a ribbon. The zongzi then has to be boiled for a couple of hours, depending on the size of your zongzi, and you can freeze them afterwards (they’ll keep for months!). Steam them when you’d like to eat them; a rice cooker works well for this.

To eat – undo the string and carefully remove the leaf. The bamboo gives an extra special aroma to the rice, which should be a light golden colour, and very sticky. The stewed filling lends another dimension of flavour, and the corners are QQ and therefore delightful.

It is nicest, I believe, with a generous dollop of sweet chili sauce.

Now, I don’t mean to spoil your appetite, but like any good journalist I feel compelled to explain its history. The lovely festival food you have just (imaginatively) eaten was meant for the fishes – as a thoughtful alternative to devouring a human body.

You see, if you were living in c.278 BC, you would really have been tossing the zongzi into the Miluo river. It would have been a hasty affair, the rice bundled up in silk, your thoughts elsewhere. Because what if the fish got at him? A great poet named Qu Yuan had drowned himself, disillusioned by the politics of his time.

The trigger for this act is unclear, though the story I’ve been told is that he went to the emperor and tried, very eloquently, to persuade him to address the corruption of the court and alter his policies. He cared a lot about this disappointing emperor, so his anguish at being totally ignored was twofold.

And so the people who loved the great poet rushed to river. Qu Yuan, as a social idealist and perhaps arguably a ‘people’s poet’, was popular among the ordinary folk who, seeing that they could not save him, believed they could at least try to save his body and soul. In boats and at the river’s edge, they banged drums and shouted at the fish to leave him alone, and someone had the idea to throw rice into the river, to help Qu Yuan’s body remain in peace.

According to this legend, the Dragon Boat Festival developed from the race to save the poet, and then to search for his body in the river. It is more than that, of course, because the search for Qu Yuan suggested a poignant effort to recall lost ideals. Other legends suggest dragon boat racing originated as a ritual to avert misfortune. The festival has taken on different commemorative meanings over the years, such as remembering the death of the feminist revolutionary Qiu Jin, who was killed in the early 20th century.

These days the Dragon Boat Festival is also simply a celebration of summer, of family and community and eating glorious food. Like many festivals, it’s a good excuse to have fun. And zongzi make lovely gifts; I always felt very pleased and proud when my friends tried it and found, to their surprise, that rice wrapped in leaves could be so delicious.

Most of us in Oxford won’t be able to get a tasty zongzi, so here’s a simpler game for the Dragon Boat festival: a superstition claims that if you manage to make an egg stand by itself, you’ll have good luck. Exam-takers, take note!

Featured image description: a tray of zongzi, with dried fruit and a pot of tea