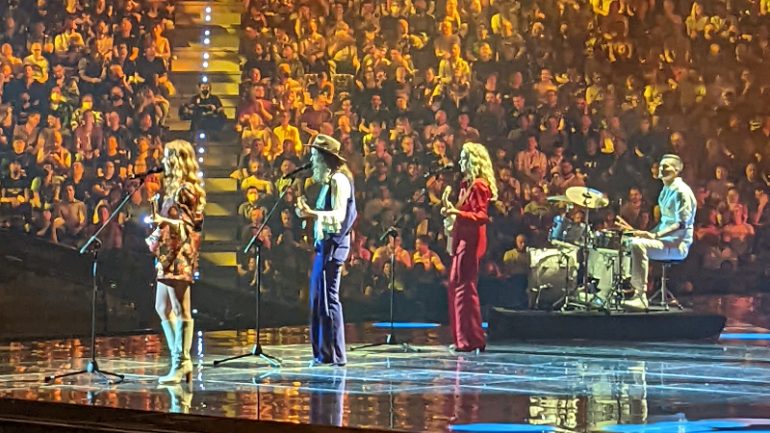 Nothing makes us feel more connected as a continent than the Eurovision Song Contest. This annual competition involves contestants from all over Europe (and Australia, for some reason) performing songs selected by their national broadcaster with the hope that they will be crowned the winner. It is a celebration that fosters connections amongst Europeans as we all eagerly watch the best (and sometimes the weirdest) of what Europe has to offer.

The Eurovision Song Contest has a colourful history of diverse acts. From Maneskin’s “Zitti e Buoni” last year to 1974, to when ABBA catapulted to global stardom following their performance of “Waterloo”, Eurovision’s importance to pop culture should not be ignored. More recently, this is evident on platforms like TikTok, where the songs of Eurovision winners like Duncan Laurence’s “Arcade” have gone viral. Even when songs don’t win, they can still become immensely popular – this year’s UK entry “Space Man” reached number 2 on the chart despite ending up as the runner-up in the competition.

Eurovision songs are iconic. They are what make the competition so fun – it’s the only contest where you wouldn’t be surprised in the slightest when an Icelandic ballad is immediately followed by a folk-rock song about a train going from Chisinau to Bucharest. Historically, songs in English have had greater chances of success, but this is changing as more winners sing in their own language. The songs reflect the diversity of Europe; this year, the Serbian entry consisted of a critique of the Serbian healthcare system sung in Serbian and Latin, featuring a woman repeatedly washing her hands in a little sink and wondering how to get hair like Meghan Markle’s. Concerningly reminiscent of a cult, but a typical Eurovision song nonetheless.

This year, Eurovision had two semi-finals with 17 countries in the first and 18 countries in the second; the top 10 from each semi-final then progressed to the finals, where they performed again in addition to performances from the nations who are the biggest financial contributors (France, Germany, UK, Spain and Italy). The votes were tallied, with 50% coming from professional juries and 50% coming from the public. The geographical composition of Eurovision changes every year as countries decide whether or not to compete; sometimes, they are disqualified, as was the case with Russia this year. Countries may also choose not to compete due to financial reasons or as a protest against the inclusion of other countries, or they may simply be unable to join the competition if they are not members of the European Broadcasting Union.

The first semi-final led to countries like Ukraine, the Netherlands and Greece passing through at first, second and third respectively. Ukraine was a popular favourite from the start that led the televote, while Greece and the Netherlands presented emotional ballads that were well-received by the jury, who ranked them first and second respectively in the jury table. Viral songs such as those from Norway and Latvia also featured in this semi-final, with Latvia’s song “Eat Your Salad” about… environmentalism… unfortunately failing to secure a place in the final. Other notable acts include Slovenia, whose band consisted of five teenagers singing a satisfyingly upbeat song about a disco with saxophone solos throughout, or Portugal’s ethereal indie pop entry “saudade, saudade”.

In the second semi-final, the favourites included Sweden, Australia and Serbia. Interestingly, Sweden’s “Hold Me Closer” won more votes (396) in the second semifinal than Ukraine (334) did in the first semifinal, despite Ukraine winning in the overall final. Other songs that made it through to the final included cowboy-themed “Hope” from Estonia, which the jury voted in as third, or the dance track “Llámame” from Romania. A popular entry that didn’t make it through was Brooke Scullion representing Ireland, who presented a catchy pop track called “That’s Rich” which will be definitely featuring in my Spotify Top 100 this year. Interestingly, Azerbaijan’s performance in the second semi-final led to zero votes from the public, but 96 votes from the jury – these jury votes pushed it into the final as the 10th act to qualify.

There is usually a discrepancy between at-home voters and jury voters; a 2017 study showed that juries tended to prefer traditional songs like ballads while televotes would go towards more risky or unusual acts. However, this year there may have been more happening behind the scenes. The European Broadcasting Union, responsible for the Eurovision competition, announced that the national juries of Azerbaijan, Georgia, Montenegro, Poland, Romania and San Marino were removed from Eurovision 2022 due to “irregular voting” during the second semi-final and votes were replaced by an aggregated voting system mimicking the patterns of previous years. These countries have recently retaliated with threats to leave the Eurovision competition and assertions that the EBU was “authoritarian” in their decision to remove the national juries from the competition.

Then came the final. This included a variety of strong acts repeated from the first and second semifinals, along with the acts of the UK, Germany, France, Spain and Italy. The acts of the Big 5 varied; a particularly captivating performance from Spain’s Chanel became a fan favourite, alongside the powerful vocals of the UK’s Sam Ryder, who performed his song “Space Man”. Other new songs included an Italian ballad, a German rap/pop song sung in English and the French Celtic electronica entry sung in Breton.

The discrepancy between jury and at-home votes was pretty clear in the final this year, leading to some massive rearrangements in the leadership table once televotes were added to the jury votes. Australia’s ballad “Not the Same” by Sheldon Riley clearly impressed judges, who gave it 123 points – however, at-home voters only gave the song 2 points. Similarly, while Switzerland’s ballad “Boys Do Cry” got 78 votes from the jury, it received no points from televoters. The opposite phenomenon also occurred – the Moldovan folk-rock song “Trenulețul” got only 14 points in the jury votes but scored an impressive 239 televotes, making it the second-highest entry in terms of televotes and moving it from 20th to 7th overall.

From the dreaded “nul points” last year to being awarded jury favourite in 2022, the rise of the United Kingdom in Eurovision has shocked viewers. Sam Ryder’s “Space Man” outperformed expectations, and viewers were shocked as country after country awarded the UK the coveted 12 points – in fact, eight juries in total gave the UK the top score. UK typically has performed poorly in the Eurovision in recent years, with critics often attributing it to the fraught relationship between the UK and Europe post-Brexit. However, Sam Ryder showed everyone that with a high-caliber song, the UK can be in with a chance to win.

The overall winner, though, was Ukraine. Five countries gave Kalush Orchestra’s song “Stefania” 12 points; however, this number was dwarfed by the televoting results. Ukraine received 439 points in the televote – this is more than any country in the history of Eurovision. With this, Ukraine sailed through with a 165 point lead to be crowned winners and given the rights to host the next Eurovision.

Ultimately, Eurovision brings us together as a continent. Never have I been invested in the songs of obscure European nations more than during their performances on the Eurovision stage. Watching countries root for each other in the stadium, like when the Romanian entrant danced along to Ukraine’s song or when the UK entrant comforted the Swiss entrant post-voting, inspires hope in the idea of European camaraderie. Eurovision leads to some strange music, but it also brings out the best in Europe. Now, let’s begin the long wait for Eurovision 2023 in Ukraine.