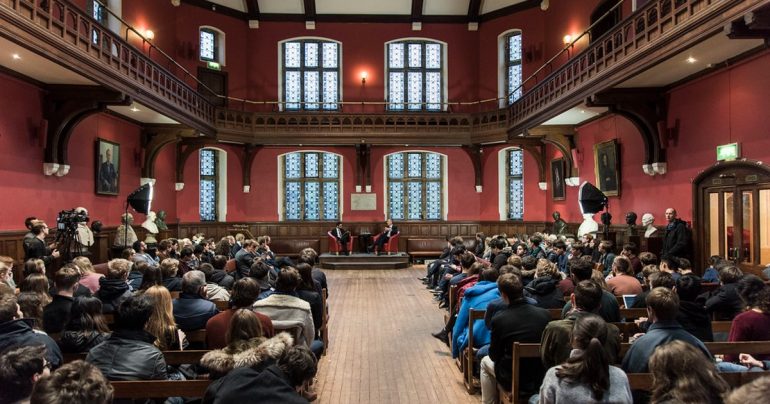 Two questions have been submitted in accordance with the Rules and Standing Orders, firstly by an Elected Member of the Secretary’s Committee and also by the Librarian.

The Elected Member, Joe Murray, Pembroke College, has asked a series of questions that allege the President has been “consistently [dismissing] the opinions of female members of committee” and “bullying members of [his] committee”. The five questions conclude with asking: “Do you think in light of these matters you should resign?”

Under the society’s rules the President, a sitting officer, can be removed only under a motion of No Confidence or internal disciplinary procedures. A motion of impeachment is debated in the chamber after impeachment motions are initiated by any ordinary member.

In 2019 the President at the time, Brendan McGrath, resigned before a motion of impeachment could be debated in the chamber. A motion of impeachment had received the required number of signatures on the society’s noticeboard, however McGrath resigned before it could be debated in the chamber. McGrath’s resignation was triggered by multiple resignations in the wake of a blind student being dragged from the chamber by security.

Notably, the Librarian, considered to be fourth in seniority to the President, has also submitted questions in the Public Business Meeting. The Librarian, Charlie Mackintosh, New College, has submitted questions referring to the accusation the President withdrew a paper speech from a member of The Standing Committee less than 24 hours before they were due to speak. Each term, a handful of individuals are offered the opportunity to make a paper speech in the highly-attended Thursday Debates. This week’s motion is ‘This House Believes The Raj Lives On’.

In a post made to Facebook, the member of The Standing Committee stated that “I wont be speaking at the debate tonight”. “I’m upset and disappointed and feel like like I’ve been treated awfully”.

“While I do think the way I have been treated is symptomatic of a larger problem of the culture at the union, I won’t get on to that right now”.

When requested for comment, Joe Murray said that “I am bringing this to the chamber, as a public business meeting, because too many in the Union do not feel heard. I am doing this on behalf of them. Accountability is crucial in any student society, and I seek to uphold that in the Union”.

The Oxford Student has also requested comment from the President and Librarian, and will update the article upon receiving any response.

Image Description: The Oxford Union chamber filled with an audience watching a talk.