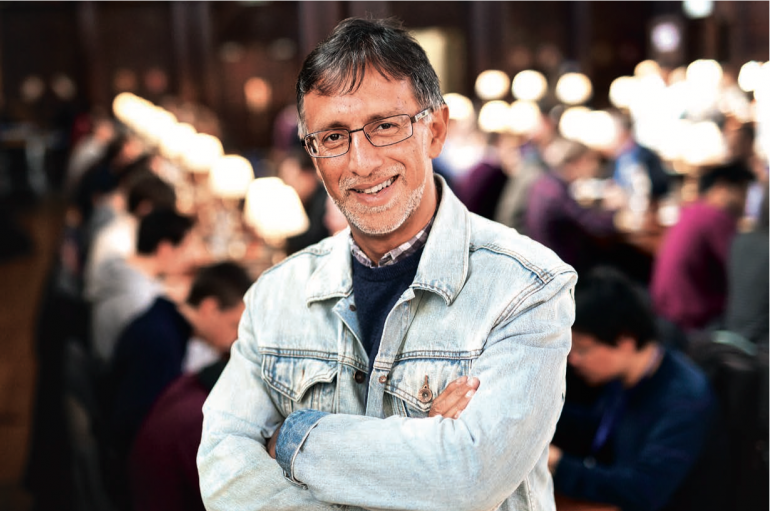 Seated opposite in a relaxed pose, Hazareesingh is flanked by shelves of leather-bound hard backs. Stacks of the London Review of Books and a poster for La Dernière Salve occupy the red-wine carpet in his college office. A Fellow of Balliol by 1990, he first experienced the college as a PPE student in the early 80s. He can recall a shorts-wearing and scruffy haired Boris Johnson asking him for help with his philosophy essay in the queue for hall. While Johnson arrived with a somewhat ornamental scholarship for Classics, Hazareesingh’s arrival to Balliol was facilitated by a Mauritian scholarship.

His landmark book, How the French Think, published in 2015, afforded him high praise. Black Spartacus: The Epic Life of Toussaint Louverture, which followed in 2021, went on to win the Wolfson History Prize – a recognition which he describes as ‘thrilling’. The award, he says, is ‘not to be sneezed at’, considering the fact that it came with a prize of £40,000. The ground-breaking study repositions the Haitian Revolution within its appropriate context: the Age of Revolution. He argues its case against the French or American counterparts which often soak up most of the academic attention. At once democratic and republican, the book suggests, it is the most interesting of the revolutions and certainly the most comprehensive. Louverture, its striking figurehead, falls into a tradition of charismatic leaders who dominate the early eighteenth and late nineteenth centuries, including, among others, Napoleon.

The work is engaged in taking an event about Black empowerment often limited to marginalia and putting it centre stage. But Hazareesingh remains steadfast that the study does not seek to de-colonise the curriculum. Such goals, for him, are ‘unnecessarily divisive’. Despite sympathy for the sentiment, the prefix de pertains to ‘subtraction’ and ‘taking things out’. Hazareesingh wants to ‘restore the centrality of an event in a way that people at the time saw it’. He tells me that our goal should be the ‘introduction of race and colonialism’ into academic discussions. As the conversation about Napoleon or Jefferson’s views on slavery awakes, Hazareesingh is apprehensive about a discussion which passes judgement. He believes his task is to give a ‘fuller’, a ‘more proper picture’.

This conversation, which Hazareesingh thinks is already well underway in America, is ‘more problematic in Britain and France’. As a nation, we have the challenge of ‘judging ourselves as a colonial power’. Yet, he pauses before considering it a question of emotional difficulty. Rather, ‘how do you judge it in its fullness?’ He tells me: ‘it’s not about saying colonialism was bad although, on balance, based on my own experience of growing up in Mauritius under British colonial rule, I think it was.’

The book adeptly outline’s Louverture’s trailblazing efforts to build a sense of black unity. We pivot towards the disunity which has come to define the current political landscape. Hazareesingh outlines the reasoning behind Louverture’s political philosophy: ‘black people have to be treated equally, because of their history as an enslaved people they are entitled to almost a special status’. It is a remarkably clear explanation of a political creed which fights for universal principles but for a particular group. The discussion which surrounded the ‘Black Lives Matter’ movement last summer seemed to be wrestling with this issue. ‘All Lives Matter’ rebuttals failed to grasp what Hazareesingh observes as the need to consider a ‘special status’.

I turn our conversation towards the institution which has been at the heart of Hazareesingh’s professional life. He claims that Balliol’s self-image is unchanged, an ‘open, friendly, informal place’. I imagine there are some who would disagree and suggest the college’s distinguishing characteristic is still what H. H. Asquith described as ‘the tranquil consciousness of an effortless superiority’. Friendly or unfriendly, Hazareesingh’s poise before me is remarkable for its effortlessness.

When he arrived in 1981, the college had only just started to accept female undergraduates and he recalls the testimony of those from the first few cohorts, who said it was ‘frightful’. This introduction is part of a constantly evolving process; Hazareesingh suggests the major change to the undergraduate cohort taking place today is the increase in international students from what he terms ‘the global south’.

Such a shift implicitly involves the question of admissions. The debate around Oxbridge acceptance is, for Hazareesingh, ‘heated for good reason’; ‘Secondary education here is very imbalanced,’ he says. He informs me that just before our conversation he had been glancing at the latest statistics for the college, which saw only 67% of the incoming first years arriving from state schools.

Indeed, the recent weeks have seen calls from both sides of the aisle. Professor Stephen Toope, Vice-Chancellor of Cambridge, aims to continue a reduction in private school students. David Abulafia, a Fellow of Gonville and Caius College, responded by saying that school names should be scratched from admissions information. When I press Hazareesingh about this exchange, he is somewhat aloof. He focuses on the ‘image’ which state-educated students across the country have of Oxbridge. He thinks more action has to be taken to raise money and advertise scholarships, and make Oxford appear physically less alien and more familiar to students from diverse backgrounds.

I ask him whether Balliol’s 67% should be 93%, considering that around 7% of UK students attend fee-paying schools. His voice hesitates over the first syllable of ‘yes’ before tackling the question. Oxford, he suggests, is still seen as ‘a bastion of a certain way of life and a certain type of privilege’. The specifics about the ‘way of life’ or ‘privilege’ are hazy. Actions which contribute towards Oxford being seen as this bastion include Oriel’s decisions surrounding the Rhodes statue, self-images of Oxford which ‘just don’t help’. ‘The structure of Oxford doesn’t help’, either. Although expressing enthusiasm about centralised admissions in principle, Hazareesingh still highly values his independence as a tutor when it comes to selecting PPEists for Balliol specifically.

As we walk back to the Balliol entrance, it is easy to imagine Hazareesingh as a first year back in 1981, walking through the quad, not yet aware of the glittering prizes which await him.

featured image description: Hazareesingh in front of an Oxford Hall.