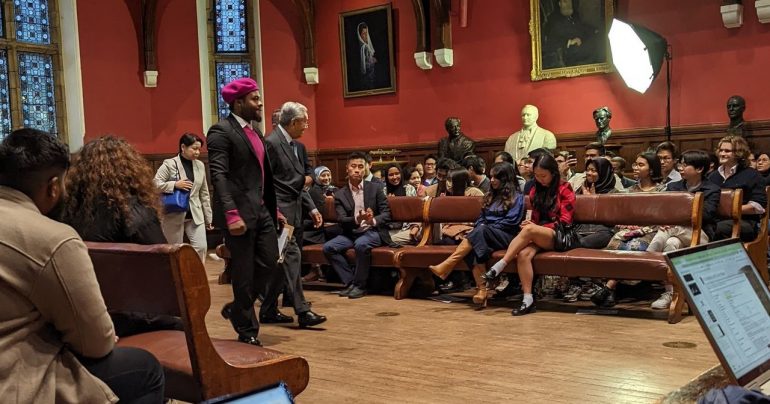 “Certain races, given the same chances, do not do as well as other races.” – Ex-Malaysian PM Dr Mahathir Mohamad at the Oxford Union

Malaysia’s ethnic divisions have long been a major cleavage driving policies and parties within the country’s political system. Tension between the country’s three main ethnic groups–Malays, Chinese, and Indian Malaysians–had boiled over into violence in the past. Today, Malaysia is known for race-based affirmative action policies, which give preferential treatment to the country’s majority Malay ethnic group in education, employment, housing, and finance.

Responding to a student’s question at the Union, ex-PM Mahathir addressed the debate around “moving from racial-based policies to need-based policies:”

“There is an idea that we forget about race, we just help the poor. Unfortunately, the result is not the same. Some poor people benefit from whatever opportunities they are given, but some other poor people cannot benefit because of other reasons or because of their culture. So we need to recognise the fact that certain races, given the same chance, will not do as well as other races. That is the story of humanity. Why do you think some countries are doing well, and some countries are not doing well?”

The former PM elaborated on the benefits of preferential policies for Malays: “We would like to say that ‘let’s forget about race, let’s just concentrate on poverty.’ The result will not be the same. I have watched this over eight years–when Malaysia received an amount of people from other countries to live in Malaysia and work in Malaysia. These people were all poor, as poor as the Malaysians. But Malaysians did not do so well because they don’t have the culture that enables them to make good progress.” Mahathir continued by saying that Chinese Malaysians, which comprise 25% of the country’s population and who he believes are “good with business”, need to help the Malays, the majority ethnic group, claiming that the differences in the two groups’ success are due to culture.

“We need a just society with relatively equal outcomes. We need to balance it by giving better opportunities and chances to those who aren’t doing so well.”

Other notable issues Dr Mahathir addressed included the Russia-Ukraine war, after which he also criticised the hypocrisy of Western immunity from similar transgressions: “If we blame Russia for shooting down Malaysian planes, we should also blame the US for shooting down Iranian planes,” said Dr Mahathir, adding that while the Russian insurgents are awaiting trial by international court, there is still no trial for American warships.

At the same time, however, the former PM emphasised the need for peace and criticised foreign intervention. Using the example of Malaysian-Singaporean relations, he argued, “The main way of speaking to another country is through negotiation. We had problems with Singapore, but we did not go to war with them. We believe in not imposing our will to our neighbours.”

Speaking on the issue of corruption in Malaysia, he alluded to the disgraced former PM and his successor Dato Najib Razak, claiming that when Najob took over “he declared that cash is king and to win support you need to bribe people. Now the whole country is corrupt.” He also argued that “to overcome corruption you need a good leader that is not corrupt”, adding that “during my time there was corruption, but it wasn’t as bad as now.”

He concluded the talk by calling for more anti-corruption education to the Malaysian youth, saying that “you must make it clear to people that if you are corrupt, you’ve sinned. You go to hell.”