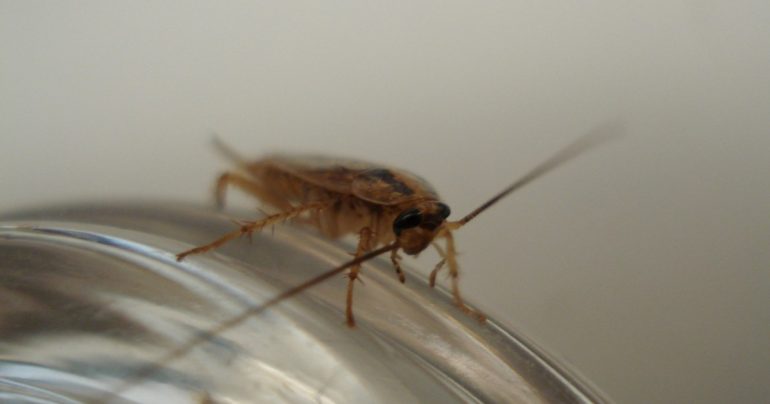 Image Description: A photograph of a German cockroach.

In 1993, scientists at North Carolina State University made a strange discovery when considering the traits of the German cockroach. It appeared that these cockroaches had evolved in such a way as to reduce their disposition to glucose, a kind of sugar.

What prompted this change in the behaviour of the German cockroach? Cockroach behaviour had evolved as a direct result of human activity. Insofar as people attempted to obliterate populations of cockroaches through the use of poison-laced sweet powders and liquids, this exerted a direct pressure on the genetic development of cockroaches as a species.

Cockroaches with a sweet-tooth died at a higher rate than cockroaches who did not have this same affinity for glucose. So it came to be that cockroach behaviour – at a species level – was unintentionally selected in increasingly sugar-averse ways.

This instance of artificial selection by itself indicates how human action can have profound effects in animal behaviour. But, in fact, the story of human impact does not end there. In May of 2022, a new study conducted by Dr. Ayako Wada-Katsumata and her colleagues at North Carolina State University reveals that this initial behavioural change has started to impact the sexual behaviour of the cockroaches.

But as we just indicated: cockroach behaviour has been artificially selected to be increasingly sugar-averse. Thus, what would have otherwise been a tempting meal offered by the male to the female cockroach becomes something decidedly unpalatable. That the female is less enticed by the male and spends less time feeding as a result means that the male has less time to lock on to the female. Consequently, female cockroaches who have been behaviourally affected in terms of their affinity for sugar are less likely to mate with male cockroaches generally.

Of course, life finds a way. Glucose-averse male cockroaches are adapting to the female’s hasty retreat from an unpleasant meal by locking on to her faster. Furthermore, evidence suggests that the very chemical structure of the male’s offering to the female is changing to account for her changing palate.

What does this all mean, in terms of the population of cockroaches? Can we expect a dip in the population of what we consider to be vermin as the male must ‘catch up’ to the female’s changed affinity to sugar? As the new study from North Carolina State University indicates: it is difficult to say.

Still, even in lieu of some of the uncertainty regarding the population statistics of cockroaches, there is still a kind of ecological lesson to be taken from this instance of unintentional selection. Namely: it is clear that human action continues to have a profound effect on the environment and on animal life. In fact, as time goes on, it appears as though human action becomes a more powerful principle of change. As a 2020 study indicates, despite the awareness that humans can and do effect behavioural change, the implications of such changes on an ecological level have not been sufficiently documented.

Why not? Part of it stems from a difficulty of understanding the complex interconnections in food chains and food webs. We often think that we know precisely the ways in which animal and plant life, as well as how certain abiotic factors, interact to give a total account of the productivity of an ecological scene. But in fact, it is only after-the-fact that we come to realise that we did not have a complete understanding of interactions amidst biotic and abiotic factors.

Take, for example, a famous case of failed ecological manipulation: that of the cane toads in Australia. Cane toads were introduced to Australia in 1935 to get rid of a pest that was wreaking havoc on Australian sugarcane crops. The reason why such cane toads were introduced was on the assumption that cane toads would in fact eat such pests, and could therefore be integrated into the existing Australian food web. That is to say, there was an assumption that we understood the dynamics of the food web, so much so that we could afford to make edits or tweaks without any major consequences.

But of course, by 1950, a veritable cane toad catastrophe was declared. The cane toad – having no natural predators within the Australian food web – proliferated at an insane rate. And they had no effect on the very pests that they were introduced to take care of. Australia, in other words, added another pest to its repertoire, and was forced to undertake aggressive methods of pesticide use to attempt to curb its original problem to begin with.

Before we give a little cheer at the thought of cockroaches having at least a little more difficulty in reproducing, we ought to stop and think about the interconnectedness of food webs. Who among us can state what the role of cockroaches, generally, is on a broader ecological landscape? I doubt that most of us could do this – much less indicate what the role of this specific kind of cockroach has in its ecological landscape.

I imagine people might take issue with my commenting that – perhaps – we ought to tone down behaviours which tend to have such a drastic effect on animal patterns of living. For in the case of cockroaches, this would involve using less chemical pesticides and poisons. And insofar as we do that, people might protest, we are inviting the proliferation of a plague within our comfortable homes.

I would suggest that our comfortable homes are dependent – in ways we may not fully realise – on a series of complex food web interactions, whether directly or indirectly. There are other ways of dealing with problems of pests that do not require aggressive methodologies that are likely to have uncontrollable, unintended, and difficult to measure effects on animal behaviours.