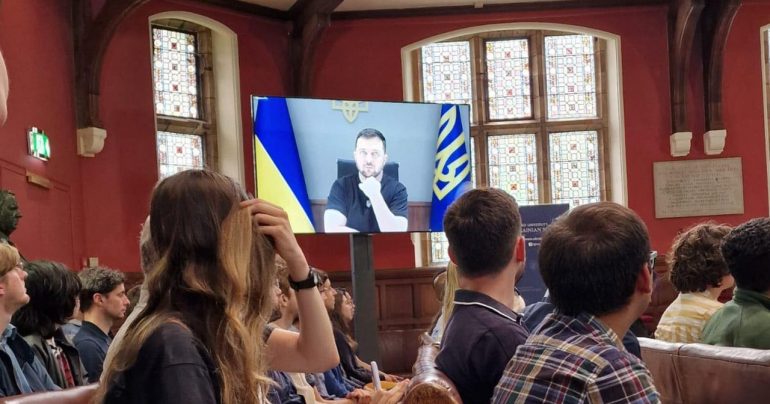 ‘The future belongs to us:’ Ukrainian President Zelensky Speaks to Oxford

On Friday evening at 5:00 PM, Ukrainian President Volodymyr Zelensky addressed students at Oxford and a number of other UK universities virtually. In an event hosted by the Oxford Ukrainian Society, International Relations Society, and Oxford Union, President Zelensky addressed topics beyond the obvious security threat and need for Western collaboration, from rooting out corruption to rebuilding Ukraine post-war.

Since the Russian Federation invaded Ukraine on 24 February 2022, President Zelensky has been lauded internationally for upholding the morale of a surprisingly resilient Ukrainian defense. The Ukrainian President, initially known as a television comedian, was elected President in April 2019. Despite concerns that he was too politically inexperienced to stand up to Russia, President Zelensky has rejected Western offers to flee the country at the start of the invasion, survived numerous assassination attempts, and has recently visited the front lines of the Russia-Ukraine War.

On June 9th, two Britons captured fighting for Ukraine were sentenced to death by a pro-Russian court in occupied Donetsk in what pundits have called a ‘show trial.’ President Zelensky also addressed this recent development in response to a question asked by a representative from Oxford.

“All the free world are all in the same boat,” began President Zelensky. “It has been 107 days of facing the aggression of the Russian Federation. Facing the second army of the world. We have listened to sirens for 107 days… We face an inhuman and barbaric enemy–the army of one man, the person that should not be mentioned.… 107 days we have been fighting a nuclear state.”

The Ukrainian President emphasised the desire for peaceful negotiations, but recognised the stark contrast of that hope to what is happening on the ground.

“[There is] a necessity of humanity not to face conflicts in the trenches but on the tables.” said the war leader, “Yet [the Russian soldiers] are killing children and women.”

President Zelensky also drew an analogy between the cities of Ukraine and those in the UK that were attacked by Nazi Germany 80 years ago. “80 years ago Manchester survived the Christmas bombing. Today, Ukraine survived the Easter bombing.”

He went on to criticise a recent controversy in which a professor at the University of Edinburgh allegedly shared Russian propaganda that denied a Russian attack on a maternity ward in Mariupol as ‘fake news’: “What do you know about Ukraine? Recently students of Edinburgh University [called out] a professor that repeated the Russian narrative.” He urged the participants to pay attention to the conflict in his country, adding, “You should care about the war in Ukraine. This war is visible and monstrous. The truth is important.”

In a blunt statement, President Zelensky further claimed that Russia was harbouring genocidal intentions, saying “the mission of Russia is to delete our state, our history, our existence. To tell the world that we never existed. To describe us as some kind of plant or animal.”

“Russia has this phobia of freedom at the state level. A fear of freedom in a neighboring country…the time for such countries and rulers has passed. The future belongs to us.”

Finally, President Zelensky emphasised the importance of present and future collaboration with the UK.

“Our armed forces created trust with the UK forces… I spoke with Prime Minister Boris Johnson a few days ago. When we win, we shall share the victory with our friends. We are discussing the details of the future security framework in Ukraine.”

Questions from students at Universities across the UK focused less on security and much more on Ukrainian life and rebuilding.

Oxford’s question was posed by Lionel Tarassenko, President of Reuben College, and Ruslan Pavlyshyn, President of the Oxford Ukrainian Society. After promoting Oxford’s fully-funded graduate program for Ukrainian students, Pavlyshyn asked President Zelensky, “Two British citizens have been sentenced to death in the occupied area, a direct provocation of the UK. Do you expect the UK to be more directly involved in the war?”

President Zelensky responded, “What is happening is a violation of any national and international law. These citizens are persecuted. It is a tragedy for them.” He praised the Prime Minister, calling Boris Johnson, an Oxford alumnus, “one of the first friends to come to our rescue in the war.” He also criticised “skeptical countries and pacifists’ who are calling for some compromise to preserve their interests”, calling it a “dangerous signal to everyone” and that “EU countries should act more decisively in actions and words.” Nevertheless, the Ukrainian President recognised that the UK was likely not going to further involve itself: “The answer is in the negative.”

Channel 4 News, also in attendance, asked Zelensky whether he would ever be willing to compromise: “You’re losing about one hundred men each day in the Donbass region. At what stage, Mr. President, do the circumstances compel you to seek peace with the Russians?”

President Zelensky responded with calculated determination. “Throughout my presidency, I clearly understand that every war has to end at the table of negotiations. But unfortunately, the President of the Russian Federation doesn’t understand this. And that’s it – you need both parties willing to stop the war.” He also ruled out the possibility of conceding territorial integrity to Russia: “I’d like to say that this is about independence for the country, not anything that we can concede.”

Ultimately, President Zelensky seems not to have lost his capacity for levity. Facing technical difficulties towards the end of the address, Zelensky joked, “Russian Cyberattack!” Noting that he was given a translator despite speaking English, he further added in English, with a wry smile, “Your administration decided that my English is not so good.”

The full live recording of this event can be found on the Oxford Union’s YouTube page.

[Edit] 22:31 10th June: A previous version of this article incorrectly identified the President of the Oxford Ukrainian Society.