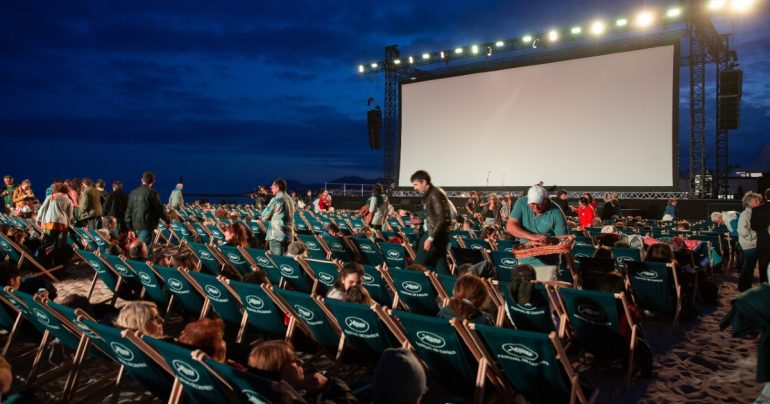 The 75th Cannes Film Festival has returned this May with its pre-pandemic glamour, but the film industry as well as the world are never the same. The official poster is just as blue as the summer sky of the French Riviera: a tribute to The Truman Show, Jim Carrey climbs up a staircase amidst dreamy white clouds in the azure sky, hand reaching up to the large 75 – an important birthday for this international film festival born in the gloom of the war at this critical moment to speak for freedom and hope. While the festival has presented a wide range of highly talented films, there have also been turbulences on the red carpet.

While the festival has presented a wide range of highly talented films, there have also been turbulences on the red carpet.

This year’s official selection contains virtuoso cinematography as well as diversification of perspectives. Ruben Östlund wins his second Palme d’Or with Triangle of Sadness, a poignantly satirical comedy targeting the super-rich on a luxury cruise trip that goes wrong. With dark humour and awkward situations, social hierarchy is laid bare under the tropical sun. On the other hand, Close (directed by Lukas Dhont) wins the Grand Prix (joint with Stars at Noon by Claire Denis) with a story of an intimate friendship between two young boys. Korean cinema also achieves great success: Park Chan-wook is awarded Best Director for Decision to Leave, a seemingly predictable plot of detective falling in love with suspect is treated with fresh energy, so that the female suspect liberates herself from the male gaze. Song Kang-ho has won Best Actor with his role in Broker, adaptation of an originally Japanese story about two men who set up a baby box and look for good buyers on the adoption black market.

Given the political situation in Ukraine, the festival declared a clean cut from any member associated with the Russian government back in March, but this does not extend to the Russian cultural sphere, as the dissident director Kirill Serebrennikov brings Tchaikovsky’s Wife to the official selection, though not without controversy. On the other hand, the selection for Un Certain Regard includes Butterfly Vision, a Ukrainian film very much reflecting the current turmoil. The documentary Mariupol 2 also enters the festival, which is the best tribute paid to its Lithuanian director Mantas Kvedaravičius, who was killed in April in Mariupol. Some Ukrainian filmmakers have protested against social media censorship on the red carpet, covering their faces with a sign for sensitive content, while an unknown woman broke into the ceremony with blue and yellow paint to protest against rapes committed on Ukrainians.

As a prestigious film festival, Cannes is associated with glamour and often perceived as far-removed from the rest of the world, but it has always been about cultural representation, from the very beginning: Cannes Film Festival was initially proposed in 1938 since the Venice Film Festival became visibly partial under fascist rule. There are many international voices telling their stories of struggle: the Iranian actress Zahra Amir Ebrahimi is awarded Best Actress for her role in Holy Spider, a film about the serial killings of sex workers in Mashhad; we witness Joyland, the first Pakistani film selected by Cannes Festival; Boy from Heaven portrays the Egyptian political and religious tensions; the winner of Prize of the 75th is Tori and Lokita, which features the life of two young refugees in Belgium.

As a prestigious film festival, Cannes is associated with glamour and often perceived as far-removed from the rest of the world

The highlights of Cannes 2022 cannot be listed in full. From Tom Cruise’s performance in Top Gun and Baz Luhrmann’s new film on Elvis, to the many film icons from the hosting country such as Marion Cotillard (Brother and Sister) and Léa Seydoux (Crimes of the Future), there is a lot to look out for in cinema. Of course, the films in the Cannes official selection are only the iceberg above water – there are so many more talents shining in the Cannes film market beyond what most people can see. If the first Tiktok short film competition did not have a smooth start, it nevertheless symbolises official recognition of a new trend, in an age where filmmaking ceases to be a privilege reserved for wealthy film companies.

On the whole, Cannes 2022 has gathered a range of masterful and promising films, diverse but not for diversity’s sake, which transform the silver screen into multi-faceted mirrors, reflecting the tears and joys of human life. There has never been a cultural bubble separate from current issues, and I hope that on top of pure artistic enjoyment, these films bridge people together and show that the charm of the seventh art lies in cultural communication.

Featured image description: an audience at Cannes preparing for a film screening.