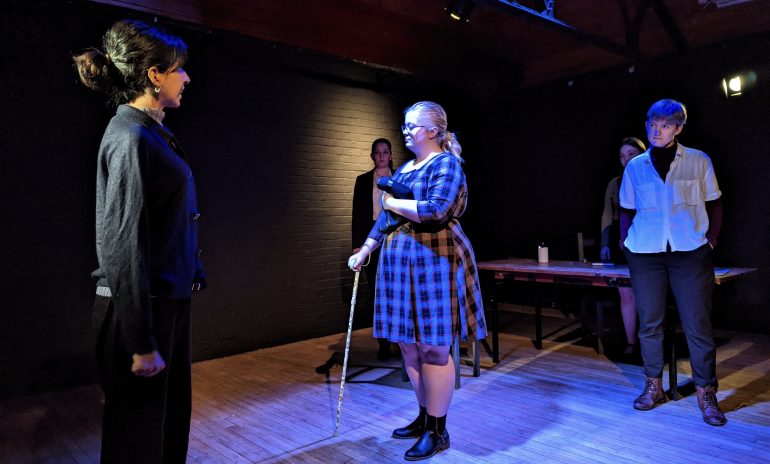 Dangerous Waters is an adaptation of Henrick Ibsen’s Enemy of the People, a play about the tensions surrounding the health of the environment, and the economic prosperity upon which it can depend. Set in a small town that depends on tourism and a factory for income, a contaminated water supply is a threat to public health as well as the public purse.

Pentaquark Productions have performed a very interesting adaptation of Ibsen’s original, choosing to focus on not just the degenerating morals of the townsfolk but also – by changing the protagonist from a male Dr Stockman to a female one, played by Jigyasa Anand – themes of misogyny and gender discrimination.

The production explores the way women are treated as hysterical if they display passion. For example, Dr Stockman’s concerns about contaminated water in the baths being ‘poison’ is easily explained away by the town’s mayor, the locals are quick to dismiss her fears as soon as the mayor tells everyone that Dr Stockman is quick to exaggerate things.

Dr Stockman’s gender is also highlighted as a reason for her dismissal from a post at the local university, bringing to light the struggle of being an academic and a woman in a space dominated by men—something that goes unchallenged within the play. The introduction of this theme is something that the play does quite well and adds another dimension to Ibsen’s original.

Antonia Anstatt’s lively portrayal of Aslaksen, the local printer, adds a comedic layer to what is otherwise a very serious play. Her constant reminder of ‘moderation’ and its importance elicits laughs from the audience.

The comedic element is also heightened by Emma Pollock’s portrayal of Kiil, Dr Stockman’s mother-in-law, who is a very spirited character that Pollock brings to life. However, the audience is not entirely aware that she is the owner of the local factory from the beginning of the play, which makes her behaviour later in the play harder to understand. Her character could be developed through presenting a more complex background earlier in the play, and by better integrating her role into scenes.

While humour was strong throughout the play, stage effects were sometimes lacking. There was very little use of music and sound to convey moments of tension or even contemplation. Music during periods of transition would really help with focusing the audience while sets change and characters move on and off stage. Given the play focuses on ‘waters’, more music surrounding this theme could have been used; wave, rain and storm sounds could work very well at different moments in the production.

While humour was strong throughout the play, stage effects were sometimes lacking.

The play is performed at the Burton Taylor Studio, a small stage with very intimate seating. It is the type of space where you can very much feel a community in the audience. Given this type of setting, it is a shame that the audience were just not engaged enough to feel truly emotionally invested in the characters and plot.

While the production deals with very serious themes such as gender discrimination and corruption, some elements seem rushed because there is very little time for the cast to engage with the audience watching them, making it hard to emotionally connect with the characters. There are no speeches or asides to the audience, except for the closing of the play, so there is little that makes the audience feel like a part of the performance. Consequently, it is difficult to feel truly invested in the play.

Overall, its themes of money, power, corruption, and discrimination are highly important not just in the world of the play but also our own. It touched on things that are urgent problems for the modern world: pollution and its impact on climate change; gender discrimination in academia; political nepotism and corruption; and, most of all, how money and power can make people abandon their morals.

Dangerous Waters will be performed at the Burton Taylor Studio until Saturday the 11th of June 2022.

Featured image description: the cast in a performance of ‘Dangerous Waters’